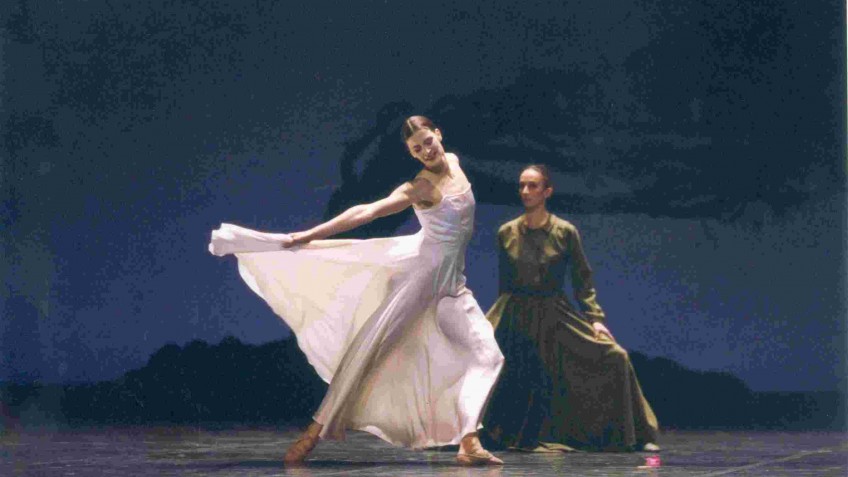 Khokhloma painting on wood is a traditional type

When the ornately painted fire curtain rose at the Palais Garnier, home of the Paris Opera Ballet, revealing a scrim onto which billowing curtains were projected, and a monk-like figure was seated on an elevated ledge attached to the proscenium arch several feet above the stage floor, it was evident that a theatrical evening lay ahead. To mark the beginning of the performance, instead of the traditional three raps on the floor with a stick, the man slowly drew from his lap a stone and dropped it to the floor, followed by two more. After the resounding thuds, he climbed down from his perch and walked across the stage as the scrim parted. So begins the new ballet Hurlevent created by Paris Opera Ballet Etoile Kader Belarbi based on Emily Bront�&#146;s Wuthering Heights.

In staging the story of the orphan Heathcliff and his thwarted love for Catherine, daughter of the household into which he is taken, Belarbi and his fellow librettist Agathe Berman follow the essential plot. Although Catherine cares for Heathcliff, she marries another but regrets her choice and dies in childbirth. Heathcliff seeks revenge for his lost love by destroying the members of her family, only to destroy himself. The drama , as much in the psychology as in the action,has inspired the librettists to take an interesting approach to the story.They have used some of the trappings of romantic ballet (think Giselle) and utilized the corps symbolically&#151;the women represent the ethereal figure of Catherine and the men are the dark, volcanic side of Heathcliff&#146;s nature. The first act is grounded in reality; the second act, where Heathcliff works his revenge and descends into his own fantasy, is a more spiritual world.

A story of such complexity, both in the plot and in the motivation, represents a significant challenge to the choreographer. Despite his comparative lack of choreographic experience, Belarbi has acquitted himself with honor. Like John Cranko, who was able to tell the story of Onegin so effectively on the ballet stage, Belarbi hews to a modern style of movement and keeps the action flowing. There are a few group dances, primarily for the corps in the second act, where the movement is in unison. The story is clearly told and the individual characters are well drawn, with effective use of props and dramatic gestures to complete the understanding of the motivations.

The role of Heathcliff was danced by Nicolas Le Riche, one of the company&#146;s great male dancers. His performance was intense and introspective. As Catherine, Marie-Agnes Gillot was especially effective when she realized the mistake she had made in not marrying Heathcliff, and her scenes as a spirit were as light as air. Her husband, Edgar, was presented as a vain and proud man, elegantly danced by Jean-Guillaume Bart. The other supporting roles were very well cast, particularly Jean-Marie Didiere as Joseph, the enigmatic family retainer who opens the ballet and maintains a zen-like air of concentration.

The Paris Opera commissioned a score by Philippe Hersant for this production. His music is well suited to the story, being dramatic without descending into mere noise. He makes use of recognizable melodic motifs, establishing both atmosphere and plot connections. His musical sources include Debussy and Strauss (as in Elektra), as well as the sounds of wind appropriate to a story set on the moors.

The physical production (sets and lighting by Peter Pabst, costumes by Elsa Pavanel) adds immeasurably to the impact of the evening. Pabst knows how to make great theatrical effects with simplicity, employing layers of scrims onto which projections are made. One memorable moment early in the ballet is the creation of an instant field of flowers, which literally drops onto the stage. There is a Robert Wilson-like esthetic at work in this production in the stylized sense of staging and movement. Visual symbols abound. The front scrim that parts has a jagged edge. When the scrim is closed at the end of the first act, it does not close all the way so that the jagged edge, with appropriate lighting, becomes a lightning bolt.

No effort has been spared in producing a work by a young and promising choreographer. The ballet was also filmed to be shown on French television at the end of March 2002.This degree of commitment demonstrates the confidence the Paris Opera Ballet has in its fledgling choreographer, who has not let them down.