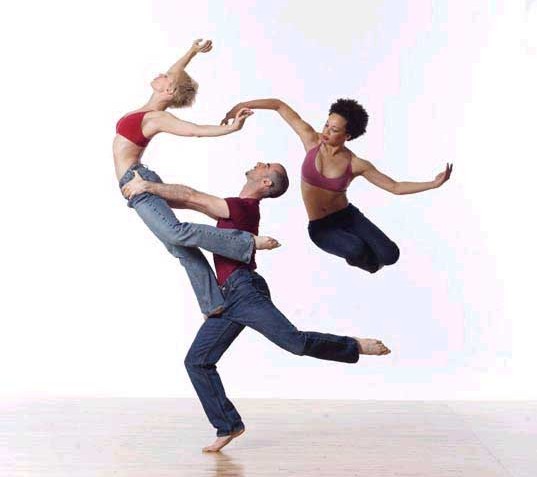 Wolf Trap presented a remarkable collaboration between the vibrant Parsons Dance Company, the sexy and intense Ahn Trio, and the new music composer Kenji Bunch, who contributed all of the music for the second half of this exhilarating show and one piece in the first part. Reasonable balance was achieved between the concert performed by the three Ahn sisters on violin, cello, and piano and by the dancers of the Parsons Company.

The first segment opened with three short pieces that featured the Ahn Trio. The first piece &#147;Oblivion&#148; by Argentine tango composer Astor Piazzolla was strictly a concert piece while the next two, &#147;Riders on the Storm&#148; (a song by The Doors transcribed by composer Michael Rataj for the Ahn Trio) and &#147;Orange Blossom Special&#148; arranged by Kenji Bunch, were accented with background movement by the Parsons dancers. The presentation of &#147;Orange Blossom Special&#148; was somewhat distracting because the dancers dressed in black except for white gloves were seen as disembodied hands. Nevertheless the passion with which the Ahn Trio played the lyrical but dynamic composition meant audience attention never strayed long from the musicians who were themselves a compelling visual delight.

The official dance concert erupted in Rise and Fall. Exuberance, whimsy, and the youthful athleticism of the dancers provided counterpoint to the Ahn sisters whose fervent production of the original music of the Turtle Island String Quartet threatened to lift the audience out of their seats if not to join in the dance. Typically David Parsons&#146; choreography in Rise and Fall and some of the work in the second half of the show combines head rotations and bent arm swipes that bring to mind a cross between Twyla Tharp and the geometry suggested in statues of Thai temple dancers. For many years Parsons was a featured dancer in the Paul Taylor Dance Company and several well-known repertory works like Arden Court were specifically created by Paul Taylor for David Parsons.

Parsons’ experience with Taylor is clearly exhibited in the athletic aspect of Parsons choreography. The difference is that Taylor&#146;s work expresses masculinity in its controlled strength while Parsons makes his moves achieve a balance between the feminine and masculine energies. This energy was particularly noticeable in Parsons signature work Caught, a solo piece performed by Sumayah McRae in which the dancer does a demanding series of leaps in strobe light that makes it appear that she is flying or walking on air. Violinist Angella Ahn increased the spectacular feel of Caught with her electronically throbbing solo composition by Robert Fripp.

Part two of the program showcased music by Kenji Bunch with two extended dances, Slow Dance and Swing Shift separated by a short instrumental piece entitled Dies Irie, all three compositions written specifically for the Ahn Trio. The music for Slow Dance alternately suggests tension and release with elements of tango and romantic interludes while the choreography explores a certain spatial confinement and interlocking poses by the dancers. Swing Shift, which was commissioned for the celebration of the Louisiana Purchase Bicentennial, is a jazzy classical composition that speaks to the history of American dance including the foot-shaking of the Cotton-Eyed Joe, country swing with its head-tucked-shoulder-led turns, Lindy slides, as well as cotillion waltzing.

Nothing could be more electric than this kind of collaboration that includes able and energetic dancers performing engaging original choreography with live original music played by passionate musicians.