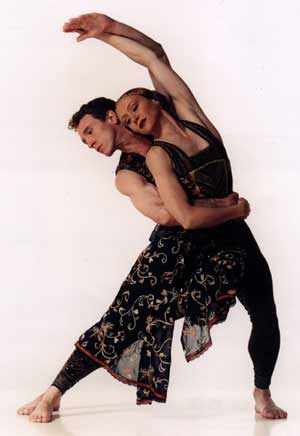 The Paul Taylor Dance Company makes a welcome return to the San Francisco Bay Area. Taylor is a showman at heart. The notable characteristics of his dances (high energy, a love of big movements and gestures, a sense of the humorous and the quirky) have placed him among a small rank of acknowledged master choreographers. His dancers for the past several decades have epitomized the technical excellence to be found in modern dancers, and his ensemble today does not disappoint. These men and women give full value to their movements, executing them with flair and commitment.

The opening program of this season offered a compendium of Taylor’s main styles. An alumnus of the Martha Graham Dance Company, where he was a soloist from 1955 to 1962 , he knows how to take an idea and give it dramatic shape. He has specialized in the use of ordinary movement, such as runs and slides, assembling steps in fluidly moving patterns. Graham loved to have dancers cross the stage diagonally at a run–Taylor employs this device to good effect. His response to the music he uses is sensitive to shape and rhythm. In his comic vein, he can be a sly and sardonic commentator, as well as reveling in movement for the pleasure it conveys.

Cascade, set to music from Bach’s concerti for piano and orchestra, began the program. Taylor’s choice of selections from three different works demonstrates his musical sensitivity. Premiered in 1999, it is a spirited work that has a folk feeling. Taylor makes use of flattened shapes, like the figures on Greek vases, and has his dancers move holding those shapes. It is reminiscent of Nijinsky�s choreography for Debussy�s Afternoon of a Faun, which the Joffrey Ballet revived to great acclaim some years ago. Designer Santo Loquasto has created costumes in earth tones (browns predominate) that at once look Greek and Hungarian, underlining the impression of folk origin.

A dance for the full ensemble of 12 dancers led to a dance for two couples, followed by a solo performed by company veteran (since 1992) Lisa Viola. A San Francisco native, she is a strong dancer capable of the slow, highly controlled movement that Taylor demands in this section. She was followed by a vigorous dance for five men led by Richard Chen See, another company veteran (1993) of great strength. A lyrical dance for a couple (the man was Patrick Corbin, who has been with Taylor the longest–since 1989–and who has the best feet in the company), led to another ensemble, closing the work with exuberant movement that conveyed great joy. It was an excellent beginning.

The second part of the program consisted of two works, Profiles from 1979 and Big Bertha created in 1970 and the oldest work on the program. Big Bertha begins deceptively, with a carnival atmosphere heightened by the music recorded from the St. Louis Melody Museum of band machines. Bertha is a side-show mechanical doll, set up on a stage in a costume that recalls chorus dancers of the 1890s. The arrival of a young couple accompanied by a girl lulls us into thinking this is an innocuous entertainment. The girl, dressed in a pink poodle skirt, does a happy dance. Then the young man begins a dance to the tune of Take Me Out to the Ballgame and comes under the spell of Bertha, losing his self-control. He abducts the girl, to the horror of the young woman who accompanies him, and after disappearing behind Bertha�s booth, the man and the girl return. Their clothes are in tatters and spattered with blood–clearly she has been raped. This causes the young woman, who now falls under Bertha’s spell, to do a strip-tease, removing her dress down to her red undergarments. Bertha then performs a sword-swallowing dance and takes the young man as her consort in triumph.

Big Bertha is a grisly little work that reveals Taylor�s fascination with the animal side of human nature (a theme that occurs in many of his dances). The abrupt change in tone, from sunny to demonic, unfolds quickly as we watch the ugly story in dismay. A caption to a photograph of the original cast (Taylor danced the man’s role) indicates that the young couple are husband and wife, and the young girl who is raped is the couple�s daughter. The youth of the dancers performing the piece today give the impression that we are watching a couple on a date chaperoned by a younger sister. Either interpretation of the story produces an unsettling reaction. The role of Bertha was originated by Bettie de Jong, now the company�s rehearsal director. A tall, commanding presence, she brought an edge to the part thanks to her size. Kristin Egtvedt, who took the role at this performance, does not have the advantage of de Jong’s height, but she had a suitably intense demeanor. The rest of the excellent cast were Heather Berest as the lively girl, Annmaria Mazzini as the young woman and Orion Duckstein as the young man.

Profiles is an odd dance for two couples. As he does in Cascade, created twenty years later, Taylor has the dancers move like Egyptian friezes. There is a sense of ritual about the piece–almost Japanese in flavor towards the end. Who are these two couples and what is their relationship? From stiff movements to cartoon-like jumps, it was difficult to discern what Taylor had in mind. The music, specially composed (according to the program) by Jan Radzynski, was scored for strings and sounded to these ears like the aftermath of the flight of the bumblebee. The sound of swarming bees gave way to a general buzzing in the hive. The dancers performed with great precision and unity.

Closing the program was another piece of high energy, Syzygy, which is, according to the program, the nearly straight line configuration of three or more celestial bodies in a gravitational system. It is a dance for 13 set to music for synthesizer by Donald York that sounds like the sort of thing that accompanies NPR’s "Star Date"–spacey, full of notes, and devoid of content. The costumes (Santo Loquasto) involve black tank tops, black belts and several muted hues for sweatpants (men) and tunic/shorts (women). The movement is characterized by flailing, loose arms. Syzygy could be sub-titled "gym bunnies at a disco on coke." The most dated work on the program, the vigorous performance was cheered by the audience.

(4469)
$8.98 (as of January 25, 2021 - More infoProduct prices and availability are accurate as of the date/time indicated and are subject to change. Any price and availability information displayed on [relevant Amazon Site(s), as applicable] at the time of purchase will apply to the purchase of this product.)

(16087)
$3.88 (as of January 25, 2021 - More infoProduct prices and availability are accurate as of the date/time indicated and are subject to change. Any price and availability information displayed on [relevant Amazon Site(s), as applicable] at the time of purchase will apply to the purchase of this product.)