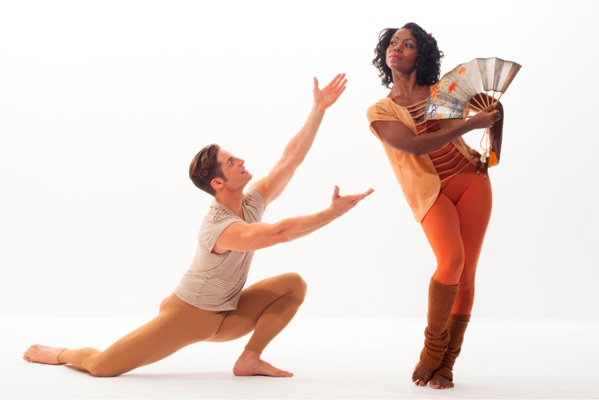 At 83, choreographer Paul Taylor continues to be legendary in his own time, his company perpetually youthful, even when (as in the case of “American Dreamer,”) the dance is sketchy. He is a longtime favorite at Dance Celebration in Philadelphia, where he is game enough to appear for interviews, master classes and audience interaction. His sampler program spanned more than 50 years of dance-making. In 2011, the Philly concert involved a 12- foot snake prop in a gaudy satire. This time it was choreographic snake oil with his new work, “American Dreamer,”a nostalgic ballet scored to a song cycle by Stephen Foster, as sung solemnly by Thomas Hampson.

Prairie bonnets and dude hats sitting around a freestanding dance barre, with dancers looking on, “American Dreamer” seemed like a rehearsal for a show about turn-of-the-19th-century moon/June/spoon boy-girl romances. It was more like physical sketch comedy than dance. One of stronger bits was a song about the men staying out carousing at the saloon (and maybe upstairs with the showgirls) that turns Punch and Judy when they get home, with kicking, furious spouses out for blood. The song “Beautiful Dreamer” turned into a droll and creepy romp with a man trying to waken three sleepwalking women. He jumps and waves his arms around, but the three prone dancers, one by one, get up and walk past him. Finally, there was some real dancing in the final hoe-down section, with lively country courting roundelays that save the piece so rambunctiously that they erased what came before.

After the break, Taylor shifted into high gear, and there was no choreographic pondering in the middle dance act with two retrospective pieces that still radiated high-voltage electricity—“Fibers,”made in 1961, and “Profiles” from 1979.

In “Fibers,” a ribbony sculpture houses a crouched dancer with a fencing mask, and a taped-up, bloodied body. He moves with fleshy motions, his hands oscillating over his head; another man in similar garb appears and they execute a unison duet with samurai-style ritual gestures that suddenly shift to jumps and turn sequences suggesting attack. Two females appear in white masques and one-piece bodysuits, their movement less menacing but suggesting tragedy, in their beautifully evolving bodyscapes. The dissonant and darkly beautiful score by Arnold Schoenberg is inside the enigmas and dark poetry of this choreography. Danced with hypnotic control and attack by Robert Kleinendorst, Aileen Roehl, Michael Novak and Christina Lynch Markham.

“Profiles,” set to a dizzying orchestral score by Jan Radzynski, is just as dynamic. Taylor might be paying homage to Nijinsky’s physicality from “Afternoon of a Faun,” with triangulated bodies and mock heroic poses. Taylor develops a pungent eroticism under the theatricality: unlike the faun, these couples mount each other, and in the odd angled lifts and cleaved friezes, Taylor wants the audience to see the dancers struggle into the precarious position as part of the movement. The two couples then come together, in ritualized primal movements. They may be transmorphing figures, but there is a fluid sensuality and lusty athleticism to this piece that still has bite.

“Gossamer Gallants”was the crowd-pleaser on this program. The backdrop of the top view of castle battlements, as might be seen by fireflies, has a half dozen drones buzzing around with manic formations, the bug equivalent of bug testosterone lighting up, too. Soon they are slain into action by the ladybugs who parade by them shaking a chartreuse tail, but wanting only the thrill of the hunt, so they can overpower the buggy males. A certain misogyny might be showing, but this is such a cartoon that could have been made by Warner Bros. in the 1940s that you can’t help but sit back and root for the mean dames as they stomp on those pesky buggers.

Whether it’s Taylor’s rusty memories, zany dance animations or revisited classics, he’s a master who still has a lot to say in many dance languages.