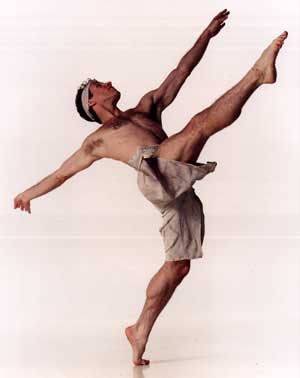 Paul Taylor is the best of contemporary American choreographers and his company among the finest groups of dancers anywhere. Nothing in the current San Francisco engagement has changed that opinion. Taylor, now 70, has just completed his 115th dance work. I haven&#146;t seen them all but I&#146;ll still wager there&#146;s not a bad one in the bunch.

The choreographer&#146;s 1999 &#147;Arabesque,&#148; set to various selections by Claude Debussy, opens program B. Turbaned, scantily clad dancers look like figures on an Egyptian frieze. The hands held bent at the wrist, as if carrying a tray, are almost as eloquent as the feet.This is a joyous, abstract piece, full of leaping and whirling. But there are a few dark moments. A male dancer comes up behind a woman and covers her eyes with his hands. After that, she seems to have lost her sight. She reaches for him but he eludes her and eventually she blindly staggers from the stage. He immediately begins dancing with another girl. A powerful metaphor and as close to story as you get in this dance. Wonderful Silvia Nevjinsky lends another somber note in her solo &#147;Syrinx.&#148; The tall, sinuous dancer writhes as if in torture to the sound of a flute, half-woman, half snake.

&#147;Funny Papers,&#148; premiered in 1994 and is dedicated to all those, like me, who turn in their newspaper to the funnies first. It showcases Taylor&#146;s whimsical side. Dressed in Santo Loquasto&#146;s black-and-white running suits, the company romps through Taylor&#146;s jazzy quirky choreography, giving it a kind of Broadway beat. In &#147;Alley-Oop,&#148; cavemen drag the women across the floor. Robert Kleinendorst is the boastful &#147;Popeye the Sailor Man,&#148; who, after all his bragging and muscle flexing, manages to take a punch or two from the women in the background. Patrick Corbin &#150; a Taylor dancer since 1989 &#150; paired with Richard Chen See, making a veritable vaudeville routine of &#147;I Like Bananas Because They Have No Bones.&#148; (What else could you do with a title like that?) Lisa Viola and Julie Tice were delightfully embarrassed in &#147;Itsy Bitsy Teenie Weenie Yellow Polka Dot Bikini.&#148; The genders bend mightily as Nevjinsky dances &#147;I Am Woman,&#148; backed by the men in the cast, and then Orion Duckstein does the same dance, backed by the women. The full cast participates in the goofy finale &#147;Does Your Chewing Gum Lose Its Flavour on the Bedpost Overnight?"

No laughs in &#147;Musical Offering,&#148; billed as a requiem, and performed to music of Bach. Although beautifully danced and appropriately programmed on the day after the composer&#146;s birthday, the overlong piece was a bit mind numbing with its repetition of robot-like movements. Perhaps an homage to those lost to the AIDS epidemic, it features a lovely duet for Corbin and Maureen Mansfield and ends with Mansfield moving against the prone bodies of the rest of the cast. There is a feeling of unutterable sadness to this piece that sends you out of the theater on a downer. It might have had a better position earlier in the program and we all could have bounced out into the night on the energy of &#147;Funny Papers.&#148;