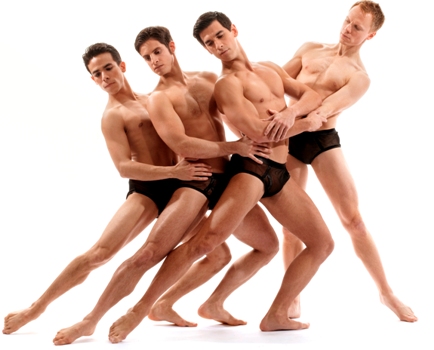 Program C contained three dances—”Brief Encounters” (2009), “Three Dubious Memories” (West Coast premiere) and “Brandenburgs” (1988)—that all center on relationships and, by default, the lack thereof. Mostly, they tell the overtold story of boys encountering girls, with a few vague and token innuendos between boys meeting boys, or girls interacting with girls. I dare not call them men and women, because of the simplistic and often Punch-and-Judy fashion in which these trite narratives are delivered.

“Brief Encounters” is a play on words, as boys and girls interact by chasing each other, getting jealous, throwing their arms up in frustration, or dragging each other across the stage Neanderthal-style. Their infantile encounters are brief, as are their black Calvin-Klein-esque skivvies and sports bras (designed by Santo Loquasto). What the underwear does do effectively is showcase the handsome, athletic physiques of the dancers—a trademark of the PTDC—as well as allude to some kind of contemporary adult sexuality and sensuality, which is never realized, although suggested in the opening tableau.

Neither is there anything sensual about the Claude Debussy score (“Le Coin des Enfants”), which at times is reminiscent of Copland’s “Rodeo”—more barn- or folk-dance in musicality. Nor do the Romanesque arches painted on the backdrop add much to this mix. Is Taylor trying to tell us something about a classical time, where the perfect bodies of laurel-crowned youth were chiseled into stone and bronze? If so, the choreography does little to support such a theme, as it also lacks both innocence and sensuality. Instead, it raises a bigger question about the relationships between the different aspects of this dance: Why they are encountering each other at all?

Unfortunately, the West Coast premiere of the second piece, “Three Dubious Memories,” does little to redeem this trajectory. It picks up where “Brief Encounters” left off, but without the guilty pleasure of seeing the dancers in their Calvins. With “Three Dubious Memories” (set to music by Peter Elyakim Taussig), there is more dubious hugging, punching, and waltzing parodies—along with gimmicky kicks to the groin, which result in more wincing than chuckling. Even worse is that the initial scenario is acted out three different times by its leads, as they each recount their version of the story—as if the initial brief encounter between the boy, girl, and boy was interesting to begin with. To this, add a corps of grey-clad dancers who play the part of a Greek chorus, contrasting with the principal dancers’ bright green, red, and blue costumes. The choristers flit about in shadowy juxtaposition with a lead “choirmaster,” creating—yet again—a dissatisfying and unclear relationship.

In this day and age, if a dance is going to rely on narrative in its choreography, then one can only hope that it be more interesting than the melodramatic style of silent film, where a punch in the belly is followed by a slap across the face. Or, where the complexities of a relationship are rendered in a one-dimensional operatic fashion: boy woos girl, rival boyfriend gets jealous and tries to win girl back, ad nauseam. For that matter, does a dancer really need to be dancing with a mirror to show she is vain? If, for some inexplicable reason, the narrative is that archaic and juvenile, the choreography needs to be spectacularly complex, inventive and intriguing. Otherwise, what is being called a modern dance ain’t so modern, and remains a hostage to its balletic and even operatic roots.

Fortunately, and by no small chance, “Brandenburgs” was picked as the final dance of the program. Clearly, they saved the best for last. Itis a delightful piece full of charm, sharp choreography, and movement, with cosmic innuendo in every gesture. Every abstract encounter between dancers is full of inexplicable story and relationship. There is intentionality to the choreography and pace that keeps every movement folding into the next, driven naturally by J.S. Bach’s Branderburg Concertos No. 6 and No. 3. It feels fresh, both on its own and in relationship to the other two dances—even though it was created more than 20 years earlier. It is sensual in its joy, and its lack of narrative makes it all the more titillating. Ironically, the male dancers look even more Marky-Mark-sexy in stylized velvet lederhosen than in their underwear, and the woman dance seductively and with great abandon, even though the choreography is more demanding.

Thank you, Johann Sebastian Bach, for saving the day!