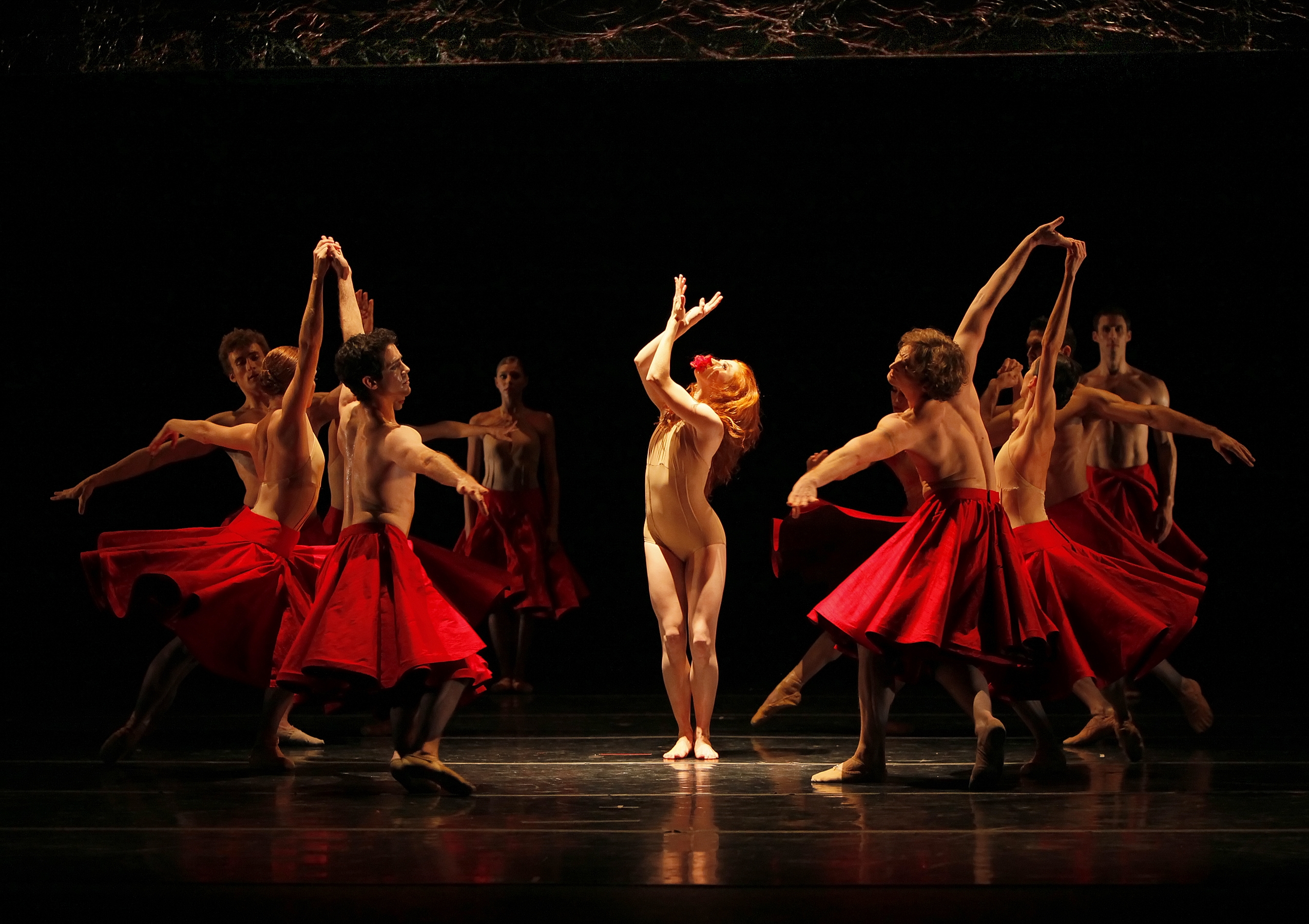 PA Ballet’s program of contemporary works shows the company’s expanding rep with various distinct styles represented. All challenging in different ways, but there were moments in the May 7 performance that freighted the choreographic scope.

George Balanchine’s “Square Dance,” set to baroque music by Vivaldi and Corelli, hasn’t held up well, despite fab solo sequences. When danced in a studied manner, it shows the choreographer at his most brittle. The ensemble passages uninventive, sort of Mr. B knock-offs of his own signatures. Reference points to Western square dance as a descendant of court dancing, downright goofy. Not helping in this performance were bumpy unison lines by the corps de ballet women and jagged jump sequences by the men.

Balanchine’s tangled central pas de deux, with phrases in torturous adagio, seems impossible to execute cleanly, even with the valiant efforts of Jermel Johnson and Amy Aldridge, who are both otherwise superb in their solos.

Jerome Robbins’ “Afternoon of a Faun” is a hugely likeable piece even with its built-in attempt to squash any homoeroticism. Nijinsky’s original “Faun” was a Paris scandale because it presented a masturbatory fantasy and objectified male beauty. Robbins resets “Faun” in a modern ballet studio exercise between a male and female dancer, not objects of desire, but sexualized vessels of dance. They study themselves in the mirror, detached, and then suddenly are intimate partners. Robbins layers in sexual ambiguity, and gay audiences, then and now, will see a completely different story than straight audiences. Tyler Galster and Julie Diana cast such an ethereal mystique as they personify the hidden characters in Robbins’ artifice, to brilliant effect.

Annabelle Lopez Ochoa’s “Requiem for a Rose,” scored to music by Franz Schubert, has lost some of its initial blush since its premiere last year, but proved an instant hit. The red skirts on the men and women dramatize a torrent of pirouettes, sweep-and-leap sequences, but the choreographic variations are spare. Cohesive transitions and tight execution still make this a hugely satisfying dance, but the ensemble was blurry in this performance. Moving it along were crisp duets with Riolama Lorenzo and Francis Veyette, followed up by James Ihde and Lauren Fadeley. Abigail Mentzer, in a fleshy bodytight and cloying rose in her mouth, hypnotized even as she dispatched Ochoa’s heavy-handed symbolism.

William Forsythe’s “In the Middle, Somewhat Elevated” is packed with dance chaos, and seeming anti-balletism, but it is built on a just as solid inverted structure. Thom Willems’ cold, industrial score helps conjure a harrowing dance world. Dancers circle a blue-lit arena and attack with fits of dance. The men are slashing through the air and the women in relentlessly skewered pointe runs, groups assemble in feverish configurations, soloists peel away on agitated tangents. Within Forsythe’s virtuosic passages, he encourages improv.

The cast of nine handled the demands ravenously, but the first half needed more air, which was all the more noticeable because the dancers really caught a wing in the back half and the piece flew. Leading Forsythe’s squirrelly edge with consistent clarity and wit were Zachary Hench, Arantxa Ochoa and Riolama Lorenzo.