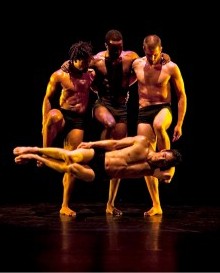 Pilobolus dancers in a scene from “Gnomen”
Photo by Joseph Mehling

Philly dance fans continue their love affair with that amorphous troupe Pilobolus Dance Theater. The company’s appearance at the Annenberg Center’s Dance Celebration series last week was part of a season-long dedication to Pilobolus co-founder Jonathan Wolken, who died in 2010. The company was performing several new works including “Hapless Hooligan” and “Redline,” with an extra show added to accommodate demand.

At the performance Saturday afternoon, dancer Jordan Kriston landed wrong on one of the intricate vaults and sustained a concussion. She finished the section, but immediately had to be taken to the hospital. No one could replace her in the new pieces, but Renee Jaworski, associate artistic director who danced with the company for many years, stepped in, or vaulted in, for a quickly arranged program of repertory favorites.

“Gnomen” (1997) is a morphing quartet for men, who roll onto stage interlocked into a body ball. Each dancer is separated and pounded into precarious shapes and positions by the three others. One man is held upside down (recalling an inverted cross on the gymnastics rings), or he is upended and drilled into the floor. Three dancers alternate, floating the fourth in lifts that look like slow moving high dives. One man is folded up like a pretzel and must scuttle, seemingly headless, across the floor. One man vaults on another man’s shoulder and it looks like a bipedal headed creature. After these tricks the group retreats into ritualized meditations. The balance tricks, contortions and vaults all have high degrees of difficulty. Just as astounding is the hypnotic serenity at the center of their clockwork precision.

“Transformation” is a new work in silhouette that has a young lass transformed rather brutally into a cute hound. It gets more Rorschachy scary. Some kids, including me, may have been horrified, but quickly recovered with “Walklyndon,” which has the troupe dressed in yellow body stockings and satin boxing trunks. They power-walk repeatedly across the stage colliding into each other ala cartoon slapstick. They flip, drop, smack, dive and walk over each other and have all sorts of stoogy fun. All us kids in the audience (at least on the inside) were squealing with delight.

“Pseudopodia” is a solo, danced with peerless contortion strength by Jun Kuribayashi in a red leotard, a tumbler in perpetual motion who just as suddenly locked into yogic freezes—as kinetic as it is meditative. That is also the quality in “Shizen,” a duet for a man and a woman, all but nude, moving in isometric austerity separately until they are fused. They seem like universal forces of nature, literally and figuratively, and when they are finally coupled, the sensuality is humanoid.

The end piece “Untitled.” an early Pilobolus work, seems very Tim Burton-macabre but predates him. Two women in early 20-century dresses are sudden 10 feet tall via some very hairy legs sending them aloft. Up and down like a discarded Wonderland fantasy. They eventually give birth, are courted by some gentlemen and play hide and seek games. “Untitled” looks particularly dated and goes on much too long.

Easily forgiven considering the trove of pure movement joys to appreciate. This performance rep sampler is a great reminder of the unique vision of the fearless Jonathan Wolken.

(20607)
$6.49 (as of January 25, 2021 - More infoProduct prices and availability are accurate as of the date/time indicated and are subject to change. Any price and availability information displayed on [relevant Amazon Site(s), as applicable] at the time of purchase will apply to the purchase of this product.)