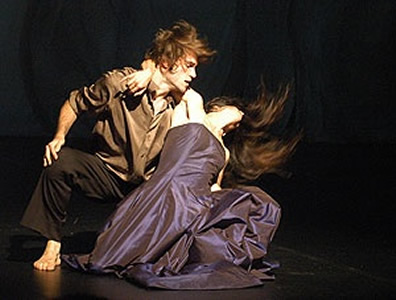 The great German choreographer Pina Bausch passed away on June 29 within a brutally short week of a cancer diagnosis, at 68 years of age. It was a terrible shock to the world of dance and performance—the end of an era and the sudden, cold beginning of another without her.  Her pieces, performed by Tanztheater Wuppertal Pina Bausch, a company of characters more intriguing than  Dickens’, were life magnified—passionate, dirty, beautiful, violent, and crazy. A lot of their actions seemed more like rituals of torture than dance. But it was definitely theater, set to expansive musical collages, in various Peter Pabst arrangements of dirt and water, among a fallen wall of concrete blocks which wewitnessed crashing down, a field of carnations, a human-scaled terrarium.

The collapsing wall in Palermo was certainly the most terrifying mechanical event I’ve witnessed in a theater. But more terrifying were the things Pina’s dancers did to one another or themselves, as people do in real life. Whatever you can think of to inflict pain or humiliation on another human, she did. These tasks, in which the women were usually the victims, often involved icons of femininity—long hair, lipstick, the donning and shedding of evening gowns, and the pervasive stilettos, which the mere idea of wearing was enough to make my calves cramp. She also trafficked generously in the four elements (well, fire being cigarettes), and in fruit, knives, chairs, and other banal objects. Women in silk warred for power with men in suits, each gender wielding its considerable charms and brute  strength. But the bolt of pure romance that shot through her work explored the opposite pole. The men, sometimes acting as mere furniture, carried the women aloft like angels; the women curled themselves around men like wisps of smoke, or cooed in a group around one lucky  guy.

In the mid-90s, Pina’s work began to soften for real, beyond the periodic seduction. More floral and less grave (as in burial) imagery. Water, but in buckets to wash with,  or to shower from the rafters or well up mildly in a pond and recede. Hair, now brushed; satin, less to escape out of than cover up with. Always heels and suits. A good deal more movement—solos created for each individual  dancer, even for the liquid Pina herself on rare anticipated occasion. It was like she’d exorcised most of the  demons that drove her til she was five plus decades in, and she’d fallen in love all over again and needed to remind the world what it felt like. Elysium after the apocalypse.

Soundtracks grew in eclecticism and source. Clamored for to do commissions by cities/countries around the planet, her later oeuvre grew by a series of travelogues, cultural scrapbooks of numerous destinations far from Wuppertal. And even more dance than ever, in her lyrical, unending pages of cursive, forcefully performed by the dancers we’d come to know less as athletes, more as personalities. And each new show added new characters to an already indelible pantheon, performers who burrowed even deeper into our psyches with each visit.

I’ve watched her work for 25 years at BAM, her sole New York venue. I work at BAM, and a big reason is because Pina’s work had a seismic affect on me when I first saw it.  It pushed human emotion to unexpected extremes, frighteningly dark as well as gloriously ecstatic. When her  company came to town, there was always a buzz in the building, from hearing company class being conducted in  the mornings, to the feverish lines of people in the Opera  House lobby waiting to buy tickets to her sold-out shows.
In person—pale, slight, and soft-spoken—she seemed less  flesh and bones than luminous spirit, humility, and  politesse, which is how she will be remembered, alongside her wildly human body of work.