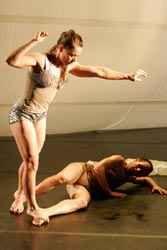 If you are still in the doldrums about Pluto being voted out of the galaxy, have I got a new planet for you. Brian Brooks Moving Company’s performance of again again conjures an otherworldly place through both clever movement choices and mysterious visuals.

Inflatable white peninsulas break up the space, creating an animated glacial-scape of unknown location. Starting on the wall, this tribe appears trapped there; perhaps the whole dance is an escape ritual on a repeat loop. The orbs inflate and deflate, dancers ascend and descend; the whole dance breathes with curious sense of redundancy. Based on the Herculean tasks required of the dancers, the faint of flesh (and bone) need not apply. It’s a dim picture, quite ambitiously danced by Brooks, Weena Pauly, Douglas Duran, Alexander Gish, and Jo-anne Lee.

Brooks and his mighty-cored troupe have their way with the laws of gravity and physics. (Brooks and Pauly are both STREB veterans.) Mid-air stops, sidewise wall tumbling and other amazing tricks are just some of the visual treats embedded in Brooks eerie dance. Clad in futuristic athletic wear with a band of silver sequins on their bottoms, this well-toned bunch looked suitability trained for demands of captivity.

Brooks comes up with some wildly novel ways to move. It’s as if Brooks challenged himself not to use any movement or quality that existed thus far. Duran and Gish play with dissolving form in arresting duet. There’s a precarious quality here, as Brooks investigates the making and unmaking of form. Another passage sets the dancers scampering over each other’s backs like ants, followed by an elongated crawl propelled by a robotic joint collapsing. It’s both exciting and disturbing. Brooks displays marvelous movement invention throughout as the spirit of deconstruction drives the work.

Towards the end, a giant oval orb inflates, dominating most of the available space. A tender duet between Brooks and Pauly follow. Brooks offers his own body as a safe landing zone. Carefully, she steps on his hands and back to cautiously move across the space. The imposing environment rules and the dancers tread lightly as if not to disturb the imposing white giant.

Despite a strangely-concocted world, Brooks never leaves the human perspective. Bodies, pushed to the limits, are still bodies. I left reminded of the famous words of the surrealist poet Paul Eluard. ‘There is another world, and it is this one.’