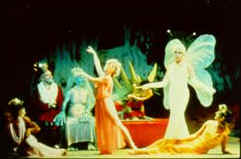 It&#146;s not easy being green, as Kermit the Frog will tell you and Platee, the protagonist of Jean-Philippe Rameau&#146;s 18th Century comic opera learns it the hard way. An unattractive nymph, who resembles something you might have dissected in high school Biology class, she rules over a swamp peopled by creepy crawly things and has developed a very high opinion of her own charms. Courted by a celestial lover as a joke, she is unceremoniously dumped to the delight of everyone &#150; including the audience. So much for vanity.

Platee originally was penned for a court wedding at Versailles (coincidentally, the bride also was rather ugly but nobody seemed to make the connection and Rameau went on to fame and fortune). The piece might have remained a curious cultural footnote for aficionados of the Baroque had it not been picked up by a genius of today. Choreographer extraordinaire Mark Morris, who delights in setting early music (e.g. Handel&#146;s Dido and Aeneas) in his own quirky, tongue-in-cheek style, turned Platee into a ballet-opera and the result is an entertainment unequaled in either Rameau&#146;s time or our own.

Platee, which made its U.S. debut in 1998 in Berkeley, returns to that venue this week, alternating with a mixed bill of dance. With Nicholas McGegan and the Philharmonia Baroque in the pit, the UC Chamber Chorus in the background anda gaggle of soloists and dancers on the stage, it is an ambitious undertaking and well worth the trouble. Not the least of the elements is the costuming, by famed ex-fashion designer Isaac Mizrachi who dresses satyrs in leather thongs and tattoos and Jupiter as Old King Cole. He creates impossibly long snakes, too. And that&#146;s just for starters.

The story is ridiculous &#150; and one that might engender a Berkeley feminist protest if it wasn&#146;t so much fun. The aforementioned nymph, Platee, is made the butt of a cruel joke cooked up by the god Mercury to cure the Queen of the gods of her jealousy. Jupiter, King of the gods, has a notorious roving eye and his possessive wife is making his life pure hell. Mercury, with the help of Momus, the spirit of sarcasm, and Citheron, a mortal, sets Platee up with Jupiter and a mock wedding is held, to which Junon, the wife, is invited on the sly. She confronts her cheating husband but, when she lifts the bride&#146;s veil, the tables are turned. The joke may be on Junon but, after the reconciled Olympians ascend back up to heaven, it is Platee who is the center of ridicule.

Well sung and acted by tenor Jean-Paul Fouchecourt, who has quite a respectable operatic resume and specializes in the Baroque repertoire, Platee would be a pitiable creature if she was not so disgustingly vain. Jupiter (Bernard Deletre) might be viewed as a tyrant if he was not so casually pompous (he carries a neon thunderbolt which can be switched on and off). And Mercury might be seen as an evil troublemaker if he did not come up and down from Olympus in a golden basket, careful to fasten and unfasten his seat belt every time. As it is, they are all too funny for serious consideration.

The Prologue is set in a bar, where gods and hookers, satyrs and sailors mix and drink and drink and drink. Bacchus, god of wine, is the bartender. As the Budweiser and Michelob signs shine in the background, there are some nifty dances as the plot is hatched and the praises of Bacchus sung by a hideously inebriated Thespis, inventor of comedy (Philip Salmon). Amour, the god of love is there as well, with an arrow sticking out of both sides of her head like something out of the Marx Brothers (or Steve Martin).

But it is in Act One, in the swamp, that the whole thing really takes off. Barefoot insects in bright tie-dyed leotards and goofy spiked hair hop and strut and creep and crawl. Beautiful birds flutter feather-fanned arms. Snakes slither and turtles poke along. The wind, personified by four dancers in silver leotards and floating gray veils, howls (with a backstage wind machine making the sound, much as in Rameau&#146;s day). Rain showers up from an onstage fountain and Iris, the rainbow goddess, struts across the stage in head-to-toe silver paillettes &#150; with sunglasses to keep off her own glare. Morris&#146; inventive choreography expresses each creature and even the singers manage to integrate their moves with the dance.

Act Two, enlivened by the lovely Amy Burton as La Folie (Madness) tends to get a little long as the creatures and satyrs and demi-gods engage in endless processions and hymns of praise to the preening Platee, who actually believes the admiration is for real. But that&#146;s the way Rameau wrote it and Morris spices it up with copulating turtles in the background and the rape of the virtuous Three Graces (one of whom is a guy in drag, a typical Morris touch) by the satyrs.

All nonsense, all spectacle, all in good fun. Kind of makes you want to go out and kiss a frog, just to see what will happen.