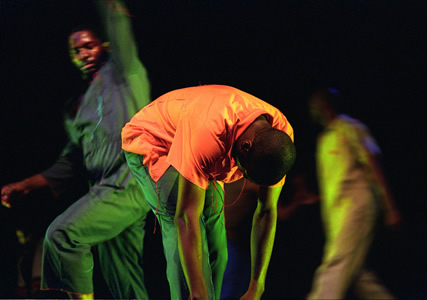 Richard Move created “Martha @” in 1996, as a kind of cabaret act/alt-dance event. Seen in a customized/Californiated version for a one-night stand in San Francisco, it is an interesting concoction, part dance history, part spoof, part dance homage, part theatre piece. Move comes out in familiar Martha Graham drag after a campy film montage (by famed videographer Charles Atlas) sets a tone of lightness and comedy that Graham herself would have abhorred. But that’s the fun of it. Move obviously adores the high priestess of modern dance about whom he has spent so many years imitating, and yet he’s perfectly comfortable lampooning her. It is a tricky balance that he pulls off well, even if the evening never builds to any particularly cohesive point of departure.

A whole generation of dancers have come and gone since Graham died in 1991, so the legacy of this American genius is well-served by Move, who uses the stage time to venerate the legend much more than to eviscerate (although she deserves that too). The speeches and film clips incorporated during the evening are taken from the source, and the spirit of Move’s mini-dances, “Frontier” and “Lamentation” also ring true, although Move is no longer the dancer he must have been in his day (when he was dancing with Merce Cunningham, Yvonne Rainer and Karole Armitage). His cohort, the genuine Graham company dancer Katherine Crockett offers ample evidence of the twisted, contorted beauty of the Graham technique, which, although it has fallen way out of style, may be due for a revival, since no other form of dance offers an equivalent ab workout. Those deep contractions are killers!

There may seem to be no rhyme or reason to Move’s choice of guest artists (although, as MC, she/he does try to find some kind of introductory connection) but the San Francisco dancers on display offered a smorgasbord of what’s happening in dance now, at least in the Bay Area. Matthew Holand and Levi Toney performed an excerpt from a Margaret Jenkins piece, “A Slipping Glimpse” which was a rough and tumble, guy-on-guy affair, something Graham the female-centric choreographer would also have avoided. Marc Bamuthi Joseph offered spoken word performance excerpts that were as powerfully personal as they were convincingly performed. Muriel Maffre, one of the stars of the San Francisco Ballet, offered the brief but unforgettable “Dying Swan” solo.