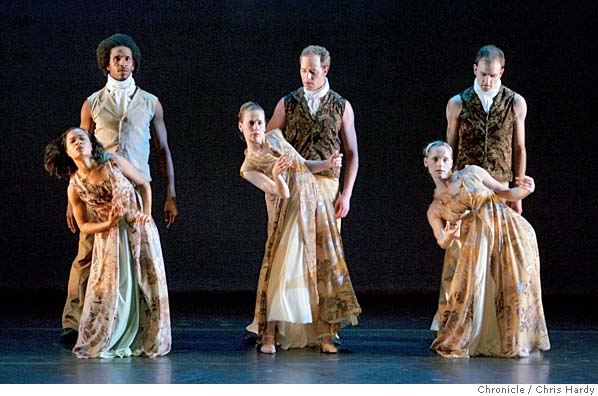 Choreographer Robert Moses has undertaken a complex project titled
“The Cinderella Principle,” a world premiere, a collaboration with
projections by Bill Morrison and text by Anne Galjour. Although the
original texts of the Cinderella story involve a child within a family
though abused by her stepmother and her step-sisters, Moses’ work
takes as its thematic material the efforts of couples, gay and
straight, to conceive and/or adopt children. It is an important topic,
well known in the San Francisco Bay Area. It is realized in the text,
the set design by Erick Flatmor, in the wire figures by the dancers,
but not thoroughly amplified by Moses’ choreographic material Perhaps,
in Cinderella fashion, the children are rescued; perhaps , though not
so, they live happily ever after.

Costumed in white by Mary Domenico,the full company of eleven dancers
enter the stage with a slow stylized walk which, along with tight
interactions, duets and small groups, acts as basic movement for the
piece. Sometimes the women dancers walk on groups of the men: often
they are lifted and placed close among others. Throughout the work,
these moves provide a sense of intimacy. The text is ‘illustrated’ by
a mother figure, Katherine Wells, partnered in the first half by
Brenda Berthel, and later by Nicholas Korkos who lead and protect a
“daughter, “played by Natasha Adorlee Johnson. The partnering reveals
various tensions: consolation, anger, care, resolution.
Other company members provide the movement montage for the dramatic
action. Todd Reynolds in collaboration with Kid Beyond played the
deafening sound score. Despite Moses’ note that, “the subject is close
to my heart,” The Cinderella Principle” wears down and toward the end,
dissolves into repetitive movement and that slow walk.

Two dances preceded “Cinderella.” They were “Towards September” (2009)
and “Hush”(2008). The most interesting moments in “Towards September”
were in the opening when a group of five, and then six dancers stood
close and exchanged places. What followed was Moses’ “signature”
material: gestures within the body space and to another, wrapped
contact and balances in duets and trios and always, lifts, lifts and
more lifts, often followed by split rolls to the floor.  This is all
very acrobatic and admirable in the dancers’ skill, but its expressive
nature is unclear. “Hush” gave us a change of pace. It is a slow duet
between Wells and Barthel to unidentified ‘romantic’ music of Ralph
Von Williams (note: it should be Ralph Vaughn Williams). The two
dancers are very skilled, projecting attraction, closeness yet
independence.The choreographic vocabulary was essentially the same –
with some added swings.