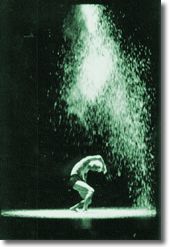 Japanese modern dance has been equated for many years with the movement aesthetic called butoh, an outgrowth of the devastation of World War II. It is a bare-bones, stark form of dance–more like theater, really, but probably called "dance" because it involves no dialogue. It is best known in the West through the work of the couple Eiko and Koma, and the company Sankai Juku. Dance evolution in Japan has resulted in Rosy CO, a group formed by choreographer Kota Yamazaki in 1995. Yamazaki’s roots are in butoh, but his company employs dancers from other dance backgrounds as he is interested in exploring "new forms of human relationships and community."

Chinoise Flower consists of two segments. The first part, one-half hour in length, began in a butoh vein. Six dancers in white were arranged around the stage as the sound of a steady beep was eventually augmented by static. A woman, clearly ballet trained, begins stretches, and then her movements are duplicated by a man at another part of the stage. In the middle of the stage, a prone figure begins to move imperceptibly. Then towards the end of the section, a man enters and dances like a whirling dervish, in contrast to the slower controlled movements of the other dancers.

In the second segment, the dance changed character. The sound accompaniment, which began almost as austerely as the first part, gradually went from electrical sounds, to the sound of an amplified beating heart, and then gave way to light, Eurotrash dance music which had an overlay of words spoken in English. The woman ballet dancer appeared wearing toe shoes, except that she spent most of the time in a crouched position in front of a fuchsia screen. Only towards the end did she begin to move, revealing that despite her physical strength (she had demonstrated great movement control in the first part) her ballet training was insufficient and her pointe technique was not secure.

The dance movement was speedy. Arm and hand movements drew attention to themselves. There was a strong debt to Twyla Tharp in the quirky motions, particularly those by the company’s director, who danced the central role. There were changes of costume, from white to green to black and back to white again. There seemed to be some kind of message. But what was it?

There is a central dilemma facing a westerner who is looking at a foreign aesthetic. Japanese symbolism can be difficult to discern for untrained eyes and minds. Yamazaki’s program notes (awkwardly translated) outlined his intentions, and yet even with them as a guide the piece was puzzling. The experience was like that of an American eating a Japanese chocolate candy for the first time. The wrapping is interesting, intriguingly designed. The use of English naming the candy is off-kilter: words don’t really mean what you know them to mean. They have relinquished their English meaning and taken on a new one that is unclear, askew. And then you bite into the chocolate. It looks like chocolate. It is chocolate. And yet it isn’t. The flavor of Japanese chocolate is sui generis, something all its own, not at all what we know as chocolate.

Was it all high flown pretension? Certainly Yamazaki’s earnest program notes led one to think that there was a lot of gobbledygook in the thinking–but maybe this was the fault of the translation. Does this emperor have no clothes? His abilities at this point are not equal to his stated aim to "discover something that could change the times."