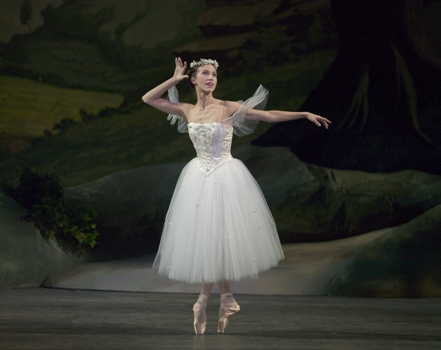 The Royal Danish Ballet: ‘La Sylphide’ and ‘The Lesson’

It has been half a century since the Royal Danish Ballet has been in Northern California. Of course, that’s just a tick of the clock to this venerable company, which was founded in 1748, making it the third oldest in the world. And the dancing Danes have brought both something old and something new to their current U.S. tour.

August Bournonville is a name synonymous with the Royal Danish Ballet and his 1836 “La Sylphide” the most famed among his many works for the company that bears his stamp to this day. It was the first European Romantic ballet to grab audience imaginations (the original was created a couple of years earlier in Paris for the great Marie Taglioni, she of the three-quarter length tutu fame) and has remained in the Danish repertoire ever since. Elements of the story line would turn up later in more popular works like “Swan Lake” and “Giselle,” but Bournonville got there first and his version is a sheer delight. With a sprightly, eminently danceable score by Herman Severin Løvenskiold, ably delivered by the Berkeley Symphony under Henrik Vagn Christensen, the current production is by company director Nikolaj Hübbe and Anne Marie Vessel Schlüter.

Of course we all know what happens when a mortal man falls in love with an other-worldly woman (or, in the case of “Rusalka” and “The Little Mermaid,” vice-versa). Such mixing and matching never quite works out and there is bound to be heartbreak or death—sometimes both—at the end. This time around the scene is Scotland, giving the composer and choreographer lots of leeway for folk melodies and corps de ballet dancing in the first act. The second act is rather like “Giselle,” with the hapless hero chasing his flitting, flying sylph in a mysterious forest, this one not only haunted by white-clad nixies but a coven of spooky witches as well.

James (Mads Blangstrup) is asleep by the fire on his wedding day when he is visited by the sylph of the title, a being capable of flying in through the window or disappearing up the fireplace at will. On opening night she was danced by light-as-air guest artist Caroline Cavallo. James awakens and falls madly in love, but when Effy (Camilla Ruelykke Holst), his betrothed, appears, he becomes confused, wanting first one and then the other (and they say women are fickle). The plot is further complicated by Madge, a witch (the very expressive Lis Jeppesen) who is out to get James for insulting her and the farmer Gurn (Nicolai Hansen) who wants to get Effy for himself, any way he can.

A Bournonville trademark is mime—hand over the heart to indicate love, circle around the face to mean beauty, hand to the brow showing sorrow—and this company is adept at his technique. As for James, he may have lousy taste in women but his elevation is spectacular. Although there is a pas de deux for our hero and the sylph, he does not exactly partner her in the classical sense. That’s because she never stops moving long enough for him to catch her. This can be a little frustrating, not only for James but for the audience. Only at the end, when she dies in his arms, do they really connect physically. I could have done without the apotheosis, where the sylph is borne aloft, presumably to sprite-heaven, by her sisters as James lies despairing on the ground, but that was the style in the old days. Aside from that, “La Sylphide” was a lovely Highland Fling.

The program opened with Flemming Flindt’s 1964 “The Lesson,” a terrific riff on the relationship between ballet master and student that pre-dated “The Black Swan” by more than 50 years. Thomas Lund was fabulous as the sometimes shy, ultimately lethal dance teacher and Ida Praetorius danced the vain, self-absorbed student who is rudely initiated into a cult of pain. The prim pianist, who could be described as an accomplice to the crime, was Maria Bernholdt. This is one of the more interesting—if macabre—ballets on the books, and it has a great part for the male dancer, who goes from wimpy and self-effacing to chest-beating macho and beyond. Lund danced with an increasingly savage energy to his leaps and turns until the whole lesson culminated in a surprise ending.

By the time you read this, “The Lesson” will have ended and “La Sylphide” will have flown away to New York, but more Bournonville in the form of Hans Beck’s “Bournonville Variations” and several contemporary works by Scandinavian choreographers are scheduled for the weekend. Might be a good idea to check out the Royal Danish Ballet in Berkeley just in case it doesn’t come back for another 50 years.