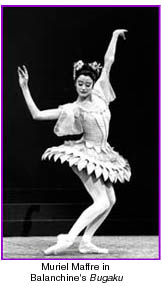 If all ballet programs were as varied, exciting and superbly performed as the fourth in San Francisco Ballet&#146;s current season, ballet might be as popular as football.

Not that this troupe can complain about being based in a city that supports a full season of dance that runs from January through May. Nevertheless, the program that opened at the War Memorial Opera House Tuesday, Helgi Tomasson&#146;s "Beads of Memory," Roland Petit&#146;s Pas de Deux (from Proust), Balanchine&#146;s "Bugaku" and Lila York&#146;s "Celts" could be judged exceptional by any balletomane&#146;s standards.

Last things first. "Celts," the final number on the program, was worth waiting for. Michael Flatley, pack your bags. This was the best of "Riverdance" and much, much more. Set to music by the Chieftains and others, York&#146;s patterns were always interesting, whether in an achingly beautiful pas de deux for Stephen Legate and Joanna Berman or an athletic sequence for bare-chested warriors accompanied by drums. And, for sheer exuberance, you can&#146;t beat the full-cast finale. It may be a little early for St. Patrick&#146;s Day but this was a real Irish love-fest and that&#146;s no blarney.

In addition to Berman and Legate, there was some astonishing dancing from Guennadi Nedviguine and David Palmer that drew bravos from the audience. "Celts" was originally done in 1996 for the Boston Ballet. Shure and it&#146;s a welcome addition to the San Francisco repertoire.

Back to the beginning: Tomasson&#146;s 1985 "Beads of Memory," an unabashed homage to his late mentor, George Balanchine, had some of the nicest choreography I&#146;ve ever seen by the former New York City Ballet danseur, now artistic director of San Francisco Ballet. Set to Tchaikovsky&#146;s lovely Rococo Variations (and high marks to the cello soloist), it is the kind of plotless, neo-classical piece that was the hallmark of Balanchine&#146;s oeuvre.

Katita Waldo was the epitome of the Balanchine ballerina, rail thin, blonde, a little aloof. Her partner, Roman Rykine, showed amazing elevation in his leaps. Together, they were wonderful, their pas de deux to the Adagio a beautiful example of the Balanchine style.

"East is East and West is West …" but the twain meet most amusingly in the first half of this dance, with the women painted like little Japanese dolls from the neck up. Then the eye travels down to tutus (albeit shaped like fans) and toe shoes. Everybody is very formal and polite with little steps and lots of bowing. Then the men come on like the Seven Samurai in a wonderful display of machismo. But it is the second half of "Bugako" that shows Balanchine&#146;s genius at its height. Returning in scanty, filmy white garb, the dancers enact a kind of wedding night ritual that begins in formal gestures and ends in an erotic pas de deux for the principals (Muriel Maffre and Cyril Pierre). It is surpassingly sexy and beautiful; then the attendants return and everybody reverts to their polite, public selves. It is a wonderful statement about a culture, an elegant work of art, and Balanchine at his best.

The program was rounded out by a brief piece from another choreographic master, the Frenchman Roland Petit. Slotted in between "Beads of Memory" and "Bugaku," the pas de deux from "Proust" must have been programmed as an afterthought as it was not listed in the large program, only in a handout. Afterthought or not, it was a happy one. Premiered in Monaco in 1974, the dance is excerpted from a longer work, based on Marcel Proust&#146;s famed "A la Recherche du Temps Perdu." It received its San Francisco premiere this January – a long time in coming but never too late for a good thing.

Set to music of Saint-Saens, it opens on a female dancer lying prone on a bed of white veils. Whether she is sleeping or dead is anyone&#146;s guess but, having been forced to read Proust&#146;s mammoth opus in college, I would guess dead. Her partner, obviously yearning, revives her, although her movements continue to be those of a sleepwalker. They dance for a brief time and then she sinks down again upon the veils. Lucia Lacarra and Yuri Possokhov made an elegant duo in this little exercise in necrophilia and Petit&#146;s choreography stood in sharp contrast to the other dances on the program.

There is an utterly stunning set effect at the end that actually takes the breath away. Like the end of a thriller, it should not be given away. Hopefully, this lovely work will remain in the repertoire for many years to come and dance lovers can experience it for themselves.