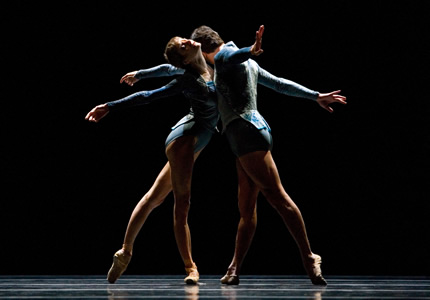 Matjash Mrozewski is a young Canadian choreographer tapped by Helgi Tomasson to make a new work for San Francisco. “Concordia” is set to the music of Matthew Hindson, (also young) who is Australian. The piece explores the confluence of weird, experimental stuff vs. dancing that is razor-honed, in-the-bones, school-drilled classical. Two couples represent the contrasting styles, yet each pair also gets to take on occasional characteristics of the other, making choreographic references, little wrenches thrown into their main stylistic thing. The music is twisted in the same way. Hindson’s pieces, “The Rave and the Nightingale,” and “Technologic I, ” go from jarring to austere, from sweet and melodic to jokey and edgy.

This choreography is not schizophrenic, it sums up quite well the current state of things in ballet. In San Franscisco, for example, most of the excitement, dancewise, seems to be generated by the newest works in the repertoire, which are mostly edgy (unless you count Tomasson’s up-and-down but numerous mainly conservative compositional offerings). The San Francisco Ballet identity and reputation, however, remains as a Western branch off the Balanchine and New York City Ballet family tree. That’s where early director Lew Christenson came from, and that’s where Tomasson grew up. Appropriately wrapping up Program 7 was Balanchine’s, “Symphony in C” . White tutu’s ended the day.

“Concordia” looks modern, with a darkened stage cut into with long diagonals of side lighting. The costumes for the two women, (Muriel Maffre and Kristin Long on opening night) offer androgeny for Maffre (who also wears her hair chopped off, pixie length) and a tu-tu for Long. Long also gets the blonde cavalier, Gennadi Nedvigin, who duly partners her attentively. Maffre’s guy, Pierre-Francois Vilanoba, is not only less attentive, he can be downright abusive.

Choreographers sometimes simply use the chorus (in this case four secondary dancers) to wipe the narrative slate clean, take a breath, bust out of thematic responsibilities and to use space and time in the other capacity, for good-old dancing. Joanna Mednick, Courtney Wright, Jaime Garcia Castilla and James Sofranko seem to be having more fun than the new/old couples. Their dance is about change and release.

I think Tomasson is intending a message to the old guard in his wealthy San Francisco audience (who moan and roll eyes at each other at intermission afer one of the new "weird" ballets). Tomasson’s message is this: There is a happy medium. There are young choreographers out there who still want to do ‘pretty’. Even better, Mrozewski does intelligent ‘pretty’ with an edge. He may not be as brilliant as Christopher Wheeldon or William Forsythe, but he’s just starting out. Mrozewski makes dances that work just right in San Francisco.