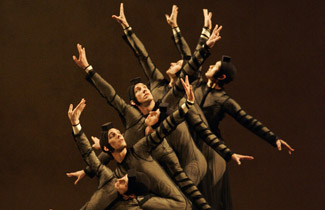 An all-Jerome Robbins evening at the San Francisco Ballet offered West Coast audiences a variety-pack of ballet choreography from the man perhaps best known for his highly unballetic Broadway and Hollywood hit, West Side Story. Robbins, who died in 1998, was the American counterweight to the Russian genius George Balanchine for many years in his role as Associate Artistic Director of the New York City Ballet. While Balanchine may have overshadowed Robbins in pure technical invention, it was Robbins who was the more versatile. The ballets on display in San Francisco handily demonstrated that.

"Afternoon of a Faun" (1953), was a re-do of a notorious 1912 Nijinsky ballet, (the original scandalized audiences with episodes of autoeroticism) and presents a clever re-telling of the same themes. In a rehearsal studio, two dancers stretch and rehearse. Sexual overtones still exist, but the main lure for these young dancers is not each other, but their own images in the mirror. Indeed, the mirror plays as large a role in the dance as that of either dancer. Yuan Yuan Tan, the extremely leggy prima ballerina from the company, worked her hair and was clearly comfortable performing for herself, but it was the male dancer, Ruben Martin, who rolled on the ground as if there were real dirt down there, his cat-like floor stretches weren&#146;t simply "steps." They suggested the legendary sensuality of the original Faun, Nijinsky.

"Other Dances" (a San Francisco ballet premiere, as was the previous piece) is a deceptively simple pas de deux to Chopin waltzes and mazurkas (played onstage by Michael McGraw). Originally choreographed as a 1976 gala vehicle for Mikhail Baryshinikov and Natalia Makarova, not long after their defections from the Soviet Union, the dance is a star-turn, Robbins-style.

One begins to understand the combination of earthiness, musicality and humor that differentiated Robbins&#146; work from the more austere dances of Balanchine. "Other Dances" offered delightful moments for the dancers, Tina LeBlanc and Joan Boada, although they looked new in the work still&#151;unable to attack the quick, fiendishly difficult stomps, turns and partnering with precision while also looking relaxed. There was still too much of the classical tension to their bodies–a little more relaxation might have fit Robbin&#146;s intention. It certainly would have fit the music better.

"Dybbuk" and "Glass Pieces" were bigger group pieces, the former a mystical, meandering story ballet, and the later, a very 1980&#146;s-looking work for masses of rushing commuters and a few soloists in Olivia Newton John headbands. "Dybbuk" is something of a Robbins mystery&#151;a work with bombastic music by Leonard Bernstein that the choreographer reportedly never liked, and movement that is dreamy and softer-edged. It&#146;s as if Robbins refused to tell the story Bernstein&#146;s way.

"Glass Pieces" fills the stage with color and pedestrian movement and stripped-down, no-frills design. Sections for men were strong in both of these works.