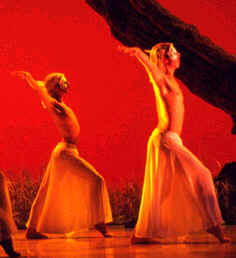 The way a choreographer responds to music often helps an audience visualize aspects of the music heard only by trained ears. The latest program of the San Francisco Ballet&#146;s 2003 season is an object lesson in the way movement reflects music. Tchaikovsky&#146;s unfinished third piano concerto has a single movement, marked allegro brillante, which is the title of the George Balanchine ballet that opened the program. Balanchine is the undisputed master of musicality among 20th century choreographers. This twelve minute ballet is a beautiful example of his use of classical forms to illustrate the composer&#146;s technique.

It is a joyous work for a central couple and a corps of four subsidiary couples. Balanchine achieves great eloquence with simplicity, building tension through the way he marshals his forces.The corps is dancing as the curtain rises, and the momentum of the piece builds as inexorably as the music.The couples perform in cannon, each by turn repeating the movement stated by the first couple.Then the central couple enters.They dance together and then the woman has the stage to herself as the piano has an extended solo section.The other dancers re-enter as the orchestra returns. When the music reaches its climax, so does the dance.The dancing stops with a finality that matches the music&#146;s conclusion.

The central couple was danced by Julie Diana and Sergio Torrado.She is usually a cold, reserved dancer, but in this instance she seemed inspired. Her solo approached the level of passion in the music.Perhaps it was the partnership with Torrado that made the difference, as he brought a welcome vigor as well as elegance to the performance.The corps performed cleanly.If only conductor Andrew Mogrelia had achieved a better balance between the orchestra and the piano playing of Roy Bogas.

Second on the program was Helgi Tomasson&#146;s newest ballet, Concerto Grosso, set to music of Francesco Geminiani after Corelli. It is a brilliant exercise for five men, who, after a stately opening in which the musical theme is heard, proceed to a series of individual variations. That is what this concerto is: a theme and variations. Each of the men is given a distinctive movement vocabulary. At the end, when the music ties everything together, all the men are on stage with each performing some of his own variation.

The cast was uniformly excellent, demonstrating the high standards of the company&#146;s men today. Pascal Molat, a dynamo in red, had the central role, filled with rapid and difficult beats.Jonathan Mangosing showed smooth control in his legato phrasing of the slow variation.Hansuke Yamamoto was sharp in his precision. Rory Hohenstein and James Sofranko each danced with distinction and performed a dance together that was warmly applauded. In fact, applause erupted repeatedly during this welcome addition to the company&#146;s repertoire.

Christopher Wheeldon, whose roots are with the British Royal Ballet and its tradition of narrative dance, has taken an interest is the dense music of Gyorgi Ligeti. Last season SFB gave the premiere of his Continuum, and this season is presenting Polyphonia, which was first performed by the New York City Ballet in 2001, where Wheeldon serves as resident choreographer. Both are abstract works set to the piano music of Ligeti. Wheeldon has now added a third Ligeti ballet (Morphoses) which entered the NYCB repertoire last season.

Polyphonia is a spare dance for four couples dressed in dark purple leotards. The ballet opens with all four couples, followed by a pas de deux, then a waltz that begins with one couple who are joined by two more. The three women remain on stage for a dance, then two men dance (in cannon alternating with unison dancing), and so forth. Wheeldon seems to be interested more in shapes than in mood.The ballet is a little antiseptic, and overlong.However he achieves some fascinating interplay between his movement and the music.Muriel Maffre and Damian Smith are given two pas de deux in which her long legs become the object of attention.She almost becomes disembodied in the second of the two, as she is held aloft most of the time going through contortions where her legs rivet your attention. All the couples danced with concentration and precision. Pianist Michael McGraw made the music flow.

Principal dancer Yuri Possokhov, whose first ballet (the surreal Magrittomania) was a big hit, was asked to create another work.Titled Damned and based on the story of Medea, it was first presented in 2002 and is being revived this season. He selected the music of Ravel (the Pavane for a Dead Princess and the piano Concerto in D Major for the left hand) to tell the story of Medea and her revenge on the faithless Jason. Medea has their two young sons deliver a poisoned cloak to Jason&#146;s lover and then kills the two boys as additional retribution. The story is told quickly and economically.The ballet begins with a passionate pas de deux for Jason and his lover, set to the orchestrated version of the Pavane.There is a disconnect between the emotion expressed in the dance and the elegiac quality of the music.

Then Medea takes the stage as the deep rumblings of the bassoon begin the piano concerto.All the shifts and dramatic moments of the music are echoed on stage. Medea&#146;s anger is punctuated by a sudden orange light (effective lighting by Kevin Connaughton). Possokhov times the action to the music.The boys appear when the lighter music of the flutes is heard.The insistent, almost frenzied portion of the score (reminiscent of La Valse) supports the anxious pas de deux for Jason and Medea.At the conclusion of the concerto, the repeated chords become the stabs Medea makes as she kills her children, mercifully concealed under a cloak.

Despite the careful tailoring of the story to the music, it doesn&#146;t really work.There are obvious connections between the music and the movement, but they are superficial.The music remains at odds with the heart of the drama.These reservations notwithstanding, Possokhov demonstrates an imagination and a talent that is worth fostering. The role of Medea was danced by Katita Waldo, who gave a dramatic performance that captured the anger and the anguish of the character. Pierre-Fran�ois Vilanoba was the fickle Jason, spurning Medea&#146;s advances with a mixture of hostility and disgust. Nicole Starbuck was a sweet, lyrical lover.