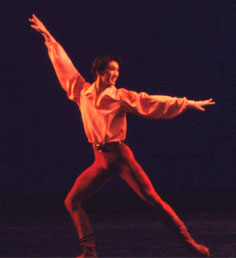 There are precious few septuagenarians who can look as good or move as nimbly as the San Francisco Ballet. The company, which recently raised the curtain on its 70th anniversary season, is at the top of its form. The two dances on this program went from the somewhat sublime to the not-quite-ridiculous with the speed of a tours jete, leaving some spectators a little jet-lagged from the contrast.

After his spectacular success on Broadway, choreographer Jerome Robbins wanted to return to the classical fold at New York City Ballet which had premiered his first work, Fancy Free, in 1944. So, 25 years after that success, Robbins made Dances at a Gathering on the company, beginning as a pas de deux for its two superb stars, Edward Villella and Patricia McBride. Performed to piano works of Frederic Chopin, the work gradually expanded to ten dancers and a half-hour in length. After George Balanchine pronounced it incomplete, Robbins added another half-hour. Not to contradict the revered Mr. B., but less may have been more. Dances at a Gathering is a thing of beauty but it does go on and on. There is only so much you can take of abstraction at one stretch.

With only Jennifer Tipton&#146;s lighting against a blue-sky backdrop with a trace of cloud and the different colors of the simple costumes, there is little to focus on except the dancing, which was exceptional. These &#147;Dances&#148; featured many of the soloists of the company. Yuan Yuan Tan (Pink) was all long legs and reaching arms. Lorena Feijoo (Green) got to show off some of her trademark wit in her solo. There was a meltingly beautiful pas de deux between Kristin Long and Hansuke Yamamoto, and Gonzalo Garcia, Yuri Possokhov and Vadim Solomakha stood out among the men. But Julie Diana, graceful in mauve, stole the show.

The mood followed the music, going from pensive to joyous, flirtatious to rambunctious, with a few athletic mazurkas and polonaises thrown in for the men. Much has been made of the &#147;enigmatic&#148; ending, which has the dancers gazing and pointing at the sky, first in wonder and then in sadness. After its premiere, critics wondered if they were following the flight of birds or worrying about a bomb. Interpretation is foolish at worst and speculative at best, but art adapts to the conditions of the times. As these dancers looked heavenwards, the fate of the Columbia shuttle must have been on more than one mind.

What a difference an intermission makes! Sir Kenneth MacMillan&#146;s Elite Syncopations, originally set on the Royal Ballet of England in 1974, is nothing if not fun. Set in a dance hall, with the band on the stage, it quicksteps along to the ragtime melodies of Scott Joplin, Max Morath and others and it means nothing except a good time. Joe Eula&#146;s colorful costumes and quirky hats gave a feeling of Mardi Gras, adding to the party atmosphere. There are swaggering guys and strutting girls, a dance contest and an unlikely romance between a dorky little guy who can&#146;t seem to get a date (James Sofranko) and a statuesque babe (the regal Muriel Maffre in a rare comic turn). Feijoo, costumed as a sexy drum major, had a riotous time with the &#147;Calliope Rag,&#148; Diana was again a marvel in the &#147;Stop Time Rag&#148; and, partnered by Damian Smith, in a concert waltz by Joplin. Garcia did a high-kicking &#147;Friday Night.&#148;

MacMillan, who died ten years ago, is best known for his long adaptations of the classics (Romeo and Juliet and Winter Dreams, a version of Chekhov&#146;s The Three Sisters) and dark psychological works like Mayerling and The Invitation. Who would have dreamed something this joyous could come from the dour Scot who headed up both the Berlin Opera Ballet and the Royal Ballet in his time? But dance is dreaming made visible and seeing is believing.