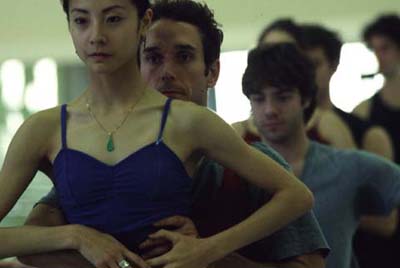 The Death of the Moth and Other Essays

Christopher Wheeldon walked away with the San Francisco Ballet performance Thursday night. And he didn&#146;t have to dance a single step!

British-born Wheeldon, a former Royal Ballet and New York City Ballet danseur now turned choreographer, presented Continuum, the world premiere of a piece he has made on the San Francisco company. The audience really liked what it saw, which is interesting because this is not an easy piece. Set to ten short piano compositions by Gyorgi Ligeti, whose music Wheeldon also used for the 2001 Polyphonia, it is a long, abstract, &#147;leotard&#148; ballet that offers nothing to look at but the dancing. As it is, that&#146;s more than enough.

Wheeldon has called Ligeti &#150; best known for scoring the Stanley Kubrick films 2001: A Space Odyssey, The Shining and Eyes Wide Shut &#150; the Chopin of our time. Indeed, his compositions have a certain mesmerizing quality, gently avant garde but remaining within the canon of classical form. Continuum begins with a rapidly accelerating figure, the dancers moving like the pistons of a machine. Next there is an Adagio, full of arabesques, then a Presto solo for female dancer and an exquisite pas de deux in slo-mo, to a Lento tempo. This is followed by an Allegro male solo in which Gonzalo Garcia just about stopped the show.

And so it went, through multiple variations until the end, when a black backdrop slowly descends, cutting off the light, almost suggesting the end of the world. Wheeldon has a dance vocabulary all his own. His movement is inventive and does not appear to take off from anything or anybody preceding him. The company did exquisite work throughout with especially wonderful turns from Muriel Maffre and the amazing Yuan Yuan Tan, in addition to Garcia. This may have been the first performance of Continuum but, judging from the multiple curtain calls, it won&#146;t be the last.

The program opened with a much older ballet, Roland Petit&#146;s 1974 L&#146;Arlesienne. There must be something about the sun in Provence that drives men mad. It surely happened to Van Gogh, who is suggested in the backdrop of striated mountains and blazing sun, and it happens to the hero of this ballet. Frederi, on the eve of his wedding to Vivette, a country girl, is haunted by the image of a woman he briefly knew and loved in Arles (L&#146;Arlesienne). As the festivities progress, and even in the wedding chamber where his bride desperately tries to seduce him, he is increasingly consumed by the specter of the woman who is not there. The whole thing boils down to a study in obsession, with dance as the medium.

Petit set the piece to Georges Bizet&#146;s famed suite of the same name and his steps were wonderfully suited to each measure. The work is a showcase for the principal couple, set against a black and white clad corps de ballet that executes quirky folk-derived steps in celebration and acts as a kind of sympathetic Greek chorus as the action heats up. The soloists here were Lucia Lacarra, a dream of loveliness in herself, and Pierre-Francois Vilanoba, who mesmerized the audience with his vacant stare and tortured athletic movement. He resists the madness, trying to return to the real world, but in the end, leaps out of the window to his presumed death. A bit melodramatic but so is cutting off your ear.

Val Caniparoli, San Francisco Ballet&#146;s beloved character dancer, has turned choreographer forDeath of a Moth, premiered just a year ago. This is a rather dark work, in spite of much frantic rushing about the stage. The creator has said that the title is metaphorical, taking off from stories of the same name by Annie Dillard and Virginia Woolf, but there sure is a lot of waving of arms, falling down in a heap and women dressed in beautifully-colored gauzy and moth-like gowns.

Set to music by Carlos Surinach, an air of melancholy pervades the piece. The five leading couples danced beautifully but the exciting pas de deux and male solo at the end belonged to Julie Diana and Peter Brandenhoff. Maffre had a wonderful slow turn at the beginning. It had its moments but Death of a Moth seemed a little overwrought after the cool classicism of the Wheeldon. Perhaps it is true that position is everything in life and the whole evening would have fared better by having Moth fly in first and placing the Petit at the end. But, as in any good sandwich, the most delicious part was in the middle. Continuum gave audiences something really satisfying to chew on.