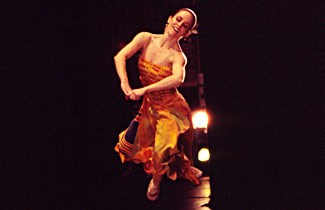 There&#146;s no telling whether the present trendiness of the Kabbalah, the mystical teachings of ancient Judaism, had an influence on the San Francisco Ballet&#146;s decision to restage Jerome Robbins&#146; problematic, oft-revised ballet, Dybbuk, or whether it was the fact that company director Helgi Tomasson danced the original lead, in 1974, at New York City Ballet. Never thought to be one of Robbins&#146; best works, the project nevertheless obsessed him for years, perhaps because of his own mixed emotions about his roots (revealed in recent biographies).

On a more practical level, the ballet, based on a famous Yiddish play by S. Ansky, may have been a struggle for the choreographer on the basis of storytelling alone. For a choreographer who mostly flourished in a world of abstraction, this was a narrative that demanded more literalism of him than he may have been willing to give.

The other "problem" is the music, a stormy orchestral work by Leonard Bernstein. Robbins stated years after the premiere (according to program notes) that he had asked the composer for a chamber piece, but got instead a powerful work that the choreographer felt "constrained" by.

The reconstruction is fascinating, a strong work that may not entirely succeed in terms of narrative thrust or choreographic unity, but nonetheless looks unlike any other ballet. The men are costumed in white tights, then covered in sheer black "coats" and hats that recall Hassidim. In a religiously accurate way, the dancing mostly separates the genders and is dominated by men. The small corps of women wear modest, Edwardian-looking dresses.

The story, a united-in-death saga of two unlucky lovers caught up in the mysteries of the Kabbalah, is clearly enough presented. The Dybbuk, however, refers to the possession of the soul, and the necessity for one lover to possess the soul (if not the body) of the other creates an insurmountable dilemma for the narrative in its climactic moments. Romeo and Juliet this is not.

Yuan Yuan Tan and Gonzalo Garcia, as the two lovers, were exceedingly convincing together. Musically, there were no romantic pas de deux, Bernstein&#146;s choices were always darker, and Robbins&#146; choreographic choices tended to become more modern and idiosyncratic than lyrical. Throughout, the lack of any broad melodic structure for the choreographer to ride on left things somewhat muddled–frantic, rather than clear and dramatic.

Years after the original premiere, Robbins restaged Dybbuk as a series of male dances titled simply, A Suite of Dances. Indeed, his work for men in the piece is extremely strong and the men of the San Francisco company offered impressive dancing throughout. There were variations for Garret Anderson, Rory Hohenstein, Hansuke Yamamoto and Steven Norman and well-danced contributions by Pablo Piantino, James Sofranko and Matthew Stewart. The finale of the ballet, with assembled corps and soloists offered the kind of dramatic excitement that much of the turbulent but confusing middle of the dance lacked.

Also on the program was the masterful Frederick Ashton ballet, Symphonic Variations, looking as striking in its simplicity as it did in last year&#146;s production, danced by the quick and indefatigable Tina LeBlanc, along with an elegant Vanessa Zahorian and lovely Kristin Long. The men, a trio of the company&#146;s taller and most technically adept, prince-like danseurs, included Damian Smith, Nicolas Blanc and Jaime Garcia Castilla.

Lambarena, a 1995 piece by Val Caniparoli, is a crowd-pleaser, a lightweight fusion of African music with dance, which looks colorful and happy, and attempts nothing more. Although one could smirk at the efforts of these classically trained dancers to move their hips and lower their weight in order to emulate true African dance, it is the choreographer who keeps the women en pointe, and the men jumping inauthentically, when not bent-over like farmworkers. To Caniparoli&#146;s credit, authenticity is not necessarily the intent. Like a balletic version of The Lion King, this is all about fun. A truer expression of cultural fusion might come from a real African choreographer. Someday.

(18673)
$6.99 (as of January 24, 2021 - More infoProduct prices and availability are accurate as of the date/time indicated and are subject to change. Any price and availability information displayed on [relevant Amazon Site(s), as applicable] at the time of purchase will apply to the purchase of this product.)

(21979)
$17.39 (as of January 24, 2021 - More infoProduct prices and availability are accurate as of the date/time indicated and are subject to change. Any price and availability information displayed on [relevant Amazon Site(s), as applicable] at the time of purchase will apply to the purchase of this product.)
related posts