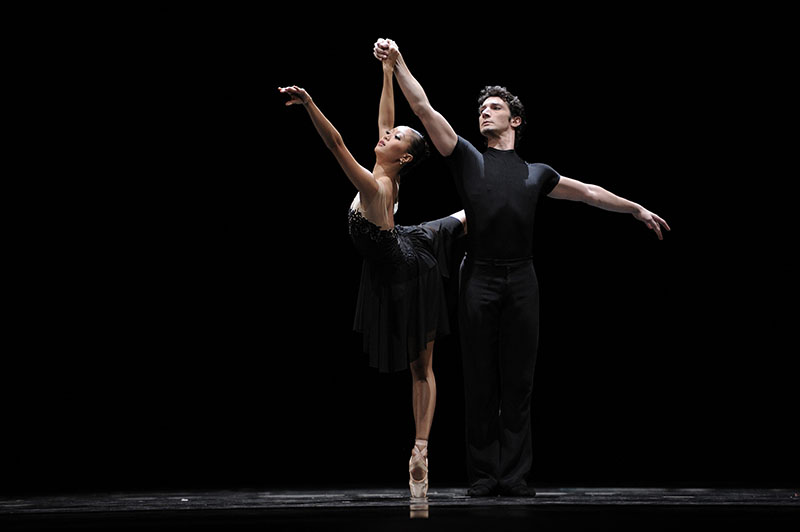 Helgi Tomasson soaked up two ovations at this gala, both while standing center stage of the Opera House. The first came before the performance, during obligatory remarks by board chair Richard C. Barker, who presented Tomasson a souvenir album to mark his 25th year with the company. The second (more heartfelt), the artistic director generously shared with his dancers, after they had streaked through a mini-marathon of 16 works, 10 of them choreographed by Tomasson. Beneath a cascade of mylar squares and silver balloons, he beamed.

He had good reason to smile. The program had gone over without a hitch, representing a survey of his style over the last 20 years, from the formalism of 1990’s “The Sleeping Beauty” to the looser, more frenetic look of 2007’s “On Common Ground.”

A number of the pas de deux shone in a special light, showcased together on this single, singular evening. These short dances have for the most part become a key part of Tomasson’s legacy to this company. Time and again, he has created meaningful and intimate steps that imprint the emotional context of the music in visual terms. Seen in retrospect here, his two decades of output now appear astonishing. In “Chaconne for Piano and Two Dancers,” choreographed by Tomasson to Handel’s Chaconne in G major (played with muted sensitivity by Roy Bogas), Vanessa Zahorian and Davit Karapetyan brought a kind of formal beauty to their athletic solos, dancing around each other for the most part and finally connecting in the work’s last phrases. In the pas de deux from “7 for Eight,” Nutnaree Pipit-Suksun and Pierre-François Vilanoba put stately touches to the breathtakingly beautiful reading the choreographer gives to Bach’s Concerto No. 5. And the pas de deux from “The Fifth Season,” set to a violin piece by Karl Jenkins, Yuan Yuan Tan and Damian Smith danced in perfect balance, their blue-lit embraces exhibiting an equilibrium of longing, showing how Tomasson had broken through the stereotype of male as supporting partner only in this romantic duet. Only the “Tuning Game” pas de deux, danced to an excerpt of John Corigliano’s cerebral “Concerto for Oboe and Orchestra” by Lorena Feijoo and Vitor Luiz, looked calculated in execution. And the balcony pas de deux from Tomasson’s “Romeo and Juliet,” its action sweeping across the stage and up a steep staircase, had a gorgeous fluidity, marred a bit by an overexuberant Joan Boada as Romeo to Maria Kochetkova’s distracted Juliet. (Here’s hoping a few more rehearsals will improve their performances when the work is revived later this spring.)

Sarah Van Patten and Vilanoba rendered “The Man I Love” from George Balanchine’s “Who Cares?” with a sensual, effortless grace that perfectly reflected Gershwin’s sultry music. The romantic glow the pair radiated uplifted every heart. The flip side of Mr. B, represented by the pas de deux from “Agon,” a modernistic work set to a Stravinsky score, looked stilted by comparison. New York City Ballet alum Sofiane Sylve (partnered by a tentative Anthony Spaulding) put the requisite tension in her stiff extensions and mechanical penchés, but the piece felt disconnected to the rest of the program. (Why it was included is anyone’s guess; it’s not scheduled this season.) Other program oddities included the pas de deux from “Rush” by Christopher Wheeldon (he of the copyrighted surname) and the pas de trois from Tomasson’s “On Common Ground” (set to a Ned Rorem string quartet). Though each was well-performed, neither had anything of substance to say at this juncture about either the company or the choreographer.

In “Bugle Boy” from “Company B,” an energized Gennadi Nedvigin, returning after a season on the sidelines owing to an injury, put fluid, full-on touches to Paul Taylor’s bebop pastiche of songs sung by the Andrews Sisters. But for all of his boogie-woogie, Nedvigin looked somewhat uncomfortable. Not that a classically trained dancer can’t appear hip, it’s just that the artifice here became too evident. And in the Winter section of “Le Quattro Stagioni,” young principal Taras Domitro looked eager to take off to the Vivaldi concerto, and he might have, were it not for the silly movement of the corps he was attached to—a kind of hunched shuffling of bodies. Along with the program opener, an oddly muted rendition of “Typewriter” from Mark Morris’s “Sandpaper Ballet,” this closing number seemed an odd choice, neither a rouser nor particularly interesting to watch.

Sandwiched in between on the long program were two exceptional works that highlighted another Tomasson legacy: his knack for making ensembles snap. In the wacky “Mistake Waltz” (from Jerome Robbins’ “The Concert,” set to Chopin’s “Waltz in E-flat minor”), a host of corps dancers hammed it up with daffy abandon. In “Concerto Grosso” (which Tomasson choreographed to a Corelli piece for violins), five men partnered each other in a series of intensely athletic and sensual (some might say homoerotic) duets and trios, then broke away for solos. None was more superb than Pascal Molat, his brilliant technique perfectly on view in muscular pirouettes and virile assemblés. For the money, he gives this work (and Tomasson’s vision for it) an impressive turn.

As a celebration to mark his quarter century with San Francisco Ballet, Tomasson deserved this moment. Though the repertory he has created on this company—some 40 works—may not always signal choreographic genius (the less said the better about “Flute Moon,” a piece he made for Tan to music by Bright Cheng), his acumen for building a troupe of robust, disciplined, multicultural dancers is unquestioned. He stands among the top three artistic directors of classical ballet now operating in the United States. His board supports him readily, his staff regards him highly, and the ballet audiences he attracts to the company return enthusiastically season after season. But most of all, his company members love what he has given them, and they show it in their all-out dancing.