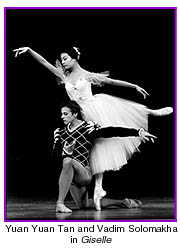 Before there was Swan Lake or Sleeping Beauty there was Giselle. The durable old dame has been showing up in theaters across the world, danced by almost every prima ballerina worth her toe shoes, since she first bowed in Paris in 1841. And, much to the envy of many another woman, she hardly shows her age.

In spite of time, Giselle does not clunk across the consciousness like an old war-horse. She floats, wafts, glides like the wispy spirit she becomes at the end. We are left with a memory of white tulle and arabesques and love that reaches out from beyond the grave.

The new production that bowed at San Francisco Ballet last year does nothing to diminish this beauty. On the other hand, Helgi Tomasson&#146;s version, based on earlier stagings by earlier choreographers, doesn&#146;t do a whole lot that is new, other than restore some of the mime. A circle drawn across the face means "you&#146;re beautiful" and a hand over the heart signifies either "I love you" or "Quit dancing so much, girl. You&#146;ll give yourself a coronary!" Auxiliary smirks, shrugs and hands held to the brow intensify the old-fashioned character of the ballet.

There are some athletic solo sequences for the hero, Albrecht, that take the role a step above mere partnering but whether this is Tomasson or traditional this reviewer doesn’t recall. It is, on the whole, a respectable resuscitation that may take "Giselle" smoothly into her third century of popularity.

The first act looks like a Breughel painting in motion, all brown and russet, in keeping with the peasant harvest scene. When the heroine jetes out of her front door, in a pale blue tutu, it is an immediate hint that she is meant for more ethereal things. This is a story of class distinction: an innocent lass of the lower classes is wooed by a highborn nobleman in disguise. When the ruse is revealed &#150; by the jealous suitor Hilarion &#150; Giselle goes mad and dies, whether from heartbreak, a self-inflicted wound from her lover&#146;s sword, or the weak heart her mother keeps warning her about, is left to the viewer to decide.

Filled with earthy peasant dances and the tentative explorations of young love, all set to the delightful score of Adolphe Adam (who is remembered for this work alone), it is a little bit of exposition and a lot of divertissement until the moment of betrayal. It is here, in the famous Mad Scene, that Giselle lets her hair down. Literally. The almost-too-innocent young girl becomes confused, distraught, stumbling (albeit gracefully) from one group to another in search of someone who will say it isn&#146;t so, her hair streaming around her face in wild disarray. Suddenly she is a woman, with a woman&#146;s real problems and she doesn&#146;t have a clue as to how to handle them. Her mind cracks.

At Tuesday night&#146;s opener, Lucia Lacarra accomplished this transition beautifully. But, it is after death that Giselle (and Lacarra) truly comes alive. Opening on a somber chord in a dark and tangled forest that can truly give you the willies, Act Two is a "white ballet," set in a half-world between death and life. The forest is inhabited by the Wilis, a troupe of maidens who died before their wedding day and are (inexplicably) doomed to spend eternity dancing. Even though the forest is off-limits to the male sex, Albrecht (Cyril Pierre) is drawn there, to lay offerings of flowers and his remorse on Giselle&#146;s grave. So is Hilarion, the betrayer (Peter Brandenhoff), who first is forced to dance himself to exhaustion and then is drowned in a nearby lake by the vengeful spirits. Tomasson handles the Hilarion sequence with dispatch. The poor guy is shoved into the lake almost before we know he is there. It feels a little silly. Albrecht faces a similar fate, saved only by the intercession of the spirit of Giselle and the rising sun.

Muriel Maffre was Tuesday&#146;s Myrtha, Queen of the Wilis, whose imperious, merciless air gives the lie to her name. No mirth here, only a regal iciness, which Maffre communicated in chilly spades, although, in her opening solo, some of the steps were unsure. But the main event is Giselle and Albrecht. Flanked by the corps, ghostly in their long white tutus, veils over their faces, they dance a love only hinted at in Act One. Lacarra offers one wondrous arabesque after another and, when she sinks back down into her grave, the audience, like her bereaved lover, grieves for her loss &#150; before exploding into thunderous applause.