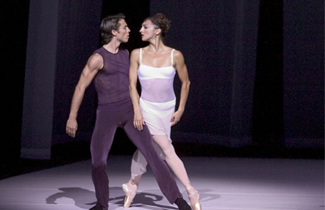 A couple of "in-house" pieces and a big, bold dose of Balanchine created a surprisingly robust blend of flavors at San Francisco Ballet&#146;s Program 5. Artistic director Helgi Tomasson, with his Balanchine/New York City Ballet pedigree, shows a canny eye for programming the works of his former boss in interesting combinations with the works of others, including his own.

Two Tomasson works opened the evening. Meistens Mozart had a youthful air, highlighted by songs presented in recordings by the Tolzer Boys Choir. Featuring six members of the corps, the 1991 piece is an ode to ease and frolic, with a choreographic vocabulary that ventures out of strictly classical language, into the looser, rounder movements of modern dance. Tomasson&#146;s affinity to the work of Mark Morris may have something to do with his own desire to say something different, physically, while remaining musically attentive, in the way that Morris works. The dancers, costumed in white, were relaxed and confident. It was another reminder that even the youngest members of this company perform at the top levels of the form. There was nothing spectacular on display, but the group dynamic successfully created an ambience that seemed nostalgic, the choreographer looking back. This was no group of young people in the throes of sex and rebellion, it was a blander, Disneyfied version of near-adults, but it did match the music nicely.

Concerto Grosso, also by Tomasson, began as a bit of fluff for the 2003 Season Gala, an opportunity to show off the skills of some of the company&#146;s men. However, the work Tomasson created has an almost surprising contrast of music and movement, a blend of softness and strength, bravado dancing for the five men against the lightness of the Geminiani Concerto ("La Follia" after Corelli). Only twelve minutes long, featuring one principal and four corps dancers, it is a great showcase for men, with dazzling leaps and opportunities for show-off pirouettes. But Tomasson has also created some interesting designs in space. A circling pattern, and another section with interlocking leaping zig-zags, were satisfying not just in design, but in performance, as each dancer used his power to travel with clarity and testosteronated speed. Nicolas Blanc, the soloist, dug into his meaty feats of technique and was on-the-money in every leap and turn.

Tomasson&#146;s protege, Yuri Possokhov, coming off a debut in the last program, the striking, Reflections, reprised 2004&#146;s beautiful Study in Motion. With its moody piano score, a combination of Scriabin sonatas and preludes played by Michael McGraw, and restricted playing space defined by towering, filmy sections of curtain, the overall effect is one of cinematic imagery, sleek movement that skates and shoots through space, dancers who are paired but not. Tina LeBlanc and Katita Waldo danced with the kind of strength that made their lines seem to linger after they had already gone. The cast of eight blended in choreography that was nearly faceless, not an opportunity for display as it was a seamless series of moments sweeping on and off through the breeze, just like the waving curtains.

Finally, The Four Temperaments. Black and white. Balanchine. Hindemith music for piano and string orchestra. The famously angular simplicity, squadrons of dancers kicking and hip-thrusting their way across stage, the genius ability to manage big groups and create interest in every corner of the stage, all at once. Still as revolutionary-looking today as it was in 1946, when it was presented by Balanchine&#146;s fledgling company on the stage of the Central High School of the Needle Trades in New York, Tomasson has kept the piece in the repertory (San Francisco first presented the work in 1974) with reason. There&#146;s nothing like it.

Those looking for narrative can spend frustrating amounts of time trying to understand how the "Melancholic," "Sanguinic," "Phlegmatic" and "Choleric" variations represent aspects of human health. Better to enjoy the separate weirdnesses of each section, the way Nicolas Blanc drops, again and again into a lunges and backbends, how Katita Waldo and Stephen Legate create seamless partnering that looks nothing like Giselle, how Damian Smith goes floppy instead of stiff, and how Muriel Maffre shows a miraculous combination of legginess and speed. There&#146;s a nice parallel in the program, in the use of youth, reminiscent of the Mozart curtain-opener, as Temperament opens with three couples culled from the Corps who present the themes for the dance. The final image, a stage filled with moving bodies crossed by popcorn lifts looks like dolphins jumping out of the primordial sea.