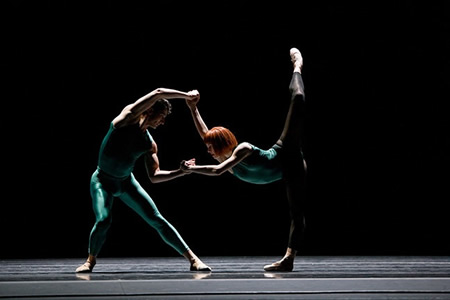 Whatever hard times loom, they were banished on this winter night at San Francisco’s Civic Center as the dance faithful ignored the gathering clouds (meteorological and economic) and strutted about the Opera House for the ballet’s 76th Anniversary Gala Celebration. Amid the spectacle of designer frocks and bling to rival D.C.’s presidential inauguration a day earlier was a performance by the San Francisco Ballet that energized an already spirited crowd. The program showcased the company’s range and its exceptional dancers, providing a tantalizing indication that what’s in store this season defies the prevailing gloom in the performing arts. It is to company Artistic Director Helgi Tomasson’s credit that he has built a strong and eager ensemble, and a tribute to the board that has supported him financially in elevating the San Francisco Ballet to world-class.

As with most galas, the evening breezed by in a blur, with ten short pieces and excerpts that nonetheless demanded feats of technical and physical brio. The program, dubbed somewhat misleadingly “Russian Treasures” (not all works were by either Russian composers or choreographers), represented a revival of the pas de deux as a mainstay of the repertoire, from George Balanchine’s setting of Tchaikovsky’s so-named work (discovered as part of his original “Swan Lake” score) to a world premiere of company choreographer Yuri Possokhov’s “Raymonda Pas de Deux.”

The program burst to a start with Balanchine’s “Tarantella,” its explosion of quick steps taken on with goofy delight by newly promoted soloist Frances Chung and corps member Daniel Deivison-Oliveira, who matched her with campy abandon. (Pianist Michael McGraw gets a bow for his presto execution of Louis Gottschalk’s “Grand Tarantelle.”) Equally breathtaking later in the program were Taras Domitro and Vanessa Zahorian in the pas de deux from “Le Corsaire,” wherein Domitro’s ciseaux leaps literally drew gasps from the crowd. In his early 20s, this newly appointed principal possesses an amazing physicality, at once refined and athletic. And though Zahorian began a bit unsure during her first variation, she was as precise and scintillating as her partner after warming up.

PD2s from a couple of modern pieces also landed on the bill: one from Christopher Wheeldon’s “Polyphonia” and the other from “In the Middle, Somewhat Elevated” by William Forsythe. Katito Waldo and fellow principal Ivan Popov, newly arrived via the Kirov Ballet, gave the Wheeldon work a requisite eerie, mechanical feel: two spiders in a to-the-death standoff. Likewise, Sofiane Sylve and Pierre-François Vilanoba imparted a sinewy look to the Forsythe piece, carrying out their strange dance like lovers working out at the gym.

In the Tchaikovsky, principal Tina LeBlanc appeared in good form (she will soon retire to teach at the ballet’s school), partnered by corps newbie Isaac Hernández. Together, they brought a high-spirited verve to the dance—perhaps too much so. Hernández may have been masking his lack of musicality with overexuberant leaps, LeBlanc trying a bit too hard to match him. In the end, even with a flawless “six o’clock” penché and lift that whisks the couple into the wings, their few minutes onstage lacked a certain grandeur.

The opposite proved true for the “Raymonda,” Possokhov’s stately new re-imagining of Marius Petipa’s steps to excerpts from Glazunov’s score. Principals Maria Kochetkova and Joan Boada rendered the dance (inflected as it is with somewhat heavy-handed Hungarian overtones) as light and elegant as an airborne courtship rite. Possokhov’s reduction from this long ballet has a lovely, classical gloss, giving the maturing Boada in particular a moment to shine as an ever-athletic, increasingly graceful lead.

Kochetkova exhibited her effortless style earlier in the program as one of eight excellent dancers in the excerpt from “Double Evil,” one of the hits from last season’s New Works Festival by Boston Ballet’s Jorma Elo. Along with other standouts Elana Altman, Pascal Molat, and James Sofranko, she executed the piece with bravado, spinning like a top to the percussive music (by Philip Glass and Vladimir Martynov). We can look forward to seeing this work (with its brilliant costumes and lighting by Holly Hynes and James F. Ingalls, respectively) in its entirety later this spring.

Two other ensemble pieces rounded out the gala program: an excerpt from Act II of “Giselle” and the Men’s Regiment and Finale from “Stars and Stripes.” In the former, Yuan Yuan Tan perfectly inhabited the role of the lovelorn title character, her pas de bourré a wonderment of otherworldly grace. She got but wooden support from Ivan Popov, whose Albrecht seemed to be sleepwalking. But there was no such lethargy in the latter, set to John Philip Sousa marches by Balanchine in a series of deliriously precise crossings and recrossings. The enthusiastic, multi-culti dancers gave this a rambunctious rendition, redefining patriotism in this new era and underlining their youthfulness by the sheer joy they derive from dancing.

Note to the stage manager: An errant bit of confetti can upstage a dancer worse than a ringing cellphone. Paper squares meant for the end of “Stars and Stripes” floated down prematurely from the catwalks on a couple of occasions earlier in the program and in no way enhanced those works. Vigilance, please, in deference to these most disciplined dancers.