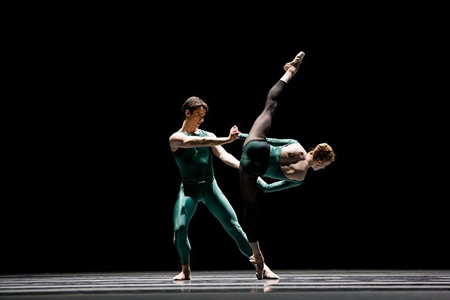 Mixed repertory: “Naked” by Stanton Welch, “Ibsen’s House” by Val Caniparoli, and “In the Middle, Somewhat Elevated” by William Forsythe

With a mixed bag, it’s wise to save the best for last. Artistic Director Helgi Tomasson has applied that principle to Program 2 of San Francisco Ballet’s 2009 season, and he succeeds, leaving audiences with an enduring rouser after on-again, off-again pieces from last season’s New Works Festival.

Though some have found Stanton Welch’s work aggravatingly spoofy (think “Tu Tu”), his “Naked,” which premiered last spring and begins this program, has a more buttoned-down look and a burnished quality, even though he gets in a few surprises and goes for shock value perhaps a trick or two too often. Welch gives Poulenc’s quirky Concerto for Two Pianos in D minor his customary irreverent treatment, including lots of crotch exposure during big, blossoming lifts. (Holly Hynes’s tutus emphasize this, with frilly, diaper-like bottoms instead of skin-tight leotards.) The effect is generally whimsical, if not altogether beautiful.

But push aside Welch’s grandstanding and a more serious aspect emerges: “Naked” is about ballet dancing—specifically about the men and especially the women who perform it, the ones who create beauty from their own pain. This is evident in Pascal Molat’s accelerated entrechats as well as Ruben Martin’s precise shadowing of the ballerinas. There’s a tenderness in Yuan Yuan Tan’s solos, though it’s not for her partner. Instead, she rarely makes eye contact, and as the music assumes a dulcet tone, we witness that her closed eyes evince a kind of self-satisfaction that comes from within. The dancers give this ballet heart, despite its anti-romantic surface.

Viewing “Ibsen’s House” for the second time did not reinforce the notion that a particular work often looks much better once the company has had some time with it, working out the tricky bits and claiming victory over the choreographer’s vague indications or shaky transitions. Val Caniparoli’s attempt to give balletic face to Norwegian playwright Henrik Ibsen’s female protagonists had a choppy feel during its debut last April, and it has not benefited much from a little aging.

Set to Dvorak’s lilting and expressive Piano Quintet in A major, the piece juxtaposes five dramatic heroines in moments of crisis. Though the composer’s repetitive themes give the choreographer opportunity for multiple exits and entrances for each character, Caniparoli hasn’t come up with interesting ways of delineating them in movement terms, relying instead on overused gestures to signal who’s who. Corps member Clara Blanco as Nora from “A Doll’s House” and principal Katita Waldo as Mrs. Alving from “Ghosts” make the best of limited means, imbuing their fouettés and pirouettes piquées with as much character as possible, as do their male counterparts, Luke Willis (Torvald) and Davit Karapetyan (Oswald). And principal Lorena Feijoo imparts a distinctly fiery twist to Hedda Gabler (though she at times rushes her cues). But the sameness of lifts and running jetés applied again and again makes for visual monotony (despite Sandra Woodall’s distinctive period costumes). By the time an odd trio for the men has surfaced in the scherzo and the ballerinas are looking suicidal during the sprightly finale, you have to wonder what Caniparoli’s intentions were—beyond the program-note cliché that Ibsen’s ideas “hold resonance today.” That’s a starting point, not a concluding one.

By far the most engaging work of the evening is “In the Middle, Somewhat Elevated,” William Forsythe’s ageless “theme and variations” (he made it for the Paris Opera Ballet in 1987, and it came into the San Francisco Ballet’s repertory twenty years ago). Its placement at the end is perfect timing: It’s as if, after striking serene poses and presenting perfect turnout in the earlier works, the dancers finally get to cop an attitude. Put through their paces to a pounding recorded score (by Thom Willems), they appear to enjoy the chance to strut and show off, as if the proscenium were but a mirror they were gazing into, smug and pleased by what they see.

That’s what we, the audience, see. In fact, there’s a lot more to this dance. It’s hard work (for instance, try gyrating your pelvis for numerous revolutions with feet in the third position and you’ll understand). The company makes the updated classical idiom look effortless—the way they might relax after a day at the barre, unwinding at the gym or on the dance floor to a techno beat. And this is no less demanding than whirling about the stage to Dvorák or Poulenc, even though the music sounds more, well, danceable. Therein lies the key to Forsythe’s brilliance, as well as the dancers’: They give us something thrilling and provocative and all-out fun to watch while appearing to have fun themselves.

Leading the standouts is principal Kristin Long. Her hair in a curly mop, she brings an edgy bounce to all of her moves, particularly in the concluding pas de deux (with an energized Ruben Martin). Pascal Molat exhibits his usual classy dexterity in a number of solos, and Joan Boada and Lorena Feijoo swing with stamina and flair. But the entire cast shines, really: These are smart men and women who know exactly what they’re bringing to the demanding piece, and they work it without seeming to.

(2380)
$0.01 (as of January 26, 2021 - More infoProduct prices and availability are accurate as of the date/time indicated and are subject to change. Any price and availability information displayed on [relevant Amazon Site(s), as applicable] at the time of purchase will apply to the purchase of this product.)

(15978)
$1.87 (as of January 26, 2021 - More infoProduct prices and availability are accurate as of the date/time indicated and are subject to change. Any price and availability information displayed on [relevant Amazon Site(s), as applicable] at the time of purchase will apply to the purchase of this product.)

(17871)
$10.57 (as of January 26, 2021 - More infoProduct prices and availability are accurate as of the date/time indicated and are subject to change. Any price and availability information displayed on [relevant Amazon Site(s), as applicable] at the time of purchase will apply to the purchase of this product.)
related posts