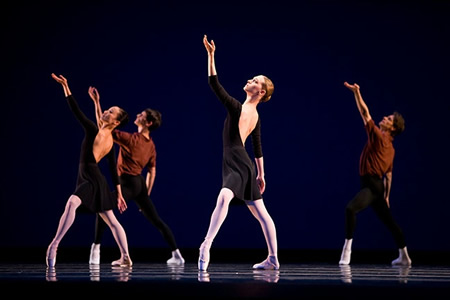 Works by Mark Morris: “A Garden,” “Joyride,” and “Sandpaper Ballet”

Orchestra conducted by David LaMarche and Martin West (for “Joyride”)

Mark Morris has enjoyed a 15-year collaboration with San Francisco Ballet, and by and large, audiences have enjoyed the results. From “Maelstrom,” his first work set on the company, in 1994, to last season’s “Joyride,” we have benefited from nearly biennial premieres. Much of it has endured in the repertory to merit a mini-retrospective, and so the ballet has mounted an all-Morris evening that showcases the choreographer’s strengths (and foibles) in three different dances.

The evening’s first, “A Garden,” represents Morris in his classical vein: a restrained composition at once formal and inventive. Using Richard Strauss’s “Tanzsuite,” an oft-romantic arrangement of eight François Couperin keyboard pieces, Morris builds what at first seems to be a series of baroque court dances, with his six couples moving about in stylized patterns that come off as somewhat lax and drowsy. (Morris intended this work to be “modest” and “anti-virtuosic,” and the dancers respond by appearing nonchalant rather than showy.) Then, beginning with the Carillon and through the Sarabande and Gavotte, he starts mixing in his modern flourishes: arms held forward, palms-down, as if leaning on a table; a hand placed oddly on a hip or splayed on a partner’s sternum; and awkward lifts that make the men look as if they’re hauling logs. He doesn’t let up through the Wirbeltanz, giving his dancers a requisite whirling workout (with Tina LeBlanc her usual bright, athletic presence). Then, in the Menuett, we get a courtship pas de deux tinged with contemporary angst (Sarah Van Patten performs with utter grace, and Ruben Martin partners her with un-idealized tenderness). For all of its juxtaposition of old and new, “A Garden” surprises in the ways it becomes something else entirely, a not-quite-classical, not-exactly-modern dance that comments, if not always eloquently, on the tug both forms exert on our hearts and minds.

“Joyride” also presents something of a surprise. Commissioned for last season’s New Works Festival, this latest Morris opus takes an ambivalent approach to a jumbled score by John Adams—“Son of Chamber Symphony,” featuring his customary meter switches and pots-and-pans percussion—without ever mastering it. When the music resembles “West Side Story,” the dancers leap and shimmy and writhe on cue (clad in Isaac Mizrahi metallic unitards that make them look more like the Jetsons than the Jets), then stop abruptly and walk offstage in that trademark Morris sashay, arms swaying. This would be fine once or twice, but its overuse here makes you wonder what Morris is getting at: Does he think the music is insignificant, worthy of being “dropped” as he moves on to the next phrase? Or is it a clever visual counterpoint to the disjointed nature of Adams’s composition—underlined by the small screens attached to the dancers’ stomachs, blinking random digits? More confusing still are the pas de deux, in which interchangeable partners affect romantic inclinations, then exit with arch-blasé shrugs. By the time the drums begin pounding away (Philip Glass, anyone?), with the indefatigable Pascal Molat whirling across the stage clutching his throat and corps standout Martyn Garside kick-boxing his thighs in the air, it’s apparent that cohesion was not foremost in Morris’s head as he worked this one out in the studio. He has remarked that all he sought was asymmetry in an empty space. But the contradictions on display here are more confusing, having the feel of a work-frozen-in-progress (in other words, don’t expect any revisions). Some might say “Joyride” is an “idea” ballet, one about the allure (however false) of urban glitz. If so, it’s a cynical glamour, one that evokes smirks rather than smiles.

The evening’s finale, “Sandpaper Ballet,” has no such jaundiced aspect. It’s pretty much all about fun and laughter. Set to ten of Leroy Anderson’s delightfully kitschy orchestral baubles (though not, curiously, the title piece), this fetching ballet shows every sign of transcending its trifle status, becoming the company’s standard showcase of Morris’s wit: the giggle-inducing precision of “The Typewriter”; the silly hip sways and campy raised arms of “Jazz Pizzicato”; and the giddy alacrity of dozens of feet zipping through “Fiddle Faddle.” Even when the action slows a bit, as it does for the sultry (yet iconoclastic) love duet to “Balladette” (in which Kristin Long and Pierre-François Vilanoba sway in a frankly erotic embrace), there is reason enough to smile. And it’s a wonderful sight to behold LeBlanc and Vanessa Zahorian, their “Swan Lake” duties over for the season, enjoying themselves like teens at a sock hop in their Kelly-green-and-white outfits (more Mizrahi madness), beaming pure joy. What a gift Morris has given the company, and his fans. This is a ballet that makes you smile, performed by dancers of consummate technique and charm. You feel like hugging them, you feel like hugging Morris, you feel like hugging the people around you. Moreover, as you leave the Opera House and step out onto the street, you simply feel like dancing.