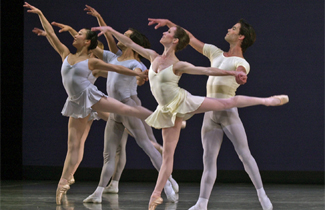 A dance is just a few moments in time, but a dance performance is colliding events, dancers coming together on a stage, what happens then. At a San Francisco Ballet performance on March 10, there were moments to be relished. There was the excitement of a World Premiere, Reflections, a big group piece by Yuri Possokhov, the former Bolshoi danseur who has been with San Francisco since 1994, lately building up a resume as a choreographer.

Another momentous occurrence was actually the performance of the entire company in Square Dance. Light and fast, young, confident, the corps in particular was looking the way perfection might look on a 21st-century version of a leading ballet company.

Possokhov, with nine pieces under his belt since he began composing duets for ballerina friends in 1997, takes a big step forward in Reflections, the boringly named, exciting to watch, black, white and red extravaganza choreographed to Mendelssohn&#146;s Symphony No 1. This is Possokhov&#146;s first big full-company work, and the first time he has attempted to work within a strictly classical framework. Claimed to be based on Bergman&#146;s film Cries and Whispers but looking more like a dancerly expression of moving to music, Possokhov works well with the group sections, creates delightful designs and in the solos, some wonderful opportunities for dancing.

Sets and costumes, by Sandra Woodall, featured flimsy, paper-thin tutus for the women, black tank suits for men, and a black and white, piano-key backdrop upstage, which peeled away to reveal mirrored sections and the possibilities for infinity. The delicious lighting by David Finn played up the eye-popping effect a bunch of red-tutu&#146;d dancers can create, when suddenly dancing onto a stage full of white and black.

The Symphony features four movements, and Possokhov, like Helgi Tomasson, Possokohov&#146;s boss, clearly enjoys choreographing for men. The Third Movement is an all-male affair, lead by Nicolas Blanc. San Francisco has riches in danseurs, riches and talent, and the across-the-board excellence from the twelve men holding the stage for Blanc was impressive. Possokhov has a real knack for creating kinesthetically satisfying movement, fleeting perfect moments and athleticism always moving towards release, ease, not more steps. The Russian is talented, he is playful and open, he clearly loves the creative process, and he comes up with enjoyably crafted works.

In Reflections, as in the Balanchine curtain-opener, Square Dance, the chorus looked absolutely top-notch. The premiere featured a cast of 35, and there was not a missed placement, jump, turn or finish. The one misstep in the piece was Muriel Maffre&#146;s casting, or at least the choreography for her in the Second Act pas de deux with Damian Smith. The movement is either designed to be ungainly, or Maffre has determined to perform it that way, which is not the usual case with this dancer. Without a narrative clue, one can only blame the dancer, Maffre kept throwing herself into the steps, almost literally while everything else about this piece has more finesse. It is true, the leading female in Cries and Whispers does die, but making a ballerina look bad is not a sound decision when there is no other expression of the narrative circumstances to which Possokhov may be alluding. And the relationship with Smith was not really a relationship, more a cool, classical partnership, all business.

Lorena Feijoo was meant to be a red tutu in the First Movement, just as Kirstin Long looked right in white. Although there are multiple casts, it is a pleasure to see Possokhov respond to and explore personalities here. The form may be classical, but like the best of Balanchine, it is clearly a relationship between each dancer and the choreographer that drives much of the invention, at least in the leading roles.

Square Dance (1957), was stripped of its Americana touches during Balanchine&#146;s lifetime, in order to discover the purely classical dance underneath, which, along with the Vivaldi/Corelli score, had always seemed like a joke. The dance that is left behind is vintage Balanchine, but the faultless feet and soft and quick facility of the San Francisco dancers made the piece seem fresh and new. Vanessa Zahorian and Gonzalo Garcia are required to pay their dues in several fiendishly difficult passages. The piece is more petite than grand allegro, thus calling for nimble rather than dramatic dancers. Still, Garcia had something round-around-the-edges about his phrasing that almost brought to mind boots, jeans and scratchy fiddles. Less deliberate, perhaps, were the scratchy violins, having an off night down in the pit. Gary Sheldon conducted.

Gross Fuge, seen last season, is Hans van Manen&#146;s very European, modern dancey battle or exploration of the sexes, composed originally for the Nederlands Dans Theatre in 1971. Van Manen, a widely-presented choreographer on the continent, has been less commonly represented here, but San Francisco Ballet artistic director Tomasson, has ideas to change that. As seen here, Van Manen avoids the austere, abstract, Cunninghammy aspects of modern dance and sticks to the musical visualization basics. The music is Beethoven&#146;s Grosse Fuge Op 133, a string quartet, and, particularly in the Alpha men (in skirts) opening it could have been a Bach organ prelude.

Although the piece seems dated with its 1970&#146;s sexual mores, and the groin kissing and skirt swinging, the stripping and belt swinging were almost funny, there is still a lot of interesting dancing. Moises Martin lead the quartet of men and danced with near abandon, while among the women, three lesser lights of the company were unable to outshine Lorena Feijoo, who overacts and seems egotistically unable to fit into an ensemble. Too bad–she can sure dance.