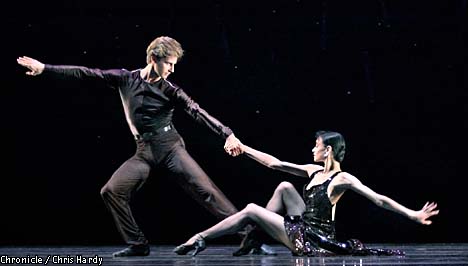 The first program of the new San Francisco Ballet season really takes the cake. Not chocolate or vanilla but Hans van Manen&#146;s Black Cake, a richly layered confection that premiered in 1989 with the choreographer&#146;s home company, the Nederlands Dans Theatre. The fact that the Dutch dance troupe will be coming to Zellerbach Hall in Berkeley in February whets the appetite for more delicious treats that may be in store.

Black Cake is about a party. The curtain goes up on primping women, in short evening dresses and high heels, and strutting men in evening clothes. Finally, with a tug at a zipper here and a slick of the hair there, they are ready to dance. The music is Tchaikovsky and the dancing elegant but formal. Not much feeling here and you begin to get the idea that these people may not like each other all that much.

The three ensuing pas de deux reinforce that hunch. The first couple (Lorena Feijoo and Roman Rykine) keeps pushing each other away as they try to come together &#150; a metaphor for real-life relationships if ever there was one. Her arms are stiff, even as she yields to his embrace in a series of sensual backbends.

Then Julia Adam and Yuri Possokhov enter to the staccato, syncopated strains of Stravinsky. This is a quirky dance, with offbeat movements that echo the music. The tension is upfront here. The male dancer tries to dominate until she pushes him down and elegantly places a foot on his prone form. Then he goes literally crawling after her.

The third couple (Tiekka Schofield and Benjamin Pierce) comes on to the overwrought operatic melodies of Pietro Mascagni. She is an over-the-top drama queen and he is a worthy consort. Their dance is a kind of parody of emotional Russian ballet.

The whole company comes together for the finale &#150; and are they ever drunk. Van Manen has an expressed fascination with walking steps that shows here, only the walking is pretty unsteady &#150; not haphazard but carefully choreographed. Everybody is into themselves as they pursue a waiter (the only one who is walking straight) for more drinks. It&#146;s all pretty funny with an underlying thread of sadness, like when you are at a fancy gala with a lot of phony people. Been there, done that. Wonderful.

Black Cake is sandwiched in between two attractive, but less striking ballets. The opener, Christopher Wheeldon&#146;s Sea Pictures, is a lovely thing with just a hint of a story line about sailors who go off to sea, leaving their loves to wait on the shore. Set to five Elgar songs about the sea, it suffered slightly from the indistinct diction of mezzo-soprano Katia Escalera.

The first section, &#147;Sea Slumber Song,&#148; had the ten dancers wafting and skittering across the shore with the wind against a projected photograph of a beach. It had a feeling of aching melancholy. "Where Corals Lie,&#148; the best of the five songs, was a more lighthearted pas de deux for Julie Diana and Damian Smith. These two dancers, plus Tina LeBlanc and Yuri Possokhov, led the company in &#147;In Haven,&#148; as each man regretfully says farewell to his sweetheart and then goes to his ship. The next section belonged to Possokhov, who seems to have taken ill on board. He has a hallucinatory pas de deux with LeBlanc and then rolls to his death. In the final &#147;Swimmer,&#148; the men return, all except one. LeBlanc&#146;s loneliness is palpable. She dances out her grief before resolving it in her own, somewhat surprising, way.

Wheeldon, a former New York City Ballet dancer who has been called a possible successor to Kenneth MacMillan and Frederick Ashton, set this ballet on the San Francisco company a year ago. His bent for the classic romantic genre shows in &#147;Sea Pictures&#148; and presages more good things in the years to come.

If Wheeldon and van Manen gave this program a look to the future, Helgi Tomasson seemed to be looking back. His Prism, which closed the program, may not be exactly an homage to his mentor, George Balanchine, but it certainly recalls the late master&#146;s style. Made earlier this year for the New York City Ballet, where Tomasson spent most of his dancing career before coming to head up the San Francisco Ballet in 1985, Prism has the spare look and style of a Balanchine NYCB work.

Set to Beethoven&#146;s Piano Concerto No. 1 (which was ably performed by the orchestra under Emil de Cou with soloist Roy Bogas) it echoes Balanchine&#146;s predilection for the arabesque and the long line. The first movement works in trios, two men and a woman or three men, dancing against a background of the corps. The second movement is a lyrical pas de deux, on opening night danced by Lucia Lacarra and Cyril Pierre. Tomasson varies the pattern in the finale, with a black-clad male dancer (Gonzalo Garcia) executing an extremely athletic solo against the pastel-clad company. Garcia was great, his elevation and precision impressive, making it all the more shocking when he slipped and fell running out for his curtain call.

Prism is a nice ballet but it says nothing we haven&#146;t heard before. Perhaps the letdown was simply a function of placement. &#147;Black Cake&#148; is a hard act to follow.