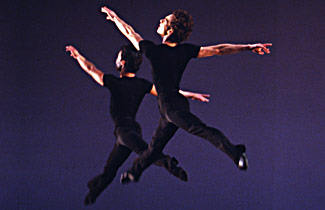 The San Francisco Ballet is wearing a review from last summer&#146;s successful tour to Europe as a new title back home. "One of the world&#146;s top ballet companies" wrote someone in the Times of London, so it must be so. The quotation is everywhere, on the front of the program, on the posters, the website. It&#146;s a little embarrassing that such an excellent organization would need to flap its wings so much, like movie producers vying to get noticed by the Academy. Better to just dance. Perhaps it&#146;s just a West Coast-based insecurity.

Helgi Tomasson has been at it for twenty years now. What he&#146;s actually done is raise a lot of money. The good news is, he knows how to spend it. This young-looking company is filled with an international cast of up-and-coming stars, first-rate production values, and a repertoire that is skillfully varied.

Program One of the 2005 season shows off, in one piece, what the San Francisco Ballet is up to, in terms of the dancing. After a couple of rather moderate offerings, the evening ends with Balanchine&#146;s Theme and Variations. On view is technique, star-power and practically the whole company working at full-bore, all in thirty minutes of Tchaikovsky&#146;s Suite No. 3 in G.

After so much hoopla last season in the year of Balanchine&#146;s 100th anniversary, it&#146;s satisfying to see a big Balanchine piece in a normal light. Here, with Lorena Feijoo as the regal prima ballerina and Vadim Solomakha, her confident partner, the pleasure is in watching some playful and fiendishly difficult dancing pulled off with near ease. Feijoo had moments where the fifth set of pirouette combinations had a shaky completion, but in general she knows how to lead a pack of tutus. Her bearing, attack and technical command earn her the place up front. Solomakha&#146;s partnering is almost soft-edged. There is never a moment where he pulls himself into the stiffness one sometimes sees the cavalier assume. His masculine counter to her lead is confident and relaxed, the physical effort nearly transparent.

When the entire corps takes the stage, there is the opportunity to admire what a band of individuals Tomasson has hired, many of them quite young. There are Thai, Chinese, Cuban, Spanish, English, French and American dancers, and every one of them is strongly trained in a slightly varied manner. There is no cookie-cutter uniformity, even in the shape and size of the dancers (Bret Bauer towers in the male corps at 6&#146;2" while many of the other men are a more standard 5&#146;8").

Tomasson&#146;s corps and company is a kind of casting theme and variation. And to see all this dissimilarity dancing in perfect unison (and these dancers can do unison, down to the height of every leg in every leap and arabesque and the placement of the hands) is quite remarkable. The San Francisco Ballet is some kind of metaphor for world harmony that never gets lived-out in the political arena.

The program opener, 7 for Eight, Tomasson&#146;s own 2004 exploration of Bach, has some lovely moments, particularly in the expression of clarity and presence by Yuan Yuan Tan and Yuri Possokhov, who seem to be the heart of the piece. Having Balanchine as the other bookend to Tomasson on the program, however, shows off the director&#146;s choreographic shortcomings. Somehow Mr. B was always able to create spatial interest as well as surprising uses of the classical vocabulary at practically every moment, while Tomasson seems more concerned with steps than space, and spends many passages of the colder, more mathematical music of Bach sending his dancers into flights of less inspired choreography. Although Mr. T is no Mr. B, he does manage particularly well, when choreographing for men (whom Balanchine basically ignored, artistically), to delve into new frontiers. With this group of outstanding danseurs, it would be interesting to see even more of a shift from traditional dominance of the toe-shoed gender in future Tomasson works.

"…smile with my heart," a Lar Lubovitch piece originally set on American Ballet Theatre in 2002, is basically a lovely duet to Richard Rogers&#146; "My Funny Valentine" expanded into a longer work, without the same artistic inspiration. The central duet, performed by Tina leBlanc and Stephen Legate is just right, with the bittersweet song played by a small group of instrumentalists onstage, lead by pianist Michael McGraw. The rest of the piece lacks focus, particularly in the opening, and the fault can clearly be laid on the musical score. Lubovitch commissioned composer Marvin Laird to create music, "in the style of" Richard Rogers, and the result is a murky, meandering, minor mess with occasional melodic reminders from the Rogers songbook. How much clearer the choreography could have been if every section had offered, like the "My Funny Valentine" duet, much more lyricism and less abstraction. This is Musical Comedy, not a time for Avant Garde.

In the two other featured duets, one angry, one light, Katita Waldo and Damian Smith used the floor and created real tension with a minimum of phony ballet angst in the former, while Frances Chung, mysteriously plucked from the corps to dance with Gonzalo Garcia in the later, looked perky but out of her league.

(15874)
$3.88 (as of January 23, 2021 - More infoProduct prices and availability are accurate as of the date/time indicated and are subject to change. Any price and availability information displayed on [relevant Amazon Site(s), as applicable] at the time of purchase will apply to the purchase of this product.)
related posts