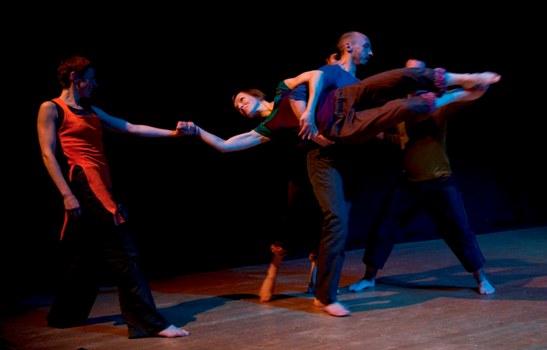 SFIAF brought no fewer than five companies together as a finale to the festival on May 19, 2012. What a marathon! There were familiar San Francisco dancers as well as unique visitors from Switzerland, Finland, The Netherlands and Estonia.

Cie 7273, (the years of the performers’ birth), consisting of Nicolas Cantilion and Laurence Yadi, presented the marvelous American guitar virtuoso, Sir Richard Bishop, and the dancer Nicolas Cantilion, in “Listen and Watch.” Yadi was not there. For 35 minutes Cantilion moved “a succession of emblematic images taken from dance, sport and politics.” This virtuoso solo was intriguing, since the dancer stayed in one place, constantly rotating, adding and eliminating gestures. Although the program suggests that the same phrase is never repeated, the work felt rhythmically repetitious and consistently introspective. Bishop’s playing, a long guitar drone, was superb.

Leyya Mona Tawil, a local dancer, collaborated with Lars J. Brouwer, a Dutch composer, to give us “Thieves,” a duet for Jermiah Crank and Isabelle Sjahsam. The dancers moved in mysterious lighting, across the stage and back, approaching and retreating stage on some seemingly strange errand. After a very slow and secretive set of these advance/retreat activities, the dance grew livelier, the dancers interacting with the sounds generated by the musician. “Thieves” was one of the best works Tawil has given Bay Area audiences. An unnamed lighting designer deserves credit for his evocative design.

Cid Pearlman is a well-known SF dancer. She has been working in Estonia and for “This Is What We Do in Winter,” in which she brought together American and Estonian dancers who had worked together “on the process of getting to know each other during the long, dark Estonian winter.” The piece was a refreshing mixture of folk dance idioms and contact improvisation. Getting “to know one another” seemed to include the now too-much-seen-and-used set of lifts, carries, falls and tumbles seen by contemporary dance companies. This group was less technical in its approach and seemed to enjoy each other mightily.
The dancers were: David King, Tiina Molder, Helen Reitsnik, Alexis Steeves, and Rain Saukas. Jonathan Segal provided the music.

As it approached and then passed 10 p.m., the audiences took a deep breath and faced the last two events. Post-Ballet, with choreography by Robert Dekkers, offered “Mine Is Yours,” attempting “an inquiry into American society’s perspective on sharing and community, especially where relationships and sexuality are concerned.” What we saw was an extremely tall man dressed in a long skirt, Domico Luciano, beset by three small women, Ashley Flaner, Raychel Weiner, and Hiromi Yamazaki, who besieged him, conspiring together to jump, roll, assault and generally attack him. In turn, he lifted and carried them, sometimes accepting but generally rejecting their advances. This work (as is stated in the program) supposedly questions “monogamy, sexual orientation, family dynamics, infidelity and marriage.” Further research on these subjects and their possible choreographic evidence is surely needed. The work is superficial.

And finally, we saw the Susanna Leinonen Company in “Chinese Objects” (2005, in its U.S. premiere here). With music by Kasperi Laine, the dancers, Heidi Lehtoranta and Laura Lohi appeared in “robot like” costumes and executed some remarkable technical feats, only to return to the robot poses. It was unclear how this reflected “Chinese Objects,” but choreographer Susanna Leinonon seemed to find it so.
Had this work appeared earlier in the evening, it might have received greater attention and response. Skilled as it was, it was not appealing. The light design was by Hanna Kyhk: costume design by Erika Turunen.

Andrew Wood, director of SFIAF deserves many kudos for bringing so many and so varied a range of artists to San Francisco. Sometimes, however, less is more, particularly in the case of multiple dance events in one evening. We are enlightened, but overexposed.