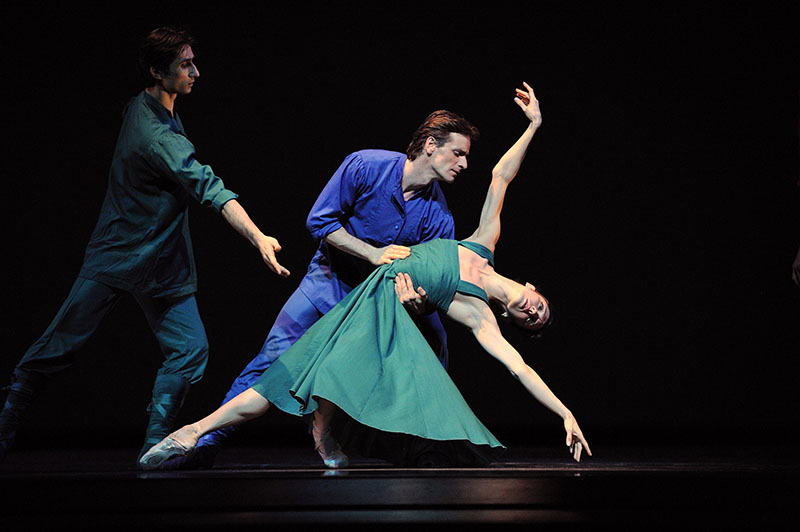 “She looks like Catwoman,” an observer at the ballet’s second performance of “Underskin” quipped. Indeed, the ballerina (Elana Altman at this performance) wore a shimmery black unitard cinched at the waist with a big-buckled belt, and she slinked around looking as if she might bare her claws at any moment. Her presence represented but one of many incongruities in Renato Zanella’s “Underskin,” a confusing, murky dance in its world premiere setting on San Francisco Ballet. Along with a thoroughly blasé revival of “Haffner Symphony” and a somewhat perkier “Russian Seasons” reprise from last year, this program signals a choppy recovery from the company’s mid-season slump (the tedious American premiere of John Neumeier’s “Little Mermaid”).

In the Zanella premiere, the dancers simply deserve better than what this freelance Italian choreographer gives them. “Underskin” pretends to be about the mysterious nature of the female soul. Set to Arnold Schönberg’s “Verklärte Nacht” (Transfigured Night)—whose string-tortured melodies (played with brisk efficiency by the orchestra under Martin West) may indeed evoke a veiled perspective on feminine feelings—the piece ends up a spaghetti of ideas and movement with no particular structure or rationale.

On a stage barely lit in cool blue (by David Finn), with a dozen tilted posts serving as a symbolic forest (designed by Anne Marie Legenstein, who also created the futuristic-goth costumes), we see a number of weird groupings in which the women all struggle or run away from their tormenting partners, interspersed with the contorted squirmings of the aforementioned Catwoman (Altman, with Sofiane Sylve at alternating performances). At one point, the bare-chested men—some with metallic armbands, others with straps criss-crossing their torsos—enter and perform what look like slow-mo calisthenics, followed by a pas de deux (soulfully danced by the hard-working Yuan Yuan Tan paired with an obliging Anthony Spaulding). How these disparate parts form a unified whole remains unresolved, but that appears to be of no concern to Zanella, who simply wants this piece to be about emotions (“intense enough that you recognize them yourself,” he says in a particularly inane comment in the program notes—which means that he doesn’t have a clue either).

The dance concludes with a visual cliché, red confetti raining down on Tan as the corps assembles upstage, their backs to the audience, among the now-upright posts of the forest. The gimmick telegraphs nothing more than a slapdash finish by a choreographer with a deadline—the final attenuating notes of Schönberg’s score. As such, it’s a good metaphor for the question mark or shrug with which this new work will be greeted.

It would be just as easy to dismiss Artistic Director Helgi Tomasson’s “Haffner Symphony” as something on the other end of the spectrum—a bit of formalized fluff, a work of obedient homage to his roots from a choreographer in his youth (Tomasson created it almost 20 years ago). As a member of New York City Ballet, he danced under George Balanchine, and this piece has the feel of one of Balanchine’s plotless dazzlers, very much in the mold of “Symphony in C” or “Theme and Variations” (the latter revived by SF Ballet earlier this season).

Tomasson created “Haffner Symphony” to Mozart’s eponymous work, known otherwise as Symphony No. 35 in D Major. The symmetrical geometry with which the choreographer has interpreted Mozart’s robust composition nicely shows how danceable it is, in a very Balanchine way. And that nice-and-easy route is the one the company takes in this by-the-numbers revival, executing the classical steps with military precision (if not gusto). The problem here is not so much the reverent nature of Tomasson’s creation nor its somewhat bridled interpretation, but that it never really reflects the score’s excitement and majesty. Mozart wanted the work to be performed “with fire,” and though the orchestra (again, thanks to conductor West) complies, the choreography comes off as tame, even tepid. Principals Vanessa Zahorian and Davit Karapetyan start off gallantly enough, but they too often disappear in the sameness of turns and bows. Karapetyan in particular seems happiest as a soloist, cutting smart grande pirouettes on his own but looking preoccupied when he takes Zahorian’s hand and positively bored during lifts. And though the corps becomes fairly lively in the final ensemble, the movement Tomasson gives them is as bloodless as Santo Loquasto’s turquoise scenery.

Warmer colors—and feelings—imbue the program’s last work, Alexei Ratmansky’s “Russian Seasons.” First performed by SF Ballet in April of last year (and staged this year by Yan Godovskiy), this long and rambling piece by the resident choreographer of American Ballet Theater also harks back to roots—in this case, a Russia long past, one where religion and the four seasons figured more prominently in the lives of everyday people. Ratmansky developed the ballet’s 12 scenes from a score by Leonid Desyatnikov, which includes five rather mournful songs for a mezzo-soprano who reminds those who understand Russian (regrettably, neither supertitles nor translation in the program is provided) that we are not long for this world, our short lives ending in the cold earth. Ratmansky plays on this theme with extensive use of the floor (as in dancers lying prone), a lot of folk-dance twists for the various couples (each color-coded, regrettably), and some contrived bits (including a ballerina “stone-stepping” on men’s thighs), but overall the piece looks and feels more fully realized than it did last year (when three performances were canceled due to illness among the 12 cast members, most of whom reprise their roles from a year ago).

The success is due largely to this ensemble of dancers, most of whom have grown into the piece in terms of familiarity as well as the requisite esprit de corps it demands. Look beyond the Crayon-colored costumes and silly pillbox hats (by Galina Solovyeva) and you’ll see a ballet about connections, missed and fulfilled, and the inevitability of death and loss contrasted with the exuberance of youth and love and yearning. Yuan Yuan Tan, representing the orange/white figure of loss, is heartbreaking in her expressive mourning. Sofiane Sylve, as the ballerina in red, has a number of bravura solos, all of which she manages with serene poise; on the other end of the spectrum, however, Lorena Feijoo tears about, in danger of becoming arch in her over-eager interpretations. Among the men, Pascal Molat gives the athletic dances a meticulous polish, and James Sofranko, stepping in at the last minute, proves that this company embodies nothing if not teamwork.