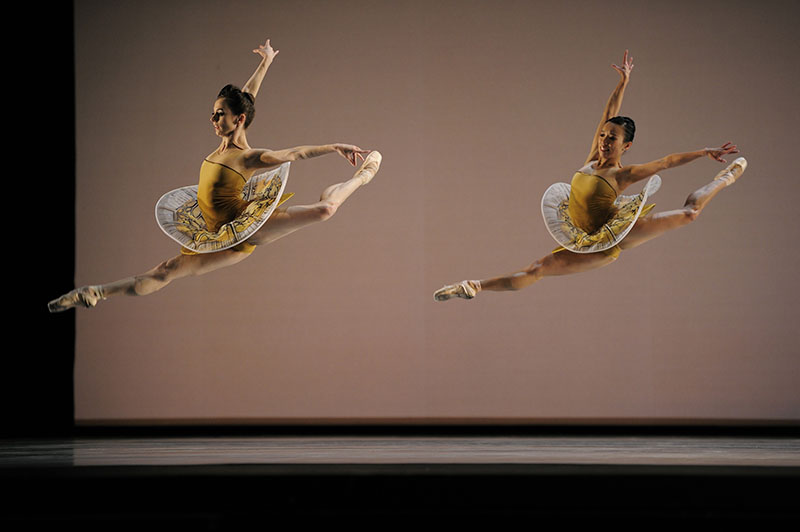 Dancemakers, like all artists, create best when they work from the familiar. Yuri Possokhov, choreographer in residence for San Francisco Ballet, has learned (after an extended period of trial and error) the importance of this lesson. If he has made only one really good ballet to date, it is likely “Classical Symphony.”

Possokhov’s latest, which premiered in the middle of this program, marks an unabashed return to his past, to the sumptuous presentation and dancing style of the Bolshoi, where he trained as a young dancer, working under Peter Pestov, to whom this dance is a tribute. That it succeeds on so many levels demonstrates that it is more than a nostalgic homage to an old master. “Classical Symphony” is a rich and thoroughly entertaining surprise, incorporating elements not only from Possokhov’s rigorous education but also the edgy experimentation he has tried, with varying degrees of success, throughout his prime. He has, in short, come into his own.

Like Sergei Prokofiev’s Symphony No. 1 in D Major, to which Possokhov has set this piece and whose sobriquet he also borrows, this dance has structure, momentum, and a beautiful harmony. “Classical Symphony” opens with a projected outline of some grand hall (the Bolshoi foyer?), which fades after the last chandelier comes into view, a theme repeated in each movement. Warmly lit (by David Finn) in gold light, the stage fills with ballerinas in saucer-like ocher tutus and men in black waistjackets (effective costumes by Sandra Woodall). Possokhov manages the flow of dancers expertly, creating intriguing patterns in their entrances and exits that superbly echo the rising and falling themes in Prokofiev’s composition, particularly in the expansive grands jetés of the third movement gavotte, where Possokhov’s men indeed appear to soar like birds as he intended. Throughout, he weaves lovely ensemble moments with thrilling pas de deux—including three separate instances where the principal ballerina (Maria Kochetkova on opening night) twirls around like a glass bottle from a squatted position, performing her pirouettes almost at floor level. There are also flashes of humor (as when a dancer seems to miss a cue and skedaddles offstage) and gentle sweetness (as in a pas deux when the courtly Jaime Garcia Castilla holds Kristin Long’s outstretched arms tenderly). And Hansuke Yamamoto shows himself to be not only a strong partner to Kotchekova, but also a soloist of growing confidence, and one to keep your eye on.

Barely a year after enduring a tepid response for his “Fusion” both at home in San Francisco and in New York (where one critic lumped it as a piece “so bad [it] made you want to cry”), Possokhov is once again basking in the kind of praise he got when he was still a principal dancer. Many in the audience leapt to their feet during the curtain call when he came on to take his bow. He deserved it. “After making this ballet, I thought that it won’t be my last with a classical vision,” he is quoted in the program. Let’s hope he sticks to that conviction.

“Rush,” by Christorpher Wheeldon, opened the program with a jolt. As in caffeine. This hyperkinetic piece, set to the late Czech composer Bohuslav Martinu’s “Sinfonietta La Jolla,” seems determined to set a new standard for presto. Originally set on the company in 2003 for the Edinburgh International Festival (and first seen in San Francisco in 2004), “Rush” remains as relentless as ever—a busy, breakneck race of movement not entirely indicated by the score. It’s hard to watch the dancers trying to execute the cascading gestures (poor Gennadi Nedvigin, master of Russian turnout, barely keeps up; during a lift, Frances Chung’s flowing skirt unintentionally draped over his head). This is competitive dancing of a very different sort, and the cast performs the poco allegro of the first movement as if they were being chased by an express train.

Fortunately, the second movement largo relaxes the tension, with the exquisite Katita Waldo, who will retire after these performances, looking quite perfect, her extension noble, her port de bras a marvel of fluidity. Damian Smith pays tribute by partnering her expertly. And although “Rush” finishes with another breathless allegro, Wheeldon cuts back on the sparks and speed, enabling the dancers to move with less frenetic dexterity and a more unified, neoclassical feel. Still, there’s a little too much gimmickry (including when a ballerina “scales” the torsos of two men genuflecting side by side before her). Though it may be just wishful thinking, “Rush” needs to slow down and tone it down, too.

“The Concert (or, the Perils of Everybody),” which ended the program, tilted along pretty much as expected: a delightful romp through an amazing array of Chopin works, most of which ache for a good comic turn. Jerome Robbins’s laugh-out-loud pastiche of styles and the various pretensions that engender them (staged here by Jean-Pierre Frohlich) looks sharp and polished on these dancers, all of whom appear to be champing at the bit to get some comic relief after a rather humorless season. And they get it, with Pascal Molat his hambone best as a cigar-chomping Husband, Elana Altman as his domineering Wife, and Vanessa Zahorian as the heedlessly egotistical Ballerina. The piece also gives members of the corps their moment in the sun, each doing his or her best to be at once enchanting and funny. Witness Danielle Santos, in horn-rimmed glasses, as a clueless wannabe muddling her way through a pas de six with Lucille Ball timing. The “Raindrop Prelude” had a humor-tinged poignancy, too, especially with Sean Orza’s lithe presence: he makes opening an umbrella look like a work of sublime physicality. As closers go, this “charade in one act” leaves you wanting more. Here’s to more fun and games in seasons to come.