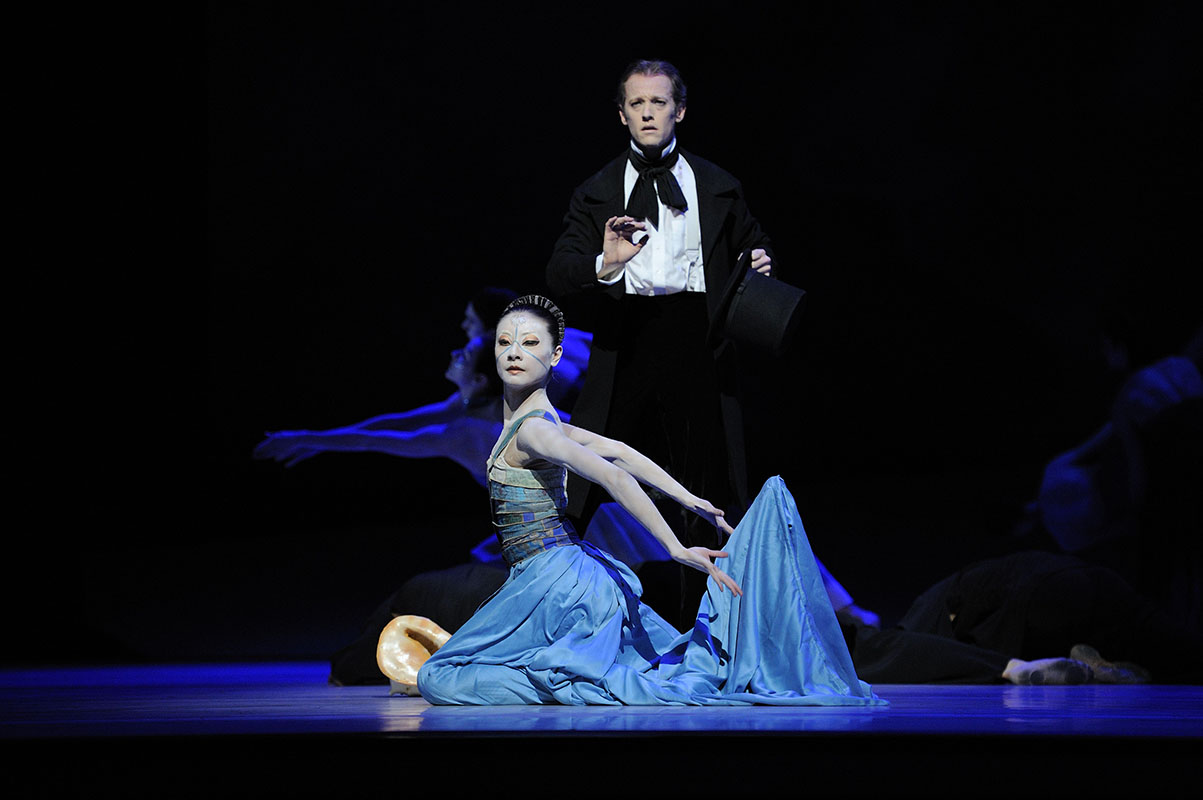 In case you wondered, Hans Christian Andersen had a thing for guys. That, it seems, is what choreographer John Neumeier wants you to know first and foremost in this U.S. premiere of “The Little Mermaid.” The American-born director of the Hamburg Ballet imposes his own curious take on the story of a mermaid who falls for a mortal prince, employing a heavy-handed contrivance (the “Poet,” an Andersen stand-in) who is in nearly every scene of this re-imagined fairy tale. The result weighs down what might have been a more universal exploration of obsessive love in favor of unrequited homoerotic attraction.

Not that such a thematic subterfuge should get in the way of a good show. Judged on theatricality alone, San Francisco Ballet’s “The Little Mermaid” stands as a marvel, an exalted exercise of stage wizardry in the service of storytelling. There’s a lot on display here, visually: a waving network of neon tubes evoking water, from stormy tempest to murky depths; sets that offer some of the most imaginative use of the big stage or confine the action to a claustrophobic box, depending on the scene; and lighting that gives a cinematic feel to the proceedings, making the action appear part movie, part dream.

Too bad, then, that this elaborate piece of dance theatre shortchanges the first part of that equation. Neumeier’s setting of the “Mermaid” story (to an inoffensive modern score by Russian composer Lera Auerbach, complete with theremin solos), conveys its themes less with fully expressive movement and more with rote gestures that hit the floor like rusty anchors. In one of the worst pantomimes, the Prince tweaks the nose of the Little Mermaid and then cuffs her chin lightly—a gesture that telegraphs his indifference to her lovesick entreaties. The device is used repeatedly, and it becomes an irksome shorthand for what should have been heartwrenching duets.

When he does actually choreograph, Neumeier, rather than simplify Andersen’s narrative, complicates it with lengthy ensemble numbers featuring hunky sailors and officers (“In the Navy,” anyone?) as well as the Mermaid’s Sisters and The Sea (corps members who act “watery”), along with protracted cruise-ship ballroom dances. These add little to the essential plot line, already brimming with what Neumeier has snagged in his wide net. (Warning: You’ll need to consult the program notes to sort his peculiar catch out.)

Then there are the costumes. Early on, we see the title character wearing what look like impossibly long bell-bottoms. These are the mermaid’s “fins,” and the diaphanous cloth is draped and pulled and arranged not by the ballerina herself but by a trio of black-clad handlers (dubbed “Magic Shadows”) who also lift and manipulate the Little Mermaid through a series of contortions that make her appear more like a puppet. When she finally moves about on her own, she must kick and snap the unwieldy leggings ahead of her, creating an unsightly distraction (not to mention a hazard for the dancer). In the drawn-out scene when she is turned into a human (more clinical than evocative, with her fins stripped away to reveal legs), she is fitted with a schoolgirl’s frock straight from Martha Graham’s “Appalachian Spring.” Elsewhere, the garb and dresses and uniforms jolt the eyes with saturated colors that beg for some justification or, in the case of the Sea Witch (bedecked in swastika red, white and black), just make you roll your eyes.

Sarah Van Patten, one of the two titular mermaids for the nine-performance run (the other being Yuan Yuan Tan), is under any circumstances brilliant onstage. When she moves, she has that fluid alacrity that Balanchine ordered, and she can meld both technique and characterization in her interpretation of a role. Here, however, she is somewhat under-presented, and that’s another minus in this production. Instead of giving her moments to whirl across the stage in a dazzling frenzy, Neumeier sets her adrift on the peripheries and assigns her fey bits to do with her hands and arms, which look like voguing, rendering her madness more like dementia. She also cranes her otherwise beautiful, long neck in a way that becomes visually tiresome (not to mention exhausting for Van Patten). Her one tour de force is when, newly transformed from mermaid to human, she must convey the strangeness of her legs. It is an unseemly spectacle, watching an accomplished ballerina pretend she is unfamiliar with her most essential limbs, and yet Van Patten carries it off believably, almost tragically.

The other cast members do their best with limited steps as well. Pierre-François Vilanoba performs the Prince as best he can (as with the other leads, the role is double cast, with Tiit Helimets alternating). Much of Vilanoba’s movement seems constrained, given that he must also act as an alter-ego for real-life Edvard, for whom the Poet holds the aforementioned affection. (Got that?) Vilanoba makes the best of it, partnering well with Van Patten and becoming an even better romantic lead when he cuts loose with the Princess/Henriette (Vanessa Zahorian), revealing his love for the girl he assumes saved him from the sea. For her part, Zahorian blazes through the role smiling and pert while executing dozens of difficult piqués. Even Damian Smith, who must enact most of Neumeier’s weird “between-the-lines” plot machinations, does so with a fool-for-love pathos. Only Garen Scribner, as the Sea Witch, makes his part bigger than it needs to be, especially in a too-long dagger scene with Van Patten.

But these dancers cannot be faulted for any lack of diligence and sincerity. Consummate professionals, they devote themselves entirely to Neumeier’s vision for this work, confusing and encumbered as it often becomes. It thus represents a double salvation as this overly long ballet resolves in the apotheosis of the Poet and Little Mermaid (now called “His Creation”—get it?). Liberated from their human guises, they float into the stars. Beholding Van Patten and Smith, the one standing before the other in statuesque stillness, you realize that it is really their moment—as well as that of all the dancers—to shine.