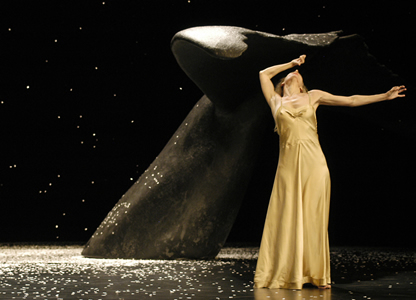 I first witnessed a Pina Bausch dance on a grainy TV in a cheap London hotel, where a flip through the channels stopped me with a scene that could have been reenacted last week, on stage in Berkeley, where her dance company was walking around in evening clothes, just like they did 30 years ago, doing their mostly pedestrian “Tanztheater” thing, totally mesmerizing me.

I think the reason I like her work so much has to do with the deadpan appeal of it, its vignette structure–where if this bit doesn’t grab you, the next bit might—and the emphasis on a sensual, adult, romantic world that is urbane and earthy at the same time. “Ten Chi”, which the company brought through Cal Performances on tour, is part of Bausch’s recent series of place-oriented works. Place, in this case, refers to Japan, although this is Bauschland through and through.

For three hours, Bausch sends a cast of quirky performers through a non-sequitorial world that takes place on a mostly blackened stage which also included a huge whale’s tail and snow, (or perhaps cherry blossoms), raining down on the proceedings for two hours. It could have been the “Nutcracker”. Not.

Bausch’s dancers are angular and/or meaty, wild movers and/or actors, comedians and/or performance artists. One deep-voiced woman sounds like a German Lauren Bacall, another performer, a middle-aged man, asks of the audience members in the first row if they can snore, and then demonstrates, over and over. There was so much tossed long hair and working of the negligee-like dresses by the women that I thought I was trapped in a Martha Graham-museum for awhile—which doesn’t upset me in the least. These women are slinkier than Graham’s, there are wavy arm gestures used as the impetus for movement, not a gut-wrenching contract-release-kind-of-thing. The men of the company occasionally engaged in gestures that sent them off into wildness—they were always coming untucked, shirttails flying, jackets askew. There were actorly asides, laughs earned by slow stares, and a woven-together musical score (by Mathias Burker, and Andreas Eisenschneider) that was rhythmic and new agey when it wasn’t getting song-like, late-night, sexy.

While American modern dance has begun to look stodgy and old-fashioned when it insists on emphasizing movement, dance technique and musicality, Bausch has been offering works since 1974 that demonstrate the sly, sincere artistry that is real-world in its naturalism, but as breathtakingly able to dance and create images as any ballet company anywhere. “Ten Chi” was long—almost three hours with intermission—but I felt happily lossed in a world that is wise, wise-cracking and involving and I could have stayed hours longer.

Seeing ABT in San Francisco on tour was a little like scoring tickets to a Yankees game—you get a chance to see what all the money can buy, and compare notes with the home team. While traveling with an abridged company, ABT nevertheless paraded out a dozen of its stars (which is, after all, what the company is known for) and local balletomanes had a field day watching them in action. I attended Program B, missing the classical emphasis of the first program (“Ballo della Regina”, “The Sleeping Beauty: Rose Adagio”, “Le Corsaire (Pas de Deux)”, “Fancy Free”). I chose to take part in the Twyla Tharp orgy that happened all month at UC Berkeley, as the Joffrey, Miami City and ABT all hit town with Tharp pieces to show. (If only there had been time to attend all the lectures and watch all the movies being shown. ) I saw Tharp’s “Sinatra Suite” and “Baker’s Dozen”, and then two West Coast Premieres: “C to C. (Close to Chuck)” Jorma Elo’s tribute to the work of photomuralist Chuck Close, and Benjamin Millepied’s piece to original music by Nico Muhly, “From Here on Out”.

First, the dancers: Gillian Murphy, Paloma Herrera, Julie Kent, Misty Copeland, Kristi Boone, Marcelo Gomes, Herman Cornejo, Sasha Radetsky. These were names I had only read about until now, and what I came away with in comparison to the mighty band at San Francisco Ballet, is how strong the New York team is in veteran females. San Francisco seems particularly young, full of up-and-comers, but ABT had so many ballerinas seemingly at their peak, it was a different ambience. A ballerina lasts into her early 40’s if she’s lucky, but by the time she is in her late 30’s, there is a period where wisdom and experience blend with joy and bittersweetness, to create, on the right bodies, something sublime. This sense of ripe, candid, clear-eyed physical embodiment was in evidence in a big way in Berkeley. I’ll never forget it.

Finnish choreographer Jorma Elo created his new ballet, “C. to C. (Close to Chuck)” inspired by the Phillip Glass piano piece, “A Musical Portrait of Chuck Close”. Changing backdrops offered reminders of the artistic contribution of Close, whose huge digitized-style talking heads portraits are instantly recognizeable even if the name, ‘Close’ isn’t, but it was Close’s real-life story of triumph over physical disabilities, that offered narrative force to the work, even if it was all an abstraction. Here are some phrases I jotted in my notebook in the dark:

The Twyla Tharp pieces seemed light and nostalgic, “Baker’s Dozen” a good example of flouncy Tharp, featuring a cast of 12 which covered every inch of the stage without looking at all triumphant. The music, blues by Willie “The Lion” Smith were themselves of an earlier, seemingly more happy-go-lucky period, now Tharp’s 1979 piece has a double nostalgia to it. Cutting edge Tharp is now looking quaint. Time passes.

Also on the program were “Sinatra Suite”, the pas de deux reconfiguring of her group piece to the same music was well performed by Luciana Paris and Marcelo Gomes (I love it when the Latin movie idol danseurs like Gomes get all sweaty and disheveled in the course of one dance, princes turned workers), but I prefer the bigger, longer version of the piece because of the many sides of sex that various couples can bring, the shadings you get with different bodies, the way Sinatra gets caressed.

“From Here on Out” brought out an orchestra (Berkeley Symphony) to play the original music by Nico Muhly. The music had shimmering passages, moody, sonorous sections, and an amorphous quality that did not help bring out the best in the choreographer. Millepied, a relatively young dancer-turned-choreographer creates workable assignments for the cast of ten, but the movement never transcends.

(2393)
$15.97 (as of January 21, 2021 - More infoProduct prices and availability are accurate as of the date/time indicated and are subject to change. Any price and availability information displayed on [relevant Amazon Site(s), as applicable] at the time of purchase will apply to the purchase of this product.)
related posts