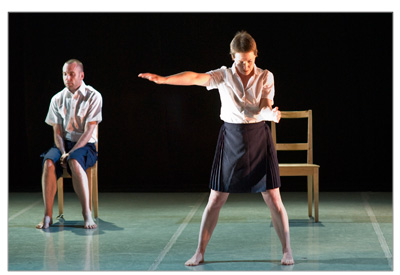 Todd Eckert and Nol Simonse offered five works on this program shared by the two choreographers. There was a premiere of Simonse’s work-in-progress, “Up Too Late,” and a repeat showing (somewhat revised) of last year’s “Etudes in Detention.” Simonse’s theater-dance works were the hits of the evening. Eckert’s dances were pleasantly lyrical.

Eckert’s first number was “Parallel Lives,” a duet for him and Kai Medeiros. It is a strong partner piece, the dancers echoing each other’s movement, coming close and moving away. The vocabulary for this and Eckert’s other works on the program consists of strong arm swings, one-legged falls to the floor, partner entwining and the much-used contemporary vocabulary of lifts, body contact and balances. For this viewer, that vocabulary tends to carry the same dynamic: a low to middle level of energy that never varies. Rhythmically it grows dull. “Parallel Lives” was the strongest, clearest use of this material. The men projected well.

Sadly that was not true for the two works Eckert made for the women. “Not a Through Street,” to a commissioned score (“Ji”) by Dohi Moon, it involved five women in similar swings, twists and falls.
Although there were several interesting spatial groups (twAlisa Dillon-Ogden, Norma Fong, Caitlin Kolb, Emma Salmon and Megan Wright,o against three, two, two and one) the piece went on and on and on. The dancers, performed well, but their contact with the audience needs improvement. Eckert’s third piece, “Cascade,” with three of the same five dancers (Dillon-Ogden, Salmon, Wright) gave us much of the same. Wright’s ballet training was clearly visible. These are good dances, but they need dynamic variation and focus.

Someday we will be privileged to have a whole evening of Simonse’s work. He is a master of theater-dance. “Up Too Late” is a take on a “Kafka Sex Party” in progress. As actor-dancers, Tanya Bello as the Drag-on Lady, Laura Bernasconi as Nurse It’s Cracky and Marina Fukushima as Shiny Metal Carpet Monster all gave us shape and character in movement and intention that was hilarious. We need humor in dance and Simonse as Greg-or certainly gives it to us.

It is a treat to re-view “Etudes in Detention,” Simonse’s 2011 piece with the accomplished Christy Funsch. “Etudes” was nominated for an Izzie last year; it deserves multiple viewing and more awards. Through several scenes, Simonse and Funsch portray two young people stuck in detention (or another minimal setting) who, step by step, move across to release, through sequences that are sometimes sentimental, sometimes wistful and often hilarious. It is emotionally tender when the two take time to discover touching postures on the floor. It is wonderful when a stepladder becomes the center pole for circus banners and the dancers careen wildly through space.

Simonse and Funsch have a range of movement skill that is truly amazing and pleasing whether it is minimum, maximum or minute. We look forward to seeing “Etudes” again on a forthcoming Simonse evening.

Lighting for the performance was well done by Harry Rubeck.