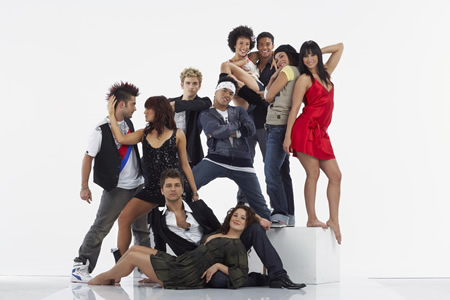 8,000 screaming girls. No, not a Hannah Montana concert; I am talking about the So You Think You Can Dance Live Tour, which rolled into Houston for one night only after selling out in hours when the tickets went on sale in August. The SYTYCD’s top ten, plus a few extras, put on a high-octane performance, featuring the greatest choreographic hits from the Fox television show. Imagine kids screaming for their favorite dances like their favorite tunes—now that’s a first for dance. Sure, the show is fun and helped to get a dance buzz going like never before, but dance is meant to be experienced live. That fact is reason alone to put the show on the road, that and giving a chance for those fans to see their favorite dancers in the flesh.

The show is as much about the personality of the dancers as their talents, and they let some of that leak through in the filler chat. Organized like a talent show, the in-between material was gathered from touching and silly memories of their time together, with plenty of “give it up for so and so.” A video montage introduced each dancer, followed by one of those blink and you have missed it solos. With the most talented group thus far in the show’s three-year history, the choreographers had no shortage of technique to work with and the tour organizers did a fine job gleaning the best material from the show.

Neil Haskell, this season’s heartthrob, showed up in top form. With his chiseled features, shock of yellow hair, and megawatt smile, he’s a charismatic performer, and is bound to be a face we will continue to see, whether on stage or screen. His acrobatic skills never fail to spice up the proceedings and add that wow factor. Haskell excels in character roles, and nearly drove the crowd into a frenzy in his famous table dance with Johnson, choreographed by Mandy Moore. Haskell and Johnson’s Pase Doble was yet another crowd favorite. Wait a minute, just about everything the troupe did was a favorite; that’s the exact idea of the live show.

Tidwell, formerly of American Ballet Theatre and Complexions, is by far the most highly trained dancer the show has ever seen. Tidwell, although hardly challenged in this material, brought out his best in his brief but effecting solo. He’s lovely to watch, regardless of the genre. It’s rare to see dancing of his caliber on a commercial show. Dance fans expect big things from this young man. Stan tuned on Tidwell.

The rest of the crew looked polished as ever, and what fun to finally see these dancers do what they are good at for a change. In a surprisingly unfussy set, SYTYCD Live show let dance be just what it is, all about movement. Back to the screaming. Keep it up girls, dance needs all the enthusiasm you can muster and then some. Buzz on!