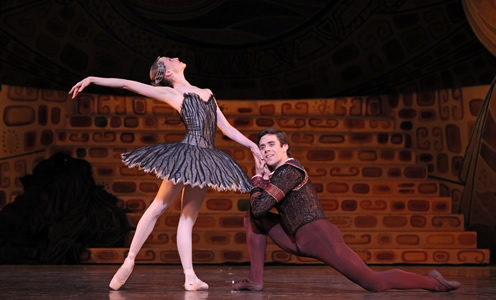 There’s nothing quite like finding out your girlfriend’s day job is being a swan. Siegfried and Odette, in Stanton Welch’s Swan Lake, have the ultimate “it’s complicated” situation, making the trauma of their doomed love the central nexus for his ballet.

Choreographers have been putting their individual stamp on Swan Lake since it premiered at the Bolshoi Theater in Moscow in 1877. The ballet was a notorious flop; still, a long line of choreographers have wanted to dance in their own lake. Houston Ballet is already on their third version. All that said, Welch’s 2006 version, inspired by Pre-Raphaelite painter John William Waterhouse’s 1888 painting The Lady of Shalott, updates the story, bringing it more into the realm of the fantastic, with surreal settings and glittery costumes by the late Kristian Fredrikson, and highlighting a love affair with a strong emotional center. Here, our prince meets Odette as a maiden, so there’s a certain rhythm to the various transformations from human to swan back to human. Welch also plays with the structure of the ballet, giving Act I and II some rousing new dancing by the various princesses and the sea of men, known as the prince’s friends or various guards. There’s some re-conceiving of Rothbart and his band of glamorous hawk-like swans. Rothbart, equal parts reptile, bat and Darth Vader, is one dark villain, so it follows that he should have a gang of sexy black swans in glittery tutus to keep him company.

Whether you like the updates or long for more tradition, the dancing is what keeps you glued to your seat. Sara Webb concludes her stunning season with a riveting performance as Odette/Odile. Her subtle grace bestows Odette with a contemplative edge. Webb takes a demure approach, allowing a tenderness in her relationship to Siegfried. She’s all air in Act I, almost watery in her fluid torso and liquid arms. As Odile, Webb stretches her wings in Black Swan, letting her bravura come out full force. Connor Walsh has grown in maturity since his last Siegfried. He’s more confident, assured, and well, princely. Walsh and Webb also demonstrate a chemistry that has been a few years in the making, giving added heart to their performance.

Other stand outs include Joseph Walsh as one of the Prince’s friends. Walsh has had a great season and is most certainly one to watch. The always elegant Barbara Bears is a portrait of coy restraint as the Princess of Russia. When Bears dances, it’s not only about what she does, but what she withholds. It’s quite magical and never fails to galvanize the audience’s attention. Whether it’s a turn of her chin or the flip of a wrist, she captivates. Jaquel Andrews gives the Princess of Spain an ample dose of flash and sass. Kelly Myernick’s Princess of Hungary emphasizes old world Slavic charm. Emily Bowen’s lively performance as the Princesses of Naples succeeds in its precision and quick-footed vitality. Nicholas Leschke holds the stage with the presence of a true fantasy villain, creepy and enticing. Even the red-eyed dragon seemed to be more comfortable in his scaly skin.

Fredrickson’s sets and costumes conjure an otherworldly atmosphere. Lacy white trees in Act I tell us we are in a magical realm, while the art deco ballroom recall the paintings of Gustav Klimt. Jewel-toned costumes, rich with iridescent and shimmery fabrics, add yet another striking layer. Houston Ballet ensemble danced with noted precision and authority. Martin West conducted the Houston Ballet Orchestra in a crisp performance.