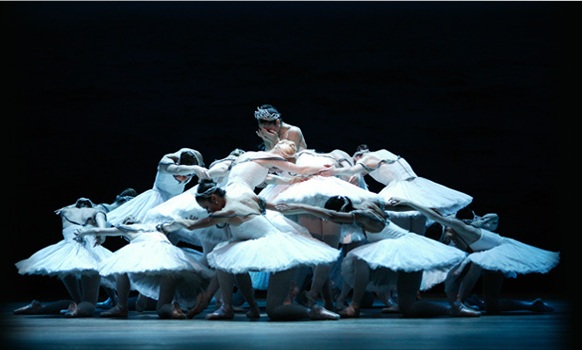 Pennsylvania Ballet’s “Swan Lake,” choreographed by Christopher Wheeldon, is the hot classical revival that has enjoyed an almost sold-out run at the Academy of Music. Wheeldon’s weaves his chunks of choreography into the minted ballet classicism of Marius Petipa–Lev Ivanov and the combination has proved a golden swan for PAB since its first appearance at the Edinburgh Festival in 2004. The ballet also is basking in the glow of the hit film “Black Swan” that features several members of PB corps de ballet, lending authenticity to the dance sequences, if not the psychosexual drama.

On the Academy stage there are no crazed ballerinas in Wheeldon’s adaptation, just dancers in a traveling ballet company rehearsing “Swan Lake” in the 19th-century Paris of Edgar Degas. The opening tableau has the ensemble in exact friezes from the painter’s famous backstage paintings.

The first two acts played without pause and this long section with studio shenanigans and visual exposé of a dancer’s life has charm. But the scenario runs out of steam. As danced in the March 5 performance, the pacing was static and composition looked haphazard. Even with an at-ease rehearsal setting, where class correction is built into the dancing, for instance, it had the look of dancing amok, with focus hazy.

Most telling were atypically wobbly corps women, in muddy unison lines, trying to gear up for the fantasy flock to come. The jump sequences with both men and women were off. The scene’s central pas de trois was danced with technical skill but read as cold, and it seemed to point up lack of choreographic invention by Wheeldon as the scene lumbered on. Coming to the rescue in Act II are the cygnets in their classic quartet twining, unaltered from the original choreography, and danced by Adrianna de Svastich, Laura Bowman, Abigail Mentzer and Ryoko Sadoshima with thrilling precision. The storyline becomes clearer as Zachary Hench, leading the men, is captivated by Siegfried’s crossbow and he goes into a trance as he imagines his own Swan story after class.

Act III was more pulled together, culminating in the appearance of the Black Swan, and showed both narrative drive and company esprit. Wheeldon keeps the divertissements integrated into the social scene and there is understated narrative thrust. Among the highlights is Amy Aldridge strip tease to scandalously modest bloomers. Aldridge flew through the line of stuffy men with taunting gypsy feet. Also stellar was the Pas de Quatre with its crisp allegro pace (and fine aerials) set by Jermel Johnson and Ian Hussey. Not to be outdone, they were joined by Mentzer and Kaia Annika Tack in sharp counterpoint pique sequences and pirouette runs.

The dual-role of Odette-Odile is cast with Lauren Fadeley, a corps dancer, for the evening performances and Brooke Moore, who just was promoted to soloist last year, for the matinees. The dancers have been featured the last two years, but in much smaller roles. This is their first shot at a career-defining lead.

Fadeley has the natural look of the White Swan ingénue, rolling it out with mature skill, which made her Black Swan vamp even more fiery and dramatic. But it was her attention to detail in the demanding pas de deux with Hench that showed she was owning it—Fadeley steps powerfully in her arabesques, holding beautiful lines, with authoritative extension work and strong port de bras.n other words, a star is born. Hench again showed his steeled and flowing partnering skills. He was also tossing off completely centered grand pirouettes and iron butterfly aerials. But more than his technical clarity, he convincingly put over all of Siegfried’s obsessive emotions.

The real capper though, aside from the two leads, was the corps de ballet, in the ending scenes completely on the money with all of the lakeside formations. The unison work was all sharp and supple fire points. These swans took flight at last. Great to see Meredith Rainey, retired PB soloist, in a star turn as the sneering, evil svengali Rothbart. Conductor Beatrice Jona Affron really spiked Tchaikovsky through the Academy (always a task) and was further highlighted by Luigi Mazzocchi’s masterful violin solo.