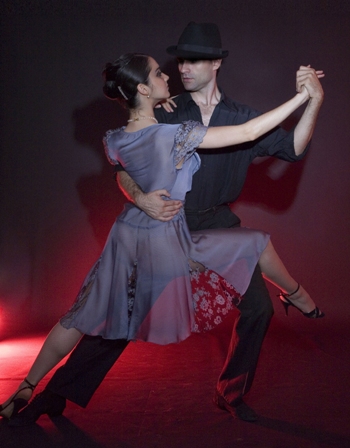 Tango Buenos Aires: The Fire and Passion of Tango

The dancers of Tango Buenos Aires have no problem with lead and follow—it is knowing when to stop that trips them up.

The company performed its program, “The Fire and Passion of Tango,” at Urbana’s Krannert Center for the Performing Arts. The set was composed of two halves, structured in a narrative arc that followed dancer Cynthia Avila’s romantic pursuit of Mauricio Celis, a taken man; despite her lusty ways, Avila returned to her initial partner, dancer Demián García, at the end of the show.

From her poorly executed contemporary dance solo early on to her drawn-out danced apology at the show’s close, Avila caked on the drama throughout the evening. Though her execution of the tango was strong, her overall performance was overshadowed by those of her fellow company members.

The first act highlighted couples in brief, well-characterized episodes. “The Romantic Couple,” Maria Lujan Leopardi and Esteban Simon, were the first to dance, in a gliding duet that emphasized clear foot placement and the freedom of Leopardi’s legs. “The Comic Couple” was third in the series, and was the most lighthearted section of the show; dancers Florencia Mendez and Pedro Zamín played to the audience, using physical comedy, facial expressions and ironic timing to solicit laughs. The final couple, Inés Cuesta and Mauricio Celis, was characterized by its passion; though the pair’s dancing displayed technical merit, Avila’s “drunken” grief in the background pulled focus away from it.

The evening’s second act did little to advance the plot of the story, and it began to feel redundant with regard to choreography; with the exception of a choreographed dance-fight for the men of the company, dancers were not highlighted in new physical feats. The musicians, however, were a different story.

In three moments labeled “solos by the orchestra,” the dancers took time to recognize the live five-man band, which was composed of a piano, a guitar, a violin, a double base and a bandoneόn (an accordion-like instrument). The fine acoustics of the Krannert Center’s Foellinger Great Hall gave the music an added level of sonority, allowing it to fill the space with a richness and warmth that was mirrored by the dancing.

And the crowd responded with warmth of its own: Tango Beunos Aires was met with a standing ovation at the close of its show. Even lengthiness is trumped by fire and passion, it seems.