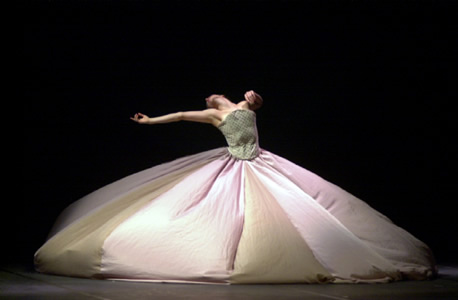 Society for the Performing Arts

Tania Pérez-Salas spins images to make dances. This is not to say her movement isn’t memorable; it is. But the take-home dreamscape of her work lies in its intense theatrical visual power. Trained completely in Mexico City, her influences include literature, the visual arts and the world around her.

In the three works she presented as part of the Society for the Performing Arts IW Marks Dance series she demonstrated a fusion of light, movement, and drama rooted in a deeply feminine sensibility. The Hours (2001), loosely inspired by Michael Cunningham’s novel of the same name and Alessandro Baricco’s Oceano, creates its impact in glimpses as if the viewer is peering in on an ongoing process. Rafael Mendoza’s lighting contained a breath pulse, delicately punctuating each section in well-paced rhythm. Each vignette is distinct—albeit some transitions are bumpy— yet the full effect feels whole. A woman lifts up her gigantic hoop skirt to reveal three more hooped-skirted women, connected by a swath of fabric that sets the reeling in various directions. This almost comical section contrasts with an old master drama of a two women being held by an animated crimson curtain, creating an illusion that the dancers were being both moved and supported by a sea of red. This scene conjured Michelangelo’s Pieta. Towards the end ropes descend; like an umbilicus the women cling, suspend, and struggle with that which confines and supports them. It’s just this kind of potent visual paradoxes that makes Pérez-Salas one to watch.

Anabiosis (2000), based more in movement than the other two pieces, revealed a more relentless erotic character. The dancing here takes on a furious pace, almost violent, while later on three naked women viewed from behind stacked in tight black cubes contort to Dave Seeman’s pulsing score. A particularly mysterious scene plays out in one of these suspended spaces where a woman lies naked (again from the back), while a man passes a mirror over her the front of the body. Is he showing us or her? Just how narcissistic is love anyway? Pérez-Salas, more interested in posing questions than giving us easy answers, riles us with scenes like this. Motivated by an essay on love by Octavio Paz (The Double Flame: Love and Eroticism), the piece showcased the troupe’s considerable technical skills, and demonstrated her finesse with a bold, earthy vocabulary.

It’s in The Waters of Forgetfulness (1998) that Pérez-Salas comes fully into her choreographic voice. Performing in a shallow pool of water, the dancers mingle, splash, drip, and merge with their liquid counterpart. The movement of water is as thoughtful as the dance itself. Flying water patterns amplifies every gesture of her intricate choreography. The message: we are in and of water. As exciting as splashing water can get, the gentleness of bodies simply lying in water, remained the most sensual signature of the piece.

Arresting images loom large in her dances, some like feel familiar while others speak to an under-the-surface mining of the collective imagination. Things we know, but don’t know how we know; that’s what ultimately drives this trio of compelling dances. A rhythmic soundscape, which continued during intermission and between pieces, kept audiences under her intoxicating spell.