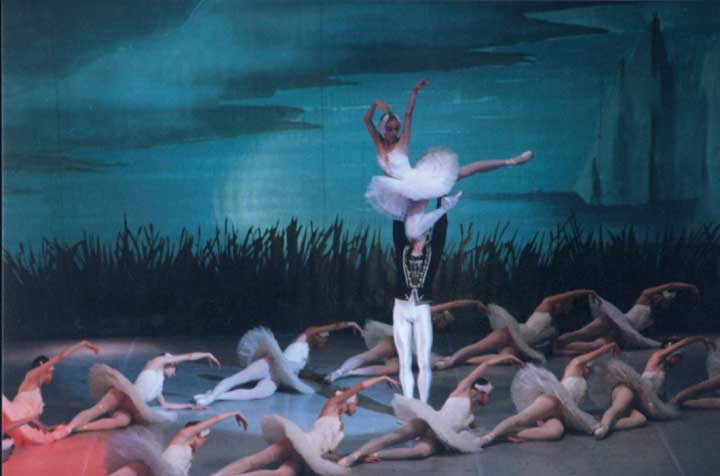 San Francisco has had a glut of Swan Lakes this season. The Tchaikovsky Perm Ballet, from Russia, brought a version by Natalia Makarova, ( the star/defector from the Kirov who danced for the American Ballet Theatre), to Zellerbach Hall, for a Cal Performances run April 6-9. Simultaneously, the hairy-chested version by Matthew Bourne was playing across the bay at the Orpheum in San Francisco. And a little earlier, San Francisco Ballet had opened its 2006 season with a Swan Lake by Helgi Tommason, the company director (and former NYCB principal dancer). It&#146;s been like choosing Nutcrackers in December.

Every Swan has its distinctions. Audiences probably care less about what has been tinkered with from the original Petipa/Ivanov version and more about whether the massing of the swans is glorious and transcendent enough to outweigh hours of party scenes and mime. Matthew Bourne&#146;s homoerotic, theatre-dance version exists in a different realm, altogether, but the scaled-down Tchaikovsky Perm version definitely stands-up on its own merits. It&#146;s super-romantic. A little gem.

Makarova, who was legendary for her ability to imbue her technically perfect ballet characterizations with a great amount of emotion and fervor, has fervently recreated that spirit using a stand-in for herself, the confident Natalia Moiseeva. Moiseeva&#146;s performance lacked contrast in her black swan role in Act 2, where she seemed dancey but not particularly seductive or menacing. Still, the luscious romantic nuances she added to every arch of the back and wilting arm gesture in Act 1, made her white swan memorable.

Although no one cares much about the narrative surrounding the festival of innocence and white embodied by the swan scenes in Act I, the dancer playing Prince Siegfried needs to earn at least a little empathy. Perm&#146;s Sergei Mershin looked young and schoolboyish, not the leading man-type usually cast. But the actual story of Swan Lake revolves around a young man who is on the brink of adulthood, being forced to choose a bride. The babyface works. In terms of dancing, however, star power came from the faithful servant, Benno, danced by Alexey Tyukov. Interestingly, Mershin and Tyukov alternate in the role. Perhaps the producers save Tyukov for New York and Los Angeles, giving young Mershin a chance to practice on the minor stages of Northern California and the like. In fact, Mershin was young and fine. He just didn&#146;t dazzle, at all, unlike Tyukov, whose role unfortunately hardly calls for dancing after the first half hour of the ballet.

Makarova&#146;s choreography, altered here and there from the original version, stood out in contrast to the blocky, wooden version offered a few weeks earlier at the Opera House by the San Francisco Ballet. Tommason, who is Northern European and danced in the technical masterpieces that were George Balanchine&#146;s, is not one for dripping high romance. San Francisco&#146;s version had nowhere near the emotional nuance and romanticism of the Tchaikovsky Perm, Makarova, et. al., version. In fact, the Russians looked considerably more comfortable on many levels than did the San Franciscans. Clearly, they dance this ballet over and over again, while the Americans had a two week run and quickly moved on to something else. There is no denying the incredible versatility and talent in San Francisco, but the dancers are never given the chance to sink into a role or ballet like other companies. A visit from a Russian troupe, even a minor company like Tchaikovsky Perm, is enough to remind you about passion. While some American dancers get caught up in their own dazzling virtuosity, the Russians simply want you to weep.