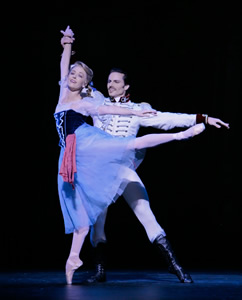 The Houston Ballet waltzed (literally) into their 39th season with most bubbly of ballets, The Merry Widow. How better to celebrate the eve of 40 than with a whole lot of on stage drinking. Franz Lehár’s charming 1905 operetta nicely transfers to ballet. The operetta made Lehár rich and famous, and it certainly boosted the career of British choreographer Ronald Hynd. He first set his Widow on the Australian Ballet back in 1975. If ballets could giggle this one would win the prize. It has gone on to be one of the most beloved romantic comedic ballets of all time, and currently graces the repertoire of American Ballet Theater, The National Ballet of Canada, and Pacific Northwest Ballet. And for good reason; it’s a gem of a ballet. Hynd keeps the action flowing in a seamless storytelling technique that flows as easily as a fine, dry, French champagne. There’s no tiresome variations to slow things down.

The story is perfectly preposterous. Pontevedro, a fictional Balkan country whose the national color is hot pink, the national dance is the waltz (except on peasant dress-up days, then its some kind of Slavic concoction), and the national drink is, without a doubt, champagne. Unfortunately, our tender little hamlet is out of cash. They place their future on keeping the fortunes of Hanna Glawari, the country’s richest widow, inside their borders, and hastily scheme to find a suitor for her. Trouble ensues when the selected gentleman, Count Danilo, has a past with our well-monied widow, never mind a touch of drinking problem. There’s some wonderful subplots going on as well, all too complicated to mention.

Barbara Bears made her entrance—decked in diamonds—on the grand stairway with all the panache of a Hollywood siren. Bears’ regal elegance and convincing wit proved a perfect match for Hanna’s mischievous escapades. Her maturity moved into full bloom in this role and showed off her remarkably dexterous acting skills. The way Bear’s plays it, one gets the feeling that she is in control of this high spending country’s future at all times. She carries off several dubious fashion choices with great panache, including a white feather boa that could very well have a pulse. Simon Ball danced the dreamy drunkard, Count Danilo, with suitable aplomb and strong comic flair. Ball is positively dashing as Danilo, even when he can barely stand up. You want to cheer for him, to get the girl, keep the money, and remember his AA meetings.

Melody Herrera is a charmer as Valencienne, the philandering Baron’s wife. Connor Walsh’s debonair Camille managed to woo Valencienne right out of the Baron’s hands with little resistance. Herrera takes girlishness to a new high with her delicate portrayal of the loosely moraled wife. Herrera and Walsh’s undeniable chemistry at the end of Act 2 makes for some of the most moving moments of the ballet. (Walsh was deservedly promoted to principal later that night.) The corps, strong with several new members, handles the invented Pontevedrain folk dances with considerable confidence and clean ensemble work. Imagine Arabic and Slavic dances with a touch of flamenco for good measure in a blender and you get an idea of Hynd’s creativity. Of course, they are wearing blazing pink.

The ballet is a veritable feast for the eyes thanks to the stunning sets and costumes of Italian designer Roberta Guidi de Bagno. No amount of sparkle is spared, simply everything in view twinkles. Judging from the looks of their Paris embassy and the glittery gowns of the townspeople, it’s no wonder Pondevedro went broke. Guidi de Bagna holds back nothing in her extravagant decors and captures a kind of film industry make believe glamor.

Lighting designer Randall G. Chiarelli baths the Parisian locales in a warm candlelight glow and added to the shimmer of an altogether enchanting evening. I predict that champagne sales and waltz lessons will be on the upswing for those in attendance. The morale of the story: keep your rich widows inside your country, everyone looks good in pink, and keep a good supply of the bubbly on hand should your finances go south. And when all is lost, there’s nothing like a good can-can to soothe your troubles. Without a doubt Houston Ballet launches its season with wink and a smile in this rosy production.