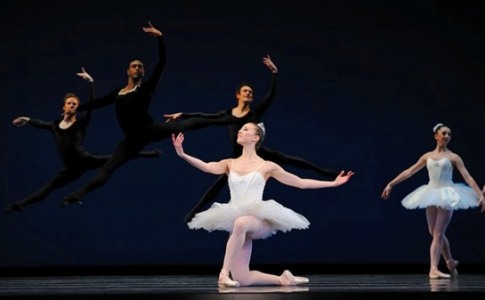 A marathon week of dance works were just presented under the auspices of West Wave, Dance Mission and the San Francisco Ballet. There was a mix of old and mostly new works, collaborations by local choreographers, presentations by new and never-been-seen here choreographers and ballet favorites out-of-doors at Stern Grove. San Francisco is a summer festival for dance audiences.

Every program offered something unusual. At the top of the list was “Terra Incognita, Revisited,” a collaborative work combining the skills of Manuelito Bing, Kara Davis, Katie Faulkner and Alex Ketley. Although the project began in 2009, the more recent event “aspires to realize new ways for choreographers to come together to develop and explore ideas.” The result was delightful. Dancers spoke about their concerns—e.g. “Let’s begin again,” and/or had fits about what came next or the collaborative process. Between comments, some excellent dance phrases were performed, once helped by the choreographer on stage (Davis), another later issuing orders from the house (Ketley). Dances conformed, gave their all; then they revolted, always presenting the work in a straight-faced, yet hilarious fashion. Kudos are due them all, but special note is to be made of Adam Peterson, Nik Korkos, Ailene Wadsmuth, Peiling Koo, Melinda LaVelle and Mo Miner. Others in the cast were Celine Alwlyn, Koyin Ecklin, Daniel Howerton, and Alex Jenkins.

The next special event was a duet at Dance Mission featuring the work of Christy Funsch and Nol Simonse, two dancers who have often performed in other local companies. Funsch and Simonse both have a special talent rare among today’s dancers: they are capable of presenting dramatic characterization while still retaining exceptional technical dance skills. In “Etudes in Detention” these talents emerged step by step as the two went through a series of “disintegrations”—from tensely formal solo phrases through a wild lyrical duet to a frenetic circus finish. Throughout the piece, the two were in constant contact and focus with one another, helping us to see their intentions, their skill and their humor. “Etudes in Detention” is an important new work. I hope Funsch and Simonse will build a future program around their own brilliant repertory.

Also on the program, choreographer Tanya Bello gave three pieces. Entitled “project b,” Bello’s four recent works were all beautifully danced, all closely tied to a musical structure (Arvo Pärt, Vivaldi and one nostalgic pop number, “I Can Dream, Can’t I?”)—all using large spatial patterns and sweeping gestures. Kelly Del Rosario was outstanding for his dance on a bench in “Souterrain.” Other dancers of note were Mayuko Hosoai and Norma Fong in “Triquetra” and “Moveable Feast 3.” Bello might edit her work, free it from the scores and thus make clear differences in the vocabulary for each, thereby producing more effective works. Other dancers in the company are Bethany Mitchell, Diana Broker and Dudley Flores.

The West Wave series, produced in its 20th year by Joan Lazarus, generously invited five “Nearly Out-of-Towners” to present choreographic offerings. The artists represented were Lisa Townsend (“Cherchez la femme”), Andrew Skeels (“Lydia’). Graham Lustig (“Infinatum”). Robert Dekkers (“Flutter) and Yolande Yorke-Edgell (City Limitless). Skeels’ “Lydia” was a trio dramatically illustrating efforts to contain the madness of a woman about to commit suicide. Lustig used a religious anthem for a duet featuring many, many lifts. Acrobatic activities were also featured in the wiggling men’s trio, “Flutter,” and Lisa Townsend talked her way through her love life. Some good humor ended the program with “City Limitless” employing “on the road” video and “beat” texts, but the intention of the piece was not always clear nor did it reflect the body image of that time. It is always valuable to see new works, but for this viewer the endless lifts and falls of contemporary dance vocabulary produce a boring dynamic, too much acrobatic activity and little wonder.

The San Francisco Ballet gives the city a free summer performance at Stern Grove, the lovely woodland park in the Sunset District. For the July 31 event, Artistic Director Helgi Tomasson brought the company’s trainees and apprentices in two works. The first, “Andante Sostenuto” to Schubert’s Piano Sonata No. 21, was choreographed by J. Francisco Martinez and challenged the young dancers with its timing, the three “pas de deux” and yes, the lifts. Young women appear to be stronger than the young men and partnering is a fine art. However there were excellent efforts by Francisco Mungamba and Elizabeth Powell as well as Lacy Escabar, Trygve Cumpston, Shion Yuasa and Henry Sidford. Next on the program, “Timepiece” choreographed by Myles Thatcher, was more comic and fun. Danced to a variety of pop sound and song, the group above were joined by Escabar, Ellen Rose Hummel, Lauren Parrott and Alexander Reneff-Olson to form a playful pas de dix that was skillfully executed.

The company itself achieved superb execution of Tomasson’s “7 for 8” to Bach’s Concerto No. 5 and an all-time favorite, Balanchine’s “Symphony in C,” to Bizet’s eponymous work. All the stars were there: Maria Kochetkova, Rubén Martín Cintas, Vanessa Zahorian, Gennadi Nedvigin, Jaime Garcia Castilla, and shining beautifully, Joan Boada. “7 for Eight” is one of Tomasson’s finest accomplishment for SF Ballet and it was beautiful to behold in the clear light of afternoon.

To bring the day to an exquisite finale, “Symphony in C” was a glorious dessert. The second movement, Allegretto moderato (after Gounoud) was brilliantly danced by Sofiane Sylve, partnered by Vito Mazzeo. Sylve was able to bring deep feeling tones through the difficult arabesques and back bends, finally completing the movement curved to the floor. Each section developed into the next, achieving a lyrical masterpiece. Other fine performances were given by Lorena Feijoo, Vitor Luiz, Frances Chung, Isaac Hernández, Nicole Ciapponi and Lonnie Weeks. The whole company is to be congratulated, however, for sustaining the many repeats that close Balanchine’s “Symphony.” Dancing out of doors, 48 dancers on a slippery stage giving their all, is an accomplishment that was heartily applauded. The audience stood, cheered, gathered picnic remains, baby strollers and discarded hats as they climbed back to the foggy streets of San Francisco.