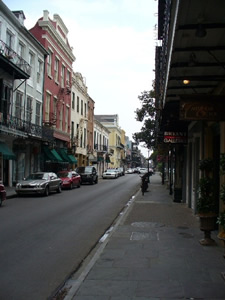 New Orleans, you had me on my first beignet, (not to be confused with any such concoction you might find in your hometown of the same name). When I told my friends I was heading to the big easy, the collective response was, “I can’t wait to hear how it’s changed.” At this point I need to confess that this was my first trip to this glorious city. I figured I should get there sooner rather than later. One left turn on I-10, an easy six-hour drive later, and I was in another world, the Big (and beautiful) Easy. The French Quarter, the Garden District, the Warehouse District, the Marigny, and more, are open and ready to wine, dine, and enchant.

My first stop was none other than the historic Hotel Monteleone, a New Orleans landmark, nested in the heart of the French Quarter. As I walked in the door I passed a case listing all the famous writers that have graced the halls of this remarkable structure. The list includes Pulitzer Prize winners Tennessee Williams, William Faulkner, and Richard Ford. Truman Capote claimed to have been born there. He wasn’t, but it makes a good story. I’d like to claim to be the first dance critic/spa writer to have stayed there. If Capote can get away with it, why can’t I?

Located on Royal Street in the center of antiques district, Hotel Monteleone is only one block away from the 24/7 party on Bourbon street. One block the other direction on Chartes Street, and you will find yourself gazing at Ansel Adam’s work and the like at the A Gallery, a renowned spot for fine photography.

You don’t need to leave the building for a fabulous meal. Chef Buck’s delicacies are a regular feature in the Hunt Room Grill the Monteleone’s famous, but cozy restaurant. As a non-seafood eater I was a bit concerned about what I was going to be eating for five days. The Black Angus Sirloin with crimini and shitake mushrooms, roasted garlic, and caramelized shallots put those fears to rest. For the shrimp and crab-loving folk, the choices are divine according to my dinner partner. The heavenly turtle soup is a must try and don’t forget to leave room for the Amaretto Crème Brulee, a house specialty. Much of what you have heard about New Orleans food is true; it’s not lean cuisine. Keep in mind that it’s a walking city and you will be clocking in hours on your Adidas to burn off all that remoulade sauce. Plan to stay up late for a night cap at the famous Carousel Piano Bar and Lounge. And yes, it does spin, one revolution per 15 minutes. The good news— you won’t notice no matter how many Sazeracs you have. (A Sazerac, a favorite New Orleans cocktail, combines bourbon, licorice liqueur, and bitters.)

Should you venture out for a stroll know that you are a stone’s throw of some of New Orleans’s finest eateries including Arnaud’s, Brennan’s, and Galatoire’s. Don’t skip (no matter how much you ate) the Bananas Foster at Brennan’s. Chef Paul

Blangé created this world famous desert in 1951. Apron’s off to Brennan’s for impeccable service, extraordinary food, and fabulous flaming bananas, on day two of re-opening.

The elegant in-hotel Spa Aria is separately owned by Sandy Blum. I started my day on a suitably exotic path with the Moroccan Cocoon with Rassoul, an ancient magnesium-rich mud treatment from North African. Weeks later my skin still feels soft and healthy. Spa Aria is wild about the Pavonia line, and for good reasons, they are on the leading edge of botanical spa science. The Myoxy-Caviar facial, (think crushed pearls) promises cellular renewal continues to be a top treatment. My visit concluded on a wonderfully decadent note, The Aria Ultimate Pedicure, compete with rose-pedaled water bath, some serious exfoliation, and a special rejuvenating mask. My toes are now the color of shrimp Creole which is about as close to seafood as I got on my trip. Spa Aria was the first to re-open in the French Quarter after Katrina. “People needed what we had to offer more than ever,” remembers Blum on those first few incredibly trying weeks after the storm. “It wasn’t easy to re-establish a staff, but somehow we did it.”

There’s more to New Orleans than the French Quarter. I headed off to the Marigny Manor House, a stately Greek Revival Sidehall Cottage located in the heart of the Faubourg Marigny. Don’t let the “cottage” word fool you; in 1848 cottages resembled mansions and this is one antebellum jewel. With its original cypress doors, crystal chandeliers, and period silk and ecru lace window treatments, I felt like French nobility. Owners John Crew and Gilbert Rome double as historians, and filled me on everything from the most authentic pralines (at Loretta’s next door) to the best local restaurants. Crew and Rome, both New Orleans insiders, are full of colorful tales of life in the Big Easy. The bohemian feel of the Marigny makes it my kind of place. Chic restaurants and jazz bars are just footsteps away on Frenchmen Street and if that’s not enough, the French Quarter is a quick five-block walk. Famed jazz joints, Snug Harbor Jazz Bistro and The Spotted Cat are located right up the street. Friday nights you can catch the fabulous Jazz Vipers at The Spotted Cat.

Jazz isn’t the only thing happening in New Orleans. Check out the Tsunami Dance Company. These folks created a work about Orpheus drowning before Katrina hit. Talk about mysterious coincidences. Currently the troupe is at work on a new venture called Portraits in a Forgotten City. New Orleans Ballet Association brings in all kinds of dance troupes This past season included the Houston Ballet, Savion Glover, American Ballet Theatre Studio Company, and Ron Brown’s Evidence. Delta Festival Ballet held a sold out Nutcracker this year complete with the Louisiana Philharmonic Orchestra. Keep an eye out for the New Orleans Ballet Theatre, another up and coming dance company under the direction of Gregory Schramel and Margorie Hardwick.

Although the sliver by the river was relatively untouched, 80% of the city was flooded. The disaster tour is optional; I went for the option and toured the ninth ward and St. Barnard Parish with a friend. Gray Line offers an official tour should you feel like you need to be in the hands of a pro. Never in my life have I been so close to so much devastation; the reminder to me is that our work helping this one-of-a kind city is not over. So many people from all over the U.S. reached out to help Katrina victims. You opened your homes, hearts, and pocket books to the fine people of Louisiana and Mississippi. Now you have a chance to continue your generosity and have unforgettable time in the process—your table is waiting.