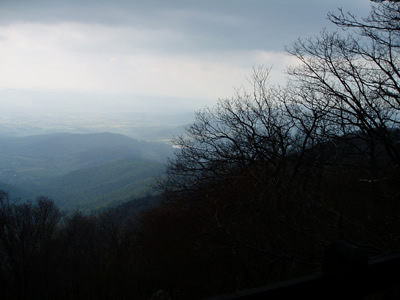 As if that word weren’t melodious enough, consider its meaning, derived from an Indian creation legend: “Valley of the Daughter of the Stars.” The beauty of the place—Virginia’s Shenandoah Valley—matches the beauty of its name.

The valley stretches almost 200 miles, from Winchester in the north to Roanoke in the south. To the east lie the Appalachian and Blue Ridge Mountains; to the west are the meandering Shenandoah River, the Alleghenies, and West Virginia. And crowning the valley is Shenandoah National Park. Not the country’s largest or oldest, the park, which runs like a ragged ribbon from northeast to southwest, is certainly one of the most lovely—and least crowded.

Shenandoah National Park, together with its neighboring communities, is a magnificent vacation site almost any time of the year, though it gets its largest number of visitors during the fall foliage season. The park itself as well as the nearby sights outside it (there are no towns or businesses in the park) are both well worth a visit.

The native peoples knew Shenandoah well, although they used the area for temporary camps rather than permanent villages. By the 1700s—with most of the natives departed or dead of diseases introduced by the whites—German, English and Irish settlers—arrived, farming, running small businesses and lumber mills, and remained until they either voluntarily or involuntarily moved off the land when the national park was established.

But it was President Herbert Hoover, not renowned for much else, who began to see the possibilities of Shenandoah as a vacation spot, building his “summer White House” there in the late 1920s. Other vacationers followed, and in 1926, Congress authorized a national park.

Even before that, the Civilian Conservation Corps—the CCC, one of President Franklin D. Roosevelt’s New Deal measures to relieve the Depression—had begun building facilities: trails, picnic grounds, “comfort stations,” walls, etc. At any one time from 1933 to 1942, over 1,000 impoverished or unemployed teenagers and young men—the “CCC boys”—lived at camps throughout the region, learning new skills and building what today we call infrastructure. In 1936, Roosevelt officially dedicated the park.

The park’s backbone is the 105-mile-long Skyline Drive, which runs the length of the park (and, at its south end, leads directly into the much longer Blue Ridge Parkway). “Skyline Drive is an experience—it’s not a road to somewhere,” says Interpretive Specialist Claire Comer at the Dickey Ridge Visitor Center. Nobody could disagree.

The speed limit along the drive, completed in 1939, is 35 miles per hour—the better to see all its scenic and natural wonders. And, perhaps, to make you feel as though you were back in 1939.

What’s along Skyline Drive? A stop at one of the three visitor centers will get you oriented. Alongside are the woods, filled—depending on the season—with redbud and dogwood, azalea and mountain laurel, ferns and bright-hued autumn trees. You’ll see some of the more than 200 species of birds and probably white-tailed deer and squirrels; less probably, bear or bobcat.

If you stop at some of the 75 overlooks (built by the “CCC boys”), you’ll look out on range after range of mountains and foothills, though there can be haze or fog. Hikes along any of the hundreds of trails, both long and short, many of them level, can take you to waterfalls or the remains of former settlers’ dwellings—there are some 5,000 of these—and graveyards (over 100). Rapidan Camp, President Hoover’s “summer White House,” is at the end of a trail at Mile 52.8.

Rangers lead frequent guided hikes, and river kayaking and canoeing, mountain biking, fishing, and horseback riding are some of the diversions available for the energetic. The Shenandoah Mountain Guides provide a series of “outdoor adventures,” including trekking, rock climbing, and “basic outdoor skills,” all rated according to level of difficulty. (Schedules are available at 800.999.4714, or at www.visitshenandoah.com.)

Shenandoah National Park lacks the colossal geological formations of Western parks such as Yosemite or Yellowstone; after all, the Appalachians are among the oldest mountains in the world, meaning that they have been worn down by hundreds of millions of years of earth movement, erosion, and weather. What they have instead of monoliths is a different kind of beauty and the pleasures that a peaceful contemplation of nature and history bring.

But the Shenandoah experience isn’t complete without a visit to the park’s neighboring sights and towns.

Probably the best known of the sights is the Luray Caverns, a Registered National Landmark a ten-minute drive west of the park’s Thornton Gap Entrance Station.

Nonetheless, I found a lot to marvel at in this 64-acre underground city, where the temperature is always 52 degrees (bring a sweater).

The stalactites (hanging from the ceiling) and stalagmites (rising up from the ground) take amazing shapes and colors, ranging from white to buff to ochre to red. If you use your imagination—and you can hardly avoid it—you’ll see curtains, Egyptian columns, Inca carvings, Gothic pillars, redwood trees, animal heads, organ pipes…. A large, still, shallow lake called Dream Lake perfectly reflects the formations near it.

And just to add a touch of kitsch, there’s the Great Stalacpipe Organ, “the world’s largest musical instrument,” invented in 1954 by a Mr. Leland W. Sprinkle. A four-manual organ keyboard activates rubber-tipped mallets that strike carefully selected stalactites to create music. An automated system, like that of a player piano, performed “A Mighty Fortress Is Our God” for us. Your price of admission to the caverns also entitles you to tour the adjacent car museum and garden maze.

About 13 miles west of Luray is the New Market Battlefield Historical State Park and Hall of Valor Civil War Museum, a must for Civil War buffs. The site commemorates one of the more bizarre chapters in the war’s history, when the Confederate army called up 257 teenage cadets–almost the entire student body–from the Virginia Military Institute to prevent the Union troops from advancing up the valley. Amazingly, the young cadets won the battle, one of the last Confederate victories, at the cost of ten dead. A modern stained glass window commemorating those ten is housed in the museum, which stands at the top of the hill where the battle took place.

Among the most picturesque towns on our route is Staunton (pronounced “Stanton”), some 45 miles to the southwest along I-81. With a population of 24,000, Staunton is the oldest settlement west of the Blue Ridge Mountains in Virginia; the downtown’s brick sidewalks and charming Victorian-era buildings—cupolas, mansard roofs—are the immediately visible part of its attraction. Staunton also has the country’s oldest municipally supported band, a classical music festival (in August and September), some eight art galleries, and the American Shakespeare Center.

Almost next door to the Stonewall Jackson Hotel, recently renovated to its 1924 splendor but with modern conveniences, is the Blackfriars Playhouse, the world’s only accurate recreation of Shakespeare’s original indoor theater. Housing a repertory theater that specializes in (but doesn’t restrict itself to) the Bard’s plays, the playhouse also offers lectures, workshops, and young people’s camps. (If you attend a performance, be sure to ask for a seat with a back.)

Staunton was the birthplace (in 1856) of the nation’s 28th president, Woodrow Wilson, the only US president with an earned doctoral degree. The family home/museum, located on one of Staunton’s lovely tree-shaded streets, illustrates Wilson’s background (his father was a Presbyterian minister), his childhood, his presidency of Princeton University, and his two terms (including the World War I years) in the White House.

Continuing in the historic vein is the George Marshall Museum and Research Library in Lexington, another half-hour’s drive down I-81. Located opposite the parade ground of the Virginia Military Institute, the museum contains the five-star general’s archives, uniforms, his 1956 Nobel Peace Prize, his Jeep, and many exhibits illustrating his role in World War II. Lexington is also the home of Washington and Lee University, whose idyllic campus looks like something straight out of a movie set.

Just south of Lexington, past Foamhenge (we didn’t stop, but it appears to be a recreation—in Styrofoam, of course—of Stonehenge), lies The Natural Bridge of Virginia. Don’t be put off by the shlocky entrance area “attractions”: the Haunted Monster Museum, the Dinosaur Kingdom, and the Wax Museum. The natural bridge itself, surveyed by George Washington and once owned by Thomas Jefferson, is a staggering sight. Two hundred fifteen feet high and 100 feet wide, it spans Cedar Creek and the easy trail that leads down to it.

Further along the trail is the living history Monacan Indian Village, where costumed members of the tribe, the largest in the state, explain their customs and traditions. It’s a surprisingly authentic-seeming experience.

Roanoke, the largest and most southerly city in the Shenandoah Valley area, offers art, culture, and history.

As you drive into town, you won’t be able to miss the rambling Tudor-style Hotel Roanoke, originally built by Shenandoah Valley Railroad president Frederick J. Kimball in 1882 at the junction of two railway lines. The city, in fact, was created and even named by Kimball—or so the legend goes. Remodeled at various times and closed for a number of years in late 1980s, the hotel today bears many of the features of a late-1930s remodel—an evocative, wood paneled lobby, murals of Virginia history and Virginia dances, and a huge oval dining room, the Regency Room. A 1995 remodel added a conference center.

Roanoke’s history has been defined by the railroads, especially the Norfolk and Western, as Frederick Kimball renamed his two lines. So it’s appropriate that one of the major sights in town would be the Virginia Museum of Transportation, housed in the former N&W freight station and exhibiting enormous steam and diesel engines, railway cars (including a 1910 executive coach), plus other trains, planes, and automobiles.

The nearby O. Winston Link Museum displays the remarkable photographs, mostly of the railroad and the life it generated, of a photographer little remembered outside Roanoke. Roanoke is also a center for art, with several galleries and a collective of 17 artists’ studios housed in a downtown building, Studios on the Square. Nearby is the Art Museum of Western Virginia, featuring its collection of 19th- and 20th-century American work as well special exhibitions.

And if you’re in Roanoke on a Saturday, you can sample local produce and crafts at the Historic Roanoke City Market, held right downtown near the art museum and the artists’ studios.

The closest airports to the park are Dulles International, in the north, or Roanoke Airport, in the south. Driving distance from New York to Winchester is roughly 300 miles.

A variety of lodgings choices is available in the park. At its highest point, 3,703 feet, is peaceful Skyland, founded in 1888 by one George Freeman Pollock, Jr. Originally naming it Stony Man Camp, Pollock developed the area to accommodate city dwellers in search of vacation property; he laid on an elaborate schedule of entertainments including dances, costume parties, and of course hikes and other outdoor activities. Pollock’s original cabin, Massanutten Lodge, built and furnished in Arts and Crafts style and housing a permanent display on the women of Skyland, can be visited on guided outings with a park ranger. Skyland offers a variety of rooms and suites, ranging from older cabins to spacious, newer rooms with panoramic views.

Some ten miles farther south, at about the midpoint of Skyline Drive, is Big Meadows, site of Big Meadows Lodge, plus over 270 species of plants, including blueberries and wildflowers, and plentiful deer. The lodge’s main building, originally constructed in 1939, has 25 rooms, a dining room, a lounge, and a long porch with rocking chairs. The interior has its original chestnut paneling and, like Skyland Lodge, a stone fireplace. Some 72 more rooms are located in outlying cabins and modern motel-like buildings.

More lodging is available in ten historic cabins further south at Lewis Mountain Cabins as well as at several campgrounds. Most of the facilities are closed during January and February.