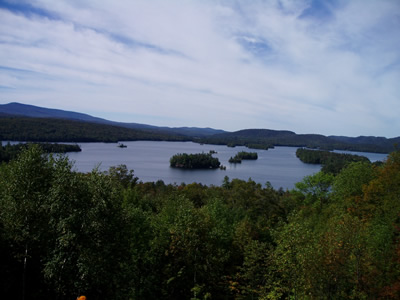 A look at a New York state map shows a large, almost bare area in the state’s northern triangle. Compared with the rest of New York, there’s hardly a major road. Instead, there are lakes, rivers, mountains, small towns; and, on my map, the word “Adirondacks” printed in faint pink.

The area is home to Adirondack Park, the largest United States park outside of Alaska, its size surpassing that of Yellowstone, the Everglades, Glacier Park, and the Grand Canyon combined. The park was created by the state legislature in 1892; its charter includes the “forever wild” clause: “The lands of the state, now owned or hereafter acquired, constituting the forest preserve as now fixed by law, shall be forever kept as wild forest lands.”

And yet, the Adirondacks (the name, a derogatory Iroquois term for their neighbors the Algonquins meaning “bark-eaters”) includes famous ski areas and resorts (at Lake Placid and elsewhere); historic towns like Saranac Lake, where treatment for tuberculosis in the pre-antibiotic days was pioneered; famed “great camps,” the luxuriously rustic resorts where the likes of Rockefellers and Vanderbilts spent their summers; and large businesses such as logging. The state-owned forest preserve combined with privately owned lands comprises the six-million-acre park.

Telling the story of the Adirondacks for the past 50 years—it celebrates its golden anniversary this year [2007]—is the Adirondack Museum, located in the village of Blue Mountain Lake. By “story” I mean the human, the natural, the cultural, the historical—all of those stories and more. The National Geographic Traveler called the museum the “Smithsonian of the Adirondacks.”

When we think of museums, we usually think of a building. The Adirondack Museum is more like a small college campus, or a tiny town with a varied assortment of structures, outdoor spaces, and views. Constructed on 32 acres of ground, it has 22 exhibit areas, a café, and a shop with a magnificent collection of books, among other items—including my favorite souvenir/gift, the “balsam pillow,” a tiny, fragrant stirrer of memories. (When I was a child in the Adirondacks, we called them “pine cushions,” and for a three-cent stamp we could mail them to our friends back in the city.)

You enter the museum, at the Visitor Center, which, together with buildings housing the store, the auditorium, the education center, and the Lake View Café more or less form the museum’s perimeter. These are contemporary structures; but the grounds also contain a 1907 schoolhouse, an early 20th-century artist’s cottage, a “rustic privy,” and an 1876 log structure originally part of the Blue Mountain House, a resort formerly located on the site. Also on the grounds is a pond, picnic tables, a fire tower, a gazebo, and a terrace from which you get lovely views of Blue Mountain Lake.

When leaving the Visitor Center, it’s hard to decide where to go next. Maybe the Marion River Carry Pavilion, with its locomotive and passenger car (plus a steamboat), and a diorama depicting steam and rail transportation in turn-of-the-last-century Adirondacks? Or directly clockwise to “Boats and Boating in the Adirondacks,” with its dozens of canoes, speedboats, and the iconic Adirondack guideboats, plus the interior of a boatbuilder’s shop?

Among my favorite exhibits, next door to the boats, is “Living with Wilderness,” which depicts the human history of the region from the 1500s to very recently, plus the changing human attitudes towards wilderness. One of its highlights is the Photo Belt, a moving belt of selections from the museum’s 68,000 photographs, arranged by subject: hotels and resorts, villages, lakes and ponds, etc. Also in this building are articles relating to the “wilderness cure” for tuberculosis developed in Saranac Lake, including an Adirondack Recliner, or Care Chair, a cross between a recliner and a hospital bed, such as were used in sanatoriums; and the Trudeau Cutter, a sled that belonged to Dr. E. L. Trudeau, initiator of the cure.

Still moving clockwise, you come to Sunset Cottage, its exterior trimmed with mosaic twig work, one of the hallmarks of Adirondack rustic furniture and construction. The cottage, like many of the other old buildings, was brought to the museum grounds from elsewhere in the park, in this case from Camp Cedars on Forked Lake.

Two side-by-side exhibition areas are located next door to the café. The first is “Woods and Waters: Outdoor Recreation in the Adirondacks,” with its displays on camping, mountaineering, fishing, hunting, and, of course, the Winter Olympics (Lake Placid is the only site ever to have hosted two of them, in 1932 and 1980).

Next door, when I visited, was “’A Paradise for Boys and Girls’: Children’s Camps in the Adirondacks.” For generations—and of course to some degree still today—city children like my brother and me were sent to summer camp in the mountains. The exhibit includes recorded memories of campers, photos, camp uniforms, and much else, including a section on the approximately 10% of some 300 summer camps that were intended for Jewish children. It brought back memories of the bad old days when the New York Times’s ads for summer camps often included phrases like “close to churches,” code for “Jews not wanted.”

Further along is Bull Cottage, with wonderful displays of Adirondack rustic furniture, of which the best-known but by no means only type is the much-adapted Adirondack chair.

One early September weekend I visited the museum during its Rustic Fair, when dozens of artisans exhibit (and sell) examples of their handicraft, ranging from simple Adirondack chairs to an elaborate, almost baroque pool table, which was promptly snapped up by the owner of an Aspen vacation home. Live music, food, and demonstrations were also available.

The Adirondack Museum features programs such as lectures, children’s workshops (knot tying, toy boatbuilding, paper-making), and an antiques appraisal day. The 2007-8 season includes special exhibits on “Nature’s Art,” rustic furniture, and great camps. And it will get you ready to tour the Adirondacks with greater appreciation and understanding.

The Adirondack Museum is located at Rt. 28N/30, Blue Mountain Lake, New York; phone 518-352-7311 or click on http://www.adirondackmuseum.org/. Hours are 10 a.m. to 5 p.m. seven days a week from Memorial Day to the middle of October, then weekends for the rest of October (check the website for exact days). Admission is $15 for adults, $8 for children 6-12, and free for children 5 and under. Admission is good for two successive days.