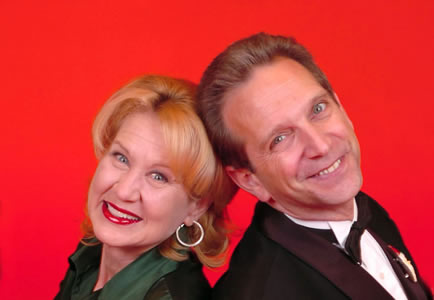 All that’s missing is the martini. “A Little Cole in Your Stocking,” the holiday cabaret revue at Aurora Theatre in Berkeley through Dec. 30, has a lot more going for it than the name. The husband-and-wife team of Billy Philadelphia and Meg Mackay deliver a chunk of the Cole Porter songbook, all wrapped up in Christmas ribbon (and a few non-Porter holiday tunes). “It’s delightful, it’s delicious, it’s de-lovely.”

Philadelphia, a nice Jewish boy who, for some forgotten anecdotal reason, took the name of the City of Brotherly Love years ago, and his wife, a mainstay of Bay Area musical theater, make a nice pair, onstage as well as off. She can wrap her velvety alto around a lyric like “In the Still of the Night” (the musical highlight of the show) until you are mesmerized. She’s a belter too, when the occasion calls and it called in “I Hate Men” from “Kiss Me Kate” as well as “Most Gentlemen Don’t Like Love” (“they just like to kick it around”). A better accompanist than singer, Philadelphia makes up for his raspy voice in enthusiasm. He did the difficult “Brush Up Your Shakespeare” (also from “Kate”) proud as well as the funny, but seldom-heard “Tale of the Oyster.”

Aurora wisely has kept the stunning backdrop of bare trees from its recent “The Ice Glen,” decorating the branches with colored Christmas balls and, when lighting designer Jim Cave’s illumination grows dim, twinkling lights. A Persian rug thrown over the main playing area, a piano and the stage is nicely set. Some extraneous holiday shtick is thrown in in honor of the season and the whole thing winds up with a “White Christmas” sing-along (courtesy of Irving Berlin).

For somebody who famously lived with one foot in the closet, Porter wrote most convincingly – if sometimes cynically — about love between the sexes. “Easy to Love,” “What is This Thing Called Love,” “Night and Day,” “Begin the Beguine,” “So in Love,” “I’ve Got You Under My Skin” have become staples of the standard repertoire. Equally at home in Paris, Venice, Manhattan and Hollywood, he was famed for his wit and sophistication. He also was master of the internal rhyme and the double entendre (“If she says your behavior is heinous, kick her right in the ‘Coriolanus’ da da da da da da Brush Up Your Shakespeare” etc. etc.}

It’s all a lot of fun and, if Mackay’s delivery makes some of the songs sound like the one that went before, oh well “It Was Just One of Those Things.” Now, about that martini …