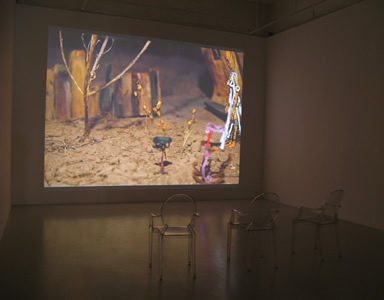 More and more artists are working with the medium of video, so much so that on a recent gallery tour through Chelsea, it seemed like every other gallery had a video installation. Heavyweights such as Robert Wilson represented; he had Voom’s assistance on his filmic “portrait” of Winona Ryder, and a matrix of screens featuring an adorable snowy owl. And there was Stan Douglas’ ambitious hi-def Western film and photo installation at David Zwirner’s cavernous new complex. But the much smaller standout show was Paulina Hollers, by Brent Green at Bellwether. His films straddle handmade art, stop action, and digital. Artifacts of his working process are traced with scotch tape and handwritten inventory numbers. What seems to be a model of an abandoned house turns out to be his actual childhood home in Pennsylvania, where his wheelchair-bound aunt Carlin is dragged around the house by a bunch of chickens. Nothing in recent memory has captured the familiar horror of nightmares like Green’s work.

Pisani, of France, uses male performers who look like they’ve never been in a dance studio in their lives. Like misbehaving children, these artfully scruffy geeks continuously checked on the audience to make sure we were paying attention. One began talking about taking off his clothes, and mercifully, that’s all it was – talk about how he felt while undressing, theoretically. In this slender, charming performance, the four took turns doing phrases in a “solo,” (like combing hair) and played time/space continuum games by predicting how long it would take to lose, and then find, oneself. Slender, perhaps, but not slight.

Mark Morris held his annual New York rep season at his Brooklyn headquarters this year, rather than across the street at BAM. One smaller premiere was included on a bill with three older chamber-sized works, accompanied by resplendent live music. The full effect was, unfortunately, too much of the same in terms of tone and dynamics. And the dancers are more used to projecting to a larger house, so the closely situated audience felt far too close to the dancers. The new work, Italian Concerto, featured a quiet solo by Morris, who at first appeared alongside new company member Dallas McMurray, oddly enough a dead ringer for Morris minus three decades. Morris seemed to be addressing mortality in this relatively somber (for him) segment, but he is always riveting to watch. It also served as a reminder to treasure gifts given even in over-abundance.

Oddly enough, it wasn’t the sleek, technically adept company that strutted its stuff the most on this two-city company’s opening night – it was the troupe’s boards (two, one for each city) and acolytes, puffed up proudly in their velvet blazers, jeans, and fur coats. Aspen Santa Fe Ballet has cracked the code to success for a chamber ballet company, something that particularly eludes its New York brethren, and ain’t just the dough. It chooses and programs repertory cannily, balancing the tried and hot (Jorma Elo and Twyla Tharp) and the newish (Nicolo Fonte, with a big assist from James Surls’ fantastic spinning, soaring sculpture). In a city with so much ballet and dance, I’m not sure there is the audience demand for such an animal, but they set the benchmark, should there be. Hopefully Cedar Lake is taking notes.